What tool would a Roman-age civilization have for the breaking of silver and other metals into dust?

Assume a guy who has a lump of silver, and needs to get it into really small pieces. Ideally down to dust level, if possible. The technology level of the society around him is comparable to late-roman (200-400 A.D).

From my research I already know, that they had no real steel, but high quality iron for the use in tools.

How can he produce tiny fragments of metal from a solid chunk?

Well, one way they could do it is to use a file, essentially a tool-steel bar with an abrasive surface, and rub it against the surface of an ingot of silver. This would produce a relatively fine powder though it would be a painfully long process to get a lot of it. Here is a video showing how The Romans could have made files

Another option is to dissolve some silver in Aqua Regia, a mixture of hydrochloric acid and nitric acid. Adding urea will then consume the residual nitric acid and ferrous sulphate to precipitate fine silver powder which can be filtered out of the solution. Assuming the Romans had access to these chemicals, they could use them in order to create a very fine silver powder. One thing to note, silver is resistant to Aqua Regia at room temperature. In order for the silver to be broken down, the temperature, pressure, or concentration of acid must be changed. Here is a link to an answer on Chemistry.SE which explains it.

Roman age? I can give you a stone age method: Grind it between two rocks.

When you are lazy, you might try to just throw your silver into a grain mill. It should work if the millstones are from a mineral which is harder than silver and if the mechanics are sturdy enough to handle the stress. The Romans had water-powered mills since the 1st century.

The trip hammer was historically used for this

First, this process is called comminution. In the most ancient of days, to break up an ore into small chunks to work it in a forge, you simply hit it with a rock hammer. Eventually, the process improved until some sort of mechanical power could be applied: enter the trip hammer. 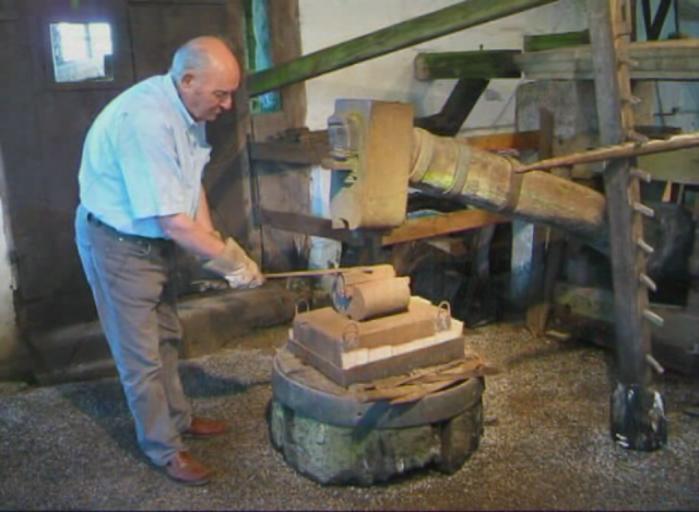 A water-powered trip hammer is essentially a very large hammer, mounted on a fulcrum, with one end (the helve) moved by a cam. The cam is in turn driven by a water wheel. Alternative, you could have a donkey or ox provide the motive force, though there isn't a lot of evidence that this happened. There is significant mechanical loss in older mechanical systems, lubricated with animal fat and made of wood. A donkey powered trip hammer probably provided no mechanical advantage to a slave with a sledgehammer.

The trip hammer was used for exactly the case you describe, pulverizing rocks to find gravel. The gravel could then be reduced in a furnace to extract valuable materials. This is historically how copper, tin, silver, and gold (along with rarer metals like antimony) were extracted and refined from ore.

As far as hardness goes; don't even worry about it. You can break up rocks using other rocks. Find a polish the hardest rock you can get, and use it as your hammer head. When it breaks, replace. In Roman times in the 4th century AD in Britain, there is an find of large iron hammer heads used for pounding ore.

The water-powered trip hammer is certainly in use in Han China by the first century BC. It is potentially in use in China several hundred years earlier, and there is sporadic evidence that it was used in the Roman empire from the 1st to 4th century AD. It returned to Europe in the 12th century where it achieved its widest use; and the mechanical principles behind its operation were crucial to the Industrial Revolution.

An alternative, used often in the Islamic world with limited access to waterpower, was the stamp mill, though this was not attested until the 10th century in Central Asia. However, creating a stamp mill is feasible with a Roman/Classical-era technology level.

Cupellation is the process of heating ores to separate noble metals (silver, gold, etc) from them. Silver is pretty reactive so finding silver by itself in nature is kind a hard so you are more likely to find it bonded with something like lead.

If your silver is still one solid chunk then all you need to do is heat it in a furnace and then cut or hammer it into smaller pieces. Or pour the molten silver into multiple canals that lead to multiple molds. Silver is a pretty easy metal to work with compared to iron and the Romans where already knowledgeable in iron working (Celts were better smiths however)

Smelting silver and silver working has been around since the bronze age so to someone with Roman tech smelting silver is a easy process. Heck the Romans where able to make alloys like pewter.

Silver can be formed into leaf almost as thin as gold with primitive technology. This is easy to break up.

Also with a few earthenware jars and dissimilar metal electrodes you could generate colloidal silver. This is of atomic particle size so that should be small enough for you. granted it will take some work to process a few ounces.

10
What aspects of a creature's hand would make it good for climbing but not good for tool use?
22
What would iron-age tools and weapons be like if they were redesigned with modern metallurgy?
39
What difficulty would the Roman Empire have besieging a fantasy kingdom's 49 m wall?
16
Would a Roman civilization be willing and capable of building large scale sea defences against a serious but unrealised flood threat?
4
Can Roman-age tech break up harder metals?
3
What items from the Roman-age tech-level could be used to deter all creatures from entering a small area?
37
What non-electrical, basic tool from today, could be made that would change the world in ancient times?
0
What kind policies, background elements and institutions would be required for a city to have 900,000 people in an Iron Age Setting?