How would tattoos for shapeshifters work?

So there is a species of shapeshifters who use a tattoo in a specific location on their bodies as a "belonging" indicator. Basically it is a symbol of group pride: it gives information about what the person's extended family and national groups are. The shapeshifters therefore like to show it off and will usually leave that portion of their body uncovered when they are in a form of similar shape and structure to their natural one (which isn't uncommon, since the closer you are to your "real" form, the more comfortable it is and the less energy it takes to maintain.)

How the shapeshifters generally work: these are shapeshifters with limited options, not "I'm a living puddle of goo and can turn into a vase" shapeshifters (looking at you, Odo). They (generally speaking) can't add or remove mass from themselves, just expand/compress it to a limited extent and reorganize it. They also can't turn into anything that isn't alive, and usually are limited to things that actually exist (and that they have personally seen/interacted with). At the moment the hand-wavy concept behind their shapeshifting is that there is a special substance in their blood that "fuels" (provides the energy for) the shapeshifting, and most of the cells in their body are stem-cell-like in that they can be turned into any other kind of cell at will (and can be multiplied rapidly if necessary). This also allows them some pretty enviable healing/regeneration speeds. As previously stated, they have a "natural" form, which is reverted to upon death or when the shapeshifter for whatever reason stops trying to maintain the altered form.

Obviously, there is a bit of conflict here, hence my question: how do you give people who can reorganize and regenerate the cells in their bodies a fairly permanent "tattoo"?

Mind you, I'm not asking how to make the tattoo visible in every form the person in in. I don't care if it disappears when they change into a dog or whatever. It might be covered by fur, or just gone, whatever. My primary concerns are these:

With the amount of cellular reconstruction and regeneration that goes on with this species, a human-style ink tattoo might fade faster than normal, or even disappear, and I want this tattoo to be pretty permanent.

Also, I don't want this thing to be super simple to fake. For instance, you could probably just "make" a "tattoo" using shapeshifting, but then you can rearrange the shapes and colors at will and pretend to be somebody you are not, and while this would probably be an extremely taboo thing to do, I would prefer if it wasn't that EASY. It doesn't have to be impossible, but not stupidly easy.

The only halfway realistic thought I've had was to use some kind of DNA tagging/imprinting that programs things so the tattoo will naturally reappear as cells refresh, but that is kind of high tech for something that is supposed to be a very old cultural tradition, so I'd rather find an alternative solution, if there is one.

You can replace the tattoo with a sub-skin implant or a piercing made with a shape-memory alloy.

A shape-memory alloy is an alloy that can be deformed when cold but returns to its pre-deformed ("remembered") shape when heated.

When a shape-memory alloy is in its cold state, the metal can be bent or stretched and will hold those shapes until heated above the transition temperature. Upon heating, the shape changes to its original. When the metal cools again it will remain in the hot shape, until deformed again.

No matter how the shapeshifter twists the metal part, as soon as it is taken to the proper temperature it will return to its original shape.

You can use the bodily heat of the shapeshifter as trigger, so that the body temperature of the individual will ensure the metal part to be in the right shape, or you can opt for an higher temperature to trigger the switch.

In this latter case the pain resulting from applying a high temperature on the body might serve as dissuasion from attempting to fool the system.

It may initially look like a tattoo to you, but in reality it's more like one of those overcomplicated handshakes.

It's a demonstration of how good the shapeshifter is at fine control of form and pigmentation, the way to tell it's not a normal faking it with a real tattoo is that if you look closely it moves.

The biggest reason not to use something permanent: They could fake it anyway. Given the ability to control pigment in such a fine manner, they could hide their own tattoo with a controlled one when they change form to impersonate someone else.

Given that ability, it has to be a matter of pride that they show their true colours in this way. There's no object, form, or marking that couldn't be overridden by their own abilities. The principle of those handshakes is that they can be learned, but they're not easy to learn. The same is true of the "tattoo", it takes half a lifetime to learn fully. It could be casually faked to a casual observer, but a member of the clan would know the specific design and transitions that would apply to that particular branch.

You might try something like fluorescing pigments made with plants local to the area - and whose production is a carefully guarded secret. Each clan will come up with different pigments that fluoresce in different manners. So if a someone wants to reveal that they're from clan X, they move cells loaded with this pigment to their skin, and then other people can see that it's this shade of blue in the sun, and this shade of red out of the sun. And if they have access to radioactive ores, maybe the pigment glows a third color when exposed to those.

There's the question of how these people came up with the pigments in the first place. This is going to involve some level of handwaving.

If they cannot simulate scars through shapeshifting powers, then scarification will work too. It's like doing 3D tattoos. 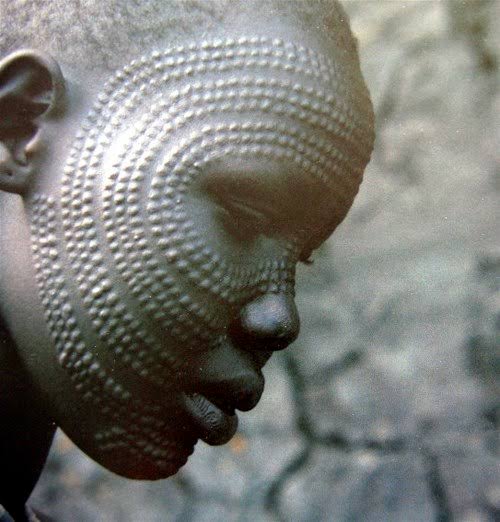 If they can change color and texture, forget tattoos and go for different body modifications.

You can display a group symbol by using one or more piercings. You can also connect the piercings with string outside the skin. That will still be there even when they shapeshift.

Or you can go really hardcore and instead of simple piercings, make sockets for large objects in your body and display them. People do it in Africa to show the tribe they belong to: 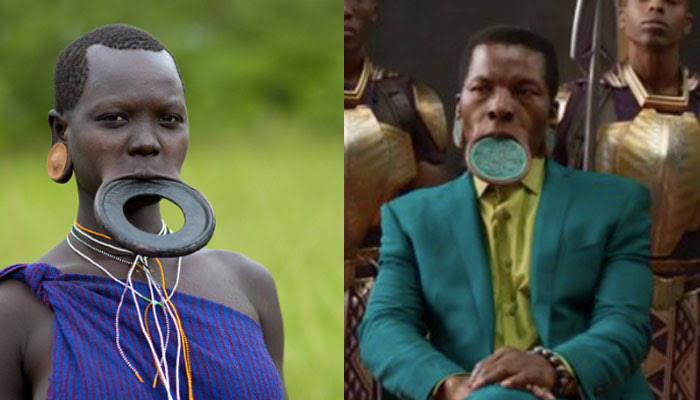 Not the answer you're looking for? Browse other questions tagged creature-design shapeshifters .