Can a planet have a different gravitational pull depending on its location in orbit around its sun?

As the title say, can a planet have a different gravitational pull depending on its location in orbit around its sun?

Is this explainable without magic?

There is however such a thing as tidal forces. Since all parts of a planet orbits the sun at the same orbital speed, even though only the centre of mass is fulfilling orbital equations, objects on the near side experience more pull from the sun that objects on the far side, since the near side moves slower than an object in circular orbit at that distance from the sun would, while the far side moves faster than an object at that side would. This is typically too little to be noticeable by people on Earth, though one-third of the tidal forecs creating ocean tides stems from the sun.

To make it word as you want, you would need the planet to be either far closer to its sun, compared to its mass, or being far bigger (creating a greater tidal difference between near and far side). If the planet has slow rotation, e.g. only having one day and night per orbit, it may be experienced as having lower gravity during the day than during the night. Or if the planet has a very eccentric orbit, the gravity differences between night and day will be experienced as greater the closer the planet is to the sun.

The major problem here is that any tidal force strong enough to be felt as noticably different gravitational pull will very likely tear the planet apart, not to mention creating extremely high and low tides. The latter may not be a problem if the entire surface of the planet is ocean (or if the planet is very plastic), since the inhabitants would move with the surface. Another result of such high gravitational pull is however that the planet will most likely be tidally locked, meaning it will always have the same tide facing the sun, same as our moon always has the same side facing the Earth.

You would need a planet that is made of extremely strong and/or very plastic material to make your idea work, and even then, there are likely to be associated problems such as extreme tides and extreme temperature differences between day and night.

Look at the schematic drawing below, where you see a planet and its Sun (not to scale), with two different places on the planet: one facing the Sun, the other on the opposite side from it.

Gravitational pull can be schematized with a vector, and the resulting pull is the result of the summation of all the pulls in a given spot.

Therefore in b the pull will be stronger than in a.

Also, during the course of an orbit around the Sun, the distance between the two bodies changes slightly, and as you know the distance plays a role in the equation for calculating the gravitational pull $F = G \cdot m_1 \cdot m_2 \cdot 1/r^2$.

However, the difference is normally so small that it cannot be noticed without sensitive instruments. When it becomes noticeable it means that tidal forces are so strong that the body is about to be disrupted.

I can think of a somewhat contrived way that this can happen, but it will be a smaller effect than you'd probably like, and with severe restrictions on the planet's climate and types of civilizations that could live there.

The idea is that your planet could be in a highly elliptical orbit that causes it to experience large temperature changes throughout the year. This in turn could cause the planet to expand and contract, thus changing its surface gravity (i.e. when the planet is closer to the sun, it would have a lower gravity on the surface, because its surface is physically farther away from its own center of mass).

Thermal expansion alone won't get you this effect on a rocky planet - solid volumes tend to increase only by about 1% at most even when subjected to temperature changes of 100 K (which is where you should probably draw the line as far as this planet being habitable is concerned). One workaround could be for the planet to have pockets of gas throughout its interior; when the planet heats up, pressure from those pockets could inflate the entire planet like a balloon. However, I'm doubtful that you could get more than a percent or two from this either, and it also comes with more details that need to be addressed, like why geological activity doesn't push most of this gas to the surface.

No, if you want to go the thermal expansion route, the best way I can think of is to have floating cities above a low-mass, gaseous planet (a gas dwarf). This is all conjecture since there are no confirmed gas dwarf exoplanets, but one with the mass of Earth, similar to Kepler-138d, could ostensibly be 80% gas by volume (60% by radius). Let's take a case where the average atmospheric temperature varies from 250 to 300 K based on time of year.

EDIT: Originally, I did some sloppy approximations and got 7% reduction in gravity. However, I didn't take into account the fact that, since the city is floating, it doesn't matter where the gas goes; the city will move to wherever it can maintain the same ambient pressure as the temperature fluctuates. This ends up yielding a much more significant effect, since pressure varies exponentially in gravitational fields.

I got severely carried away in the calculations here, and they got very messy, but in short: with the assumptions above as well as a mostly-Helium atmosphere, a city floating at a height of 50 km at the coldest part of the year could be carried up to a dizzying height of 1500 km in the warmest, decreasing the local gravity by a whopping 40%! That means people would be able to jump twice as high in the summer as in the winter.

Could be an interesting way to have the effect you're looking for, though the sky-city-on-a-gas-planet thing might be too specific for the setting you have in mind.

In order to have changing gravitation, you either need changing masses or changing distances.

Changing masses are only possible if mass becomes energy, for which you need rare phenomenons and which would not depend on orbit and not be cyclical.

But going for changing distances there are plenty of options, of which some have already been mentioned :

Try to think of the following white circles as a sun and another object. As you can see, this leaves us with an interesting orbit for your sun. If you now had a your planet orbiting the two objects, the distances would of course change.

And, last but not least, a sun next to a black hole simply gives darn picturesque images (Image source : https://phys.org/news/2010-07-black-hole-big.html, see for original source) 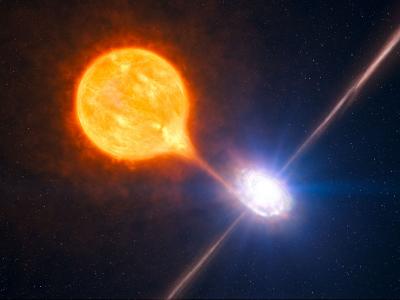 Alternatively, you can have other objects in space affecting gravity, such as large gas planets - see https://en.wikipedia.org/wiki/Lagrangian_point

For instance, the tidal forces on our earth are caused by our moon.

In the meantime, just enjoy the orbit between Pluto and Charon (Image source : NASA, I assume - https://imgur.com/LgWwoQh) :

You could change the distance relation of the gravitational force field. In the real world it decreases quadratic with distance F=F(r^2) but you can change that to any function you like. Something higher order like r^3 and above will have more turning points. You could put your planet in a distant of such a turning point and depending on your coefficients the resulting gravitation on the closer to further sunside would be different. Does that make sense?

A single planet won't have a noticeable difference unless you can change its mass or shape wildly.

However, a second planet orbiting within another plane, the opposite rotation, or forming a binary pair could apply great additional gravitational forces at different positions in the first planet's orbit.

Not the answer you're looking for? Browse other questions tagged planets science-fiction gravity solar-system rogue-planets or ask your own question.

23
What major event could disrupt planet Earth's orbit around the Sun?
7
Can a dual planet have an orbit around the Sun similar to Earth's?
11
Can one or multiple moon(s) pull the sea around my planet?
2
What are the realistic problems of a planet orbiting too close to its sun?
2
The effects of gravitational pull in a solar system with a pendulum Sun
6
In what ways would the earth's orbit/atmosphere/ocean currents have to be different in order to create summer with long nights?
7
Can a rogue planet have a habitable surface due to geothermal heat?
2
Can periodic gravitational tug and pull of binary star ensure that a planet stays extremely tectonically active?