Can spiky arm guards/bracer be an alternative weapon for blunt attack or will wielder get broken bones upon hitting?

Basically what's in the title: If someone uses a spiky arm guard/bracer (long bracelet type armor not gauntlet) while bashing/battering an opponent (with or without armor) would this result in the wielder breaking their arm or bone or could they do it without harm to themself?

The spiky arm guard/bracer in my mind is made entirely of metal, either bronze or steel, with many similar size spikes surrounding it and another like a spiky mace which has some gaps and fewer spikes also can have different size for each spike. I think maybe a leather arm guard/bracer with metallic spikes would help absorb the impact to reduce harm to the arm upon attacking, or am I wrong?

And another with two layers with the outfacing part having spikes that are a bit loose so a straight or a hook punch can make a twirl or drill like movement to the spike that can chip off the opponent that makes contact with the arm guard.

Some alternative suggestions for design are welcome.

With many similar size spikes surrounding it 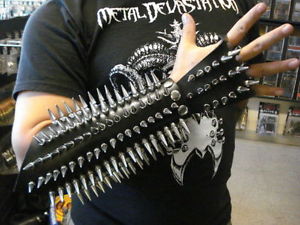 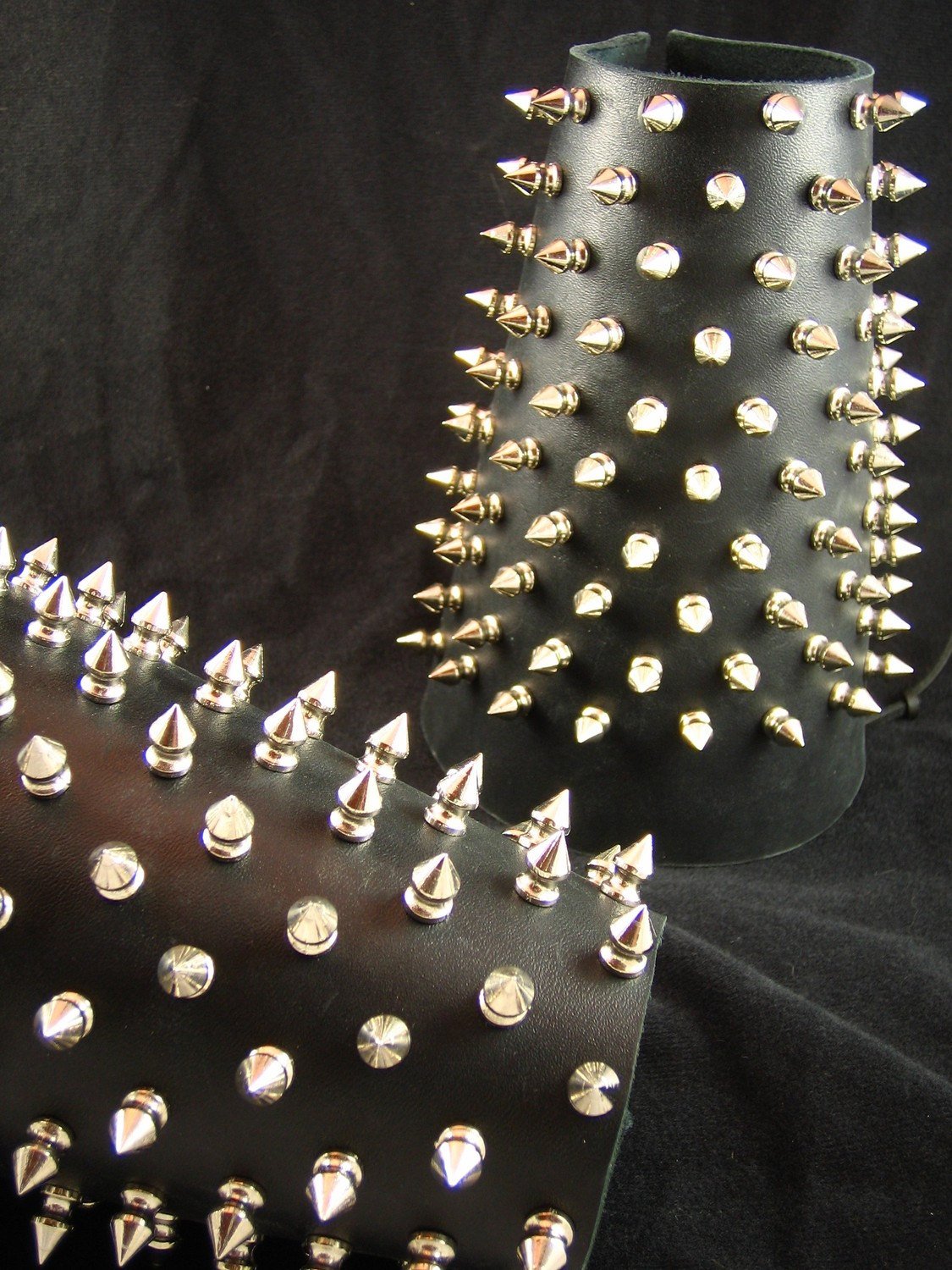 Spiky Mace Type which has some gaps and fewer spikes also can have different size for each spike, just imagine the previous arm guard/bracer above and replace the spike or the pattern with this one. 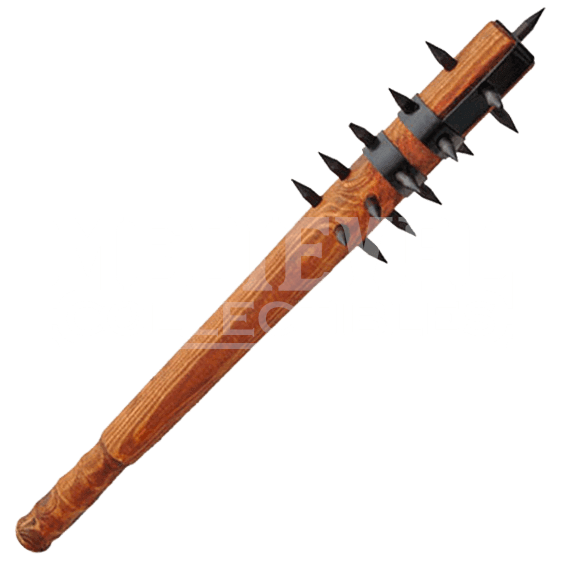 No, they would not.

There are several issues with trying to use a weapon like this.

First, as you identified, the user may end up with broken bones. The bones in your wrist are relatively delicate as it it a joint. Putting a piece of metal on there and hitting something hard could injure you at best or break the bone.

Secondly, even if you could use it without risking harm to yourself, you wouldn't want to anyway. The reason being is power generation. A weapon, such as a mace, is something known as a force multiplier. As weapons have mass, can be accelerated relatively quickly and typically have a small contact point, they amplify the force you can put behind a strike massively. However, these metal forearm spikes don’t add much more mass and are not accelerated faster than your forearm. This concentrates the force of you swinging your arm on a smaller point but does not generate additional force.

Finally, these spikes would not be able to pierce through armour. Not an issue against an unarmored opponent but they would do nothing against one with some kind of protection. This is because the spikes cant be overly long or else you’ll be stabbing yourself any time you walk.

Now, if you wanted some weapons for punching, I suggest the push dagger (also called a punch dagger) or katar (the weapon, not the place). These are daggers which you hold in your hand and you punch with them as though you were boxing. The katar is the more advanced weapon of the two as it has an ‘H’ shaped guard with two bars to prevent it from twisting in your hand. If you wanted something larger, I suggest the pata, a gauntlet with a sword blade attached. The pata is similar to a rapier, mostly a thrusting weapon but you can do cuts with it as well.

Finally, of you were dead-set on having a spiked forearm weapon, I suggest you look at the bagh nakh, also called the tiger claw. As its name implies, this is a weapon with blades that curl backwards. This was meant as a tool for climbing trees but it doubles as a weapon, it is held in the palm of the hand.

You could have spikes like the bagh nakh does on your arm guard which overcomes some issues I mentioned earlier as a blade does not need much force to deal a lot of damage.

The cestus is kind of close, but not as spiky. 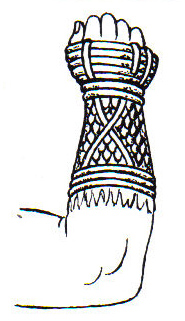 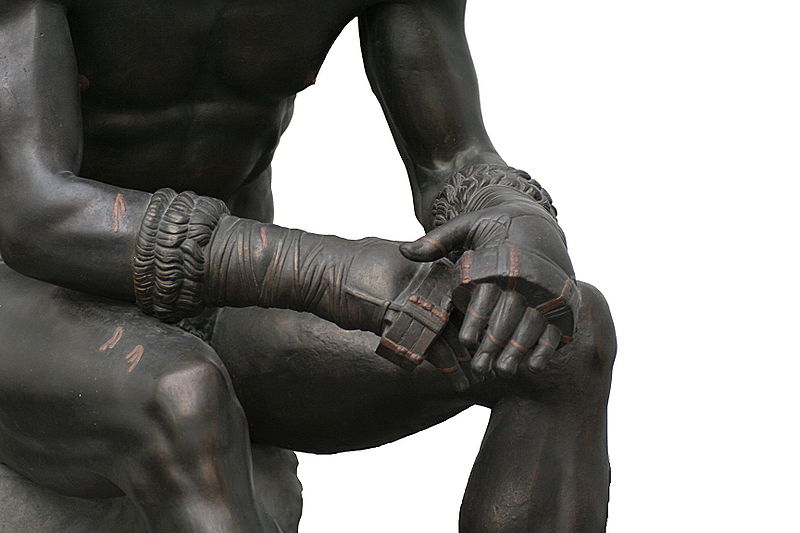 I think it depends on the method of attack.

If you where to use your forearm as a club, then you’d break it against hard materials like skull or helmets. But against someones stomach, chest and face, it is a standard strike to an opponent beside or behind you.

Your spiky vambraces are more for defense and used to block attacks and strikes. But, if the spikes are sharp, then sawing strikes at meaty bits like thighs, groin, tummy,neck, and eyes will be effective at incapacitating some one.

I would think of these as intimidators, having more psychological value in discouraging someone to fight you than as really effective weapons.

The spikes would not assist in the block of a blunt weapon. Consider that maces and war hammers were designed to cause trauma through plate mail. Fundamentally, they just have a lot of momentum, and you have to deal with that.

Such spikes could be useful for a softer art, though. You still could not block a mace, but you don't always have to block it. All you have to do is deflect sufficiently such that it doesn't hit you. Consider how hard it is to use a blunt weapon against a piece of paper floating in the breeze. Why? Because the paper doesn't offer much resistance. The spikes on your gauntlet might break if you are holding your arm rigid, but if your arm is relaxed, it can't break them without moving your arm substantially.

Now for blocking, that's a non-starter, because your goal was for the arm to not move substantially. However, for many martial arts moves, you don't need that. The power of such moves is that, at the end of the opponent's swing, they thought they had complete control of the weapon and could bring it back. Now you have a bunch of spikes helping you hold onto the weapon as you twist and turn it.

(Caught with something behind you so you can't move out of the way? Well... then you really did need to block... and you're really out of luck!)

This reminds me a bit of the nine rings we find on the back of some Chinese Dao. One of the uses for them was to make it easier to bind the enemy's sword with the backside of your blade. Mind you, I find the Dao a whole lot more practical, because the funny-bits are on a piece of metal you have in front of you, rather than on your irreplacable arm, but that may just be me! 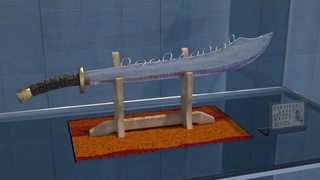 Not the answer you're looking for? Browse other questions tagged physics weapons martial-arts or ask your own question.

32
What would be the most effective melee weapon against heavily armored opponent?
68
What (modern) weapons could be used to destroy skeletal enemies as completely as possible?