Most dragons (before Skyrim and GoT) had six limbs in total, four legs and a pair of wings.

The question is how would a dragon's forelimbs be placed? It's obvious they have good terrestrial capabilities, without having long noodle legs. But then there's the flight muscle, it needs lots of space and a large attachment site, same goes for the wings. But how should I put the front legs on the dragon so that it doesn't interfere with the wings' motion? Sure, those things only move during climb out, but it' still troubling. Whatever I choose should be compact.

How and where would the front limbs of the dragon connect to the rest of the skeleton?

Im not an avian biologists so i do not know if this configuration would be biomechanically sound, however it may prove to be some help to you. 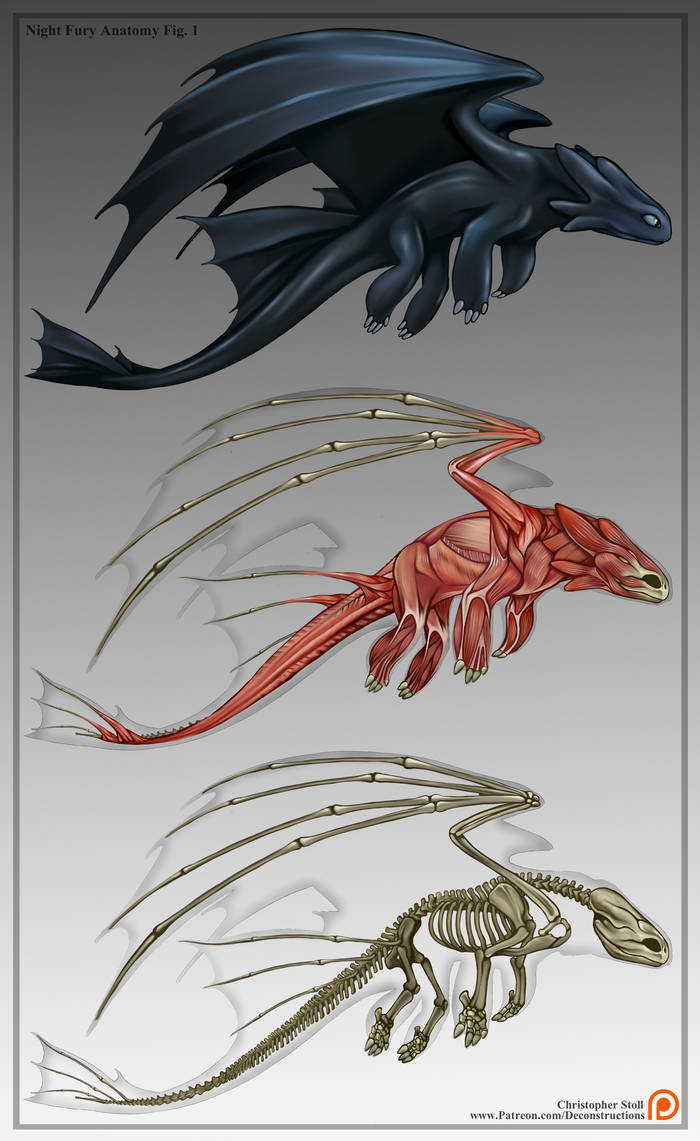 Shown here is a break down of the skin, muscle and bone layers of Toothless from the How to Train Your Dragon series. This image clearly depicts how and where the bones connect and where the muscle attatches to the skeleton. As i mentioned, i am not an avian biologist so i do not know if this setup would actually be functional in the real world, you may very well be able to draw inspiration from this though.

Edit: As you specified for an image containing the pectoralis, i found another one that depicts it.

Making a 6 limbed creature from a tetrapod body plan is tricky. WB stack is littered with efforts on this front. Here is a new idea. 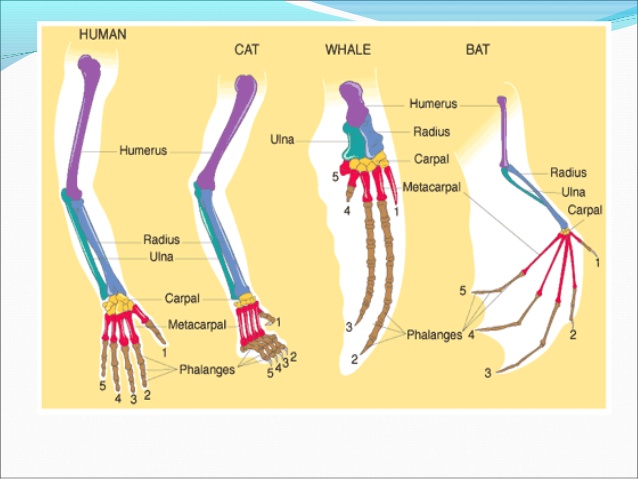 Look at the whale. Now imagine splitting the distal forelimb into two limbs: one with the radius as core and the other with the ulna. The radius and associated digits (5 at baseline but you can add more digits; polydactyly is fine) becomes the robust wing, availing itself of the scapula and other support structures.

The ulna also has digits and is much less robust. It would not be a stocky limb to match the hindlimb but something more like a Tyrannosaurus. These small forelimbs would touch the ground and allow ambulation but for fast motion they are not the equal to the hind limbs.

Having powerful back legs, powerful wings and spindly forelimbs means these dragons would not look like Toothless or Smaug.

The problem with wings is the necessary amount of power to lift the creature.

This is a bird skeleton: 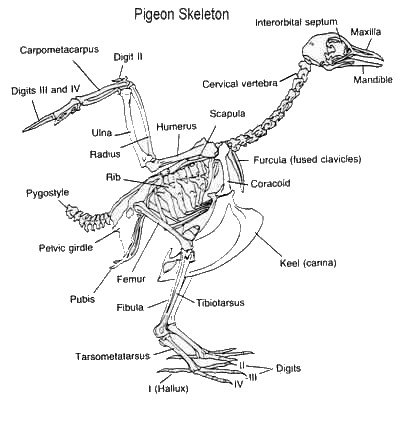 Note the size of the sternum (the bone that all your ribs connect to). It's massive in comparison to ours and stands far out of the chest while a human sternum is basically flat in comparison. This sternum is what your pectoralis major muscles are attached to (the chest muscles).

The sheer size is because the muscles attached to it, shown here: 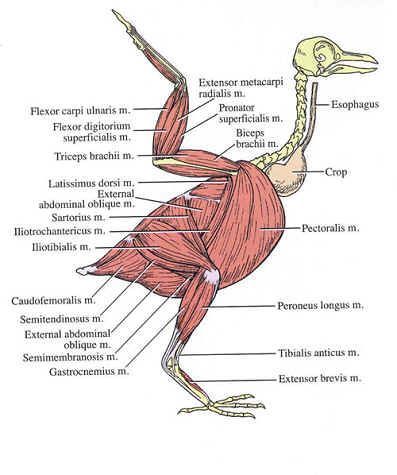 These absolutely humongous muscles are required to lift the weight of the entire creature up in the air, and the larger the bird the more % of the bird must be pectoralis major muscles just to keep it in the air due to the square cube law, but you can ignore this for the sake of cool. Despite this suspension of belief on the part of the square cube law you still want a bodyplan that can handle 4 paws and 2 wings simultaneously.

Note how these skeletons lack a large scapula. In the first picture you can see it mentioned but it's tiny and largely immobilized because everything is focused on that up/down movement of the arms, not about reaching forwards, backwards, upwards or downwards.

Having to have muscles attached to the chest for these extra appandages would diminish the amount of muscles for your wings. You could slightly circumvent this through kinematic chains.

An example of a kinematic chain is your quadriceps of your leg, or any other muscle that moves over more than 1 joint in the body. If you have muscles pull on one end of the bone they are attached to, you can use that to pull on the quadriceps, the quadriceps us that to pull on the muscle one joint removed, allowing you to transfer the muscle power from one bodypart to another. You attach a portion of the pectoralis major muscles to the dragon's leg, and have muscles above it attached to the wing (likely an adapted version of the triceps, romboideus, one part of the deloideus and trapezius). When flying the leg will be pulled down in the same motion as the wings and the muscles above that will simultaneously pull on the wings, allowing you to transfer the muscle power that went into the leg into the wing as well. This isn't wildly efficient and would likely make the leg flop up and down with the wingbeats, but it's an option. Ofcourse if you time it right and pull just as hard on the leg as on the wings, the leg would effectively keep still during flight. Although you'd be better off pulling it in as it would stretch the muscles above it and with that pull the wings.

Any depiction by Larry Elmore should suffice. More like angles; their forelegs are actually arms, and the wings protrude from their back, beginning just below the shoulder blades. 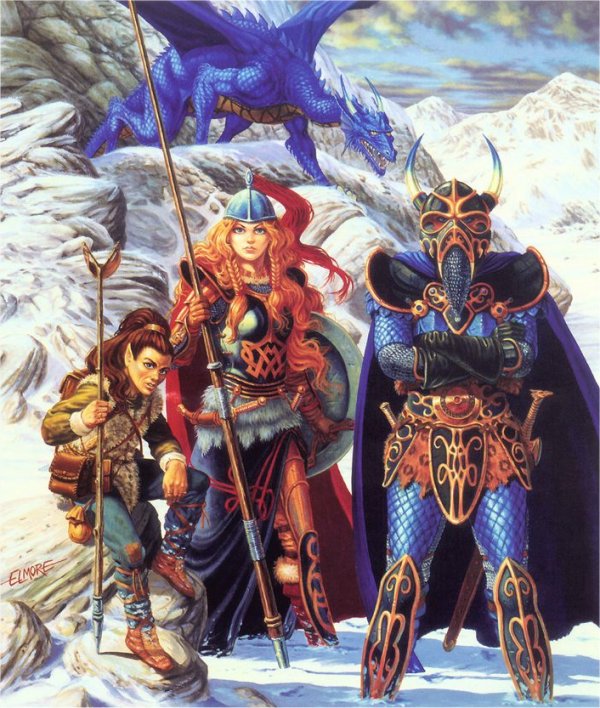 Dragonlance's blue dragon, Skie, as pictured by Larry Elmore in the original cover art for, Dragons of Winter Night.

Not the answer you're looking for? Browse other questions tagged science-based creature-design dragons bio-mechanics .

28
How would you design a dragon-like creature so it could sew?
8
Would it be possible to rearrange a dragon's flight muscle to somewhat circumvent the square-cube law?
5
Dragon with pseudo-wings, is this viable?
4
Where would padding inhibit a limb's movement the least in a quadruped creature?

8
Giving dragons more flight muscle
8
Would it be possible to rearrange a dragon's flight muscle to somewhat circumvent the square-cube law?
4
Where would padding inhibit a limb's movement the least in a quadruped creature?
9
How could dragons effectively use their wings as weapons in ground combat?
16
Dragons have a constraint on muscle mass that isn't dedicated to flight. What's the best natural physical weapon for them?
2
How could dragons use their forepaws as hands?
4
Increased flexibility for dragons?
15
What would martial arts for dragons look like?
2
Does this dragon martial art move make sense?
2
Can I justify dragon limbs having hollow bones that are larger than what would be needed to support their weight?