What would a lethal laser attack by a sorcerer look like?

In a magic system that allowed the manipulation of energy by sorcerers, what would a bystander observe during such an attack? Some details are relevant:

if the laser is observable, what would its color be, presuming it is within the range of lasers "hot enough" to cause fatal damage to the target? I've read that blue lasers are apparently hotter than others.

If the laser has a wavelength in the visible spectrum of light, as a consequence of the scattering you will see that very color, like in the picture below for a green laser. If it is outside of the visible spectrum, i.e. IR or UV, you won't see a thing, unless it is so energetic to excite light emission from air. 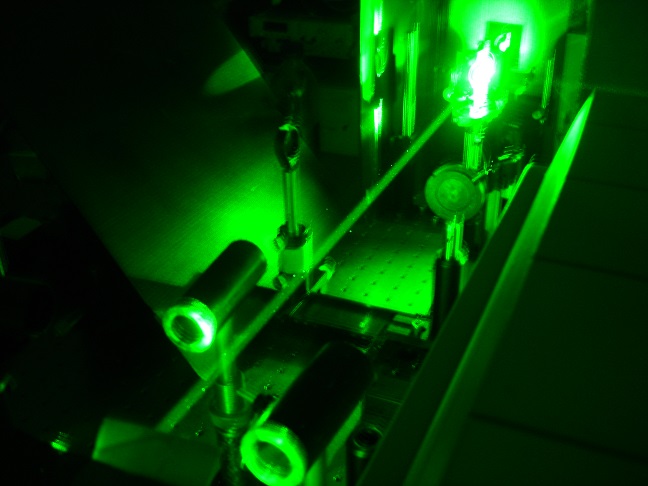 For a laser the concept of "hot enough" is not dependent on the wavelength, but rather on the energy. If you deliver enough energy to the target, you have significant effects on it.

What would be the observable effect on the target at the point of impact? Would we observe charring, or something more explosive as liquids are super-heated?

Back in my university days, while I was working with a 10 mJ, nanosecond pulsed, frequency-doubled Nd-YAG laser (the one you can see in the photo), I was so sloppy to put my forearm in the beam path and catch few pulses on it. I immediately felt like I was stung by a wasp and the smell of burnt hair saturated the air. Later, for work, I have seen the footage of a chicken breast being hit by an IR pulsed kW laser: the thing drills a hole into the breast in a matter of moment, in a cloud of smoke.

Despite the difference related to the wavelength of the photons interacting with the matter, what you end up seeing is a puff of smoke and hearing a sound. In my case, whenever a used the beam trap on the beam path of the laser, or adjusted the metal slit to cut the beam, I heard like someone was whipping on the metal, and could later see cuts in the metal itself.

The smoke is the result of either the evaporated material diffusing in the air around the point of interaction, or of the plasma interacting with the surrounding. The sound comes from the resulting shockwave, so with different materials you can have a stronger or weaker sound.

If the laser in question emitted UV at a high energy, it may create a UV-emitting plasma in the beampath, which can secondarily induce photodissociation of oxygen and high temperature gas-phase reactions. Plasma channels in open air (in laser labs they fire these in argon atmosphere tubes to prevent this) are dangerous (think semi-stable linear lightning) and there was some research being done here in the US, and in Russia, and in Europe into weaponising this - you can, it turns out, control the duration of these plasma channels and use them to create and control high-voltage discharges... Laser-Induced Plasma Channel weapons.

So one possible appearance of your sorcerous laser wielders is semi-linear lightning.

Not the answer you're looking for? Browse other questions tagged science-based magic weapons lasers .

12
Space weaponry?
13
What would be different if a person has broader visual spectrum than normal
9
Ways to detect lasers from afar
26
Justifying the use of directed energy weapons
6
Are laser-stars the better missile carriers in space warfare?
7
What kinds of wounds would a laser weapon leave?
11
Is it possible to blind a spaceship/space warship?