This is something I have been wondering: if an assassin wanted to kill their target with a bullet from a sniper rifle, can they dip it in liquid mercury so even if the bullet itself doesn't kill them, the mercury poisoning will? I am looking for scientific basis on how it could be feasible, if it is at all.

And in case you're wondering: No, I'm not planning to assassinate somebody.

If we just dip the bullet in mercury, only trace amounts of mercury will remain. That definitely won't be enough mercury for our purposes.

If we treat a lead (but not iron/steel) bullet for a long time in mercury it will form an amalgam alloy. This can give us sufficient amount of mercury, but adversely affect bullet ballistics. Additionally, an amalgam alloy bullet will likely be removed by subsequent surgery, again, negating our efforts.

If we instead enclose mercury in a hollow bullet, that might work - but it would still be messy and much less effective than cyanide, for example.

Mercury has, in the real world, been used to increase the terminal effect of hollow point bullets (especially a the relatively low velocity of pistol bullets). In essence, a short time before firing (so as not to have all the mercury amalgamated with the lead, but some liquid still left at firing) a conventional hollow point is filled with mercury. It was common to press a small caliber gas check (a soft metal disk of precise diameter, with a raised edge) into the hollow point to keep the mercury in place.

On impact, the liquid in the hollow point magnified the hydraulic effect, leading to much stronger and faster expansion of the bullet. The mercury itself was chemically insignificant; it was the expansion effect that was sought. Worth noting here that my source (an article in a gun/reloading publication, but I don't recall which, much less what 1970s vintage issue) also found that the effect was essentially the same using water or oil; any difference between mercury and water being attributable to the greater increase in bullet weight.

Most who use guns for defense now consider penetration more important than expansion, so mercury tip bullets (which have long been legally prohibited as "toxic", however erroneously) are no longer widely considered an effective modification.

Not even in the form of dimethylmercury.

This extremely nasty organic compound was being carefully used by professional toxic metal researcher Karen Wetterhahn when a few small drops of it touched the outside of her latex gloves. At the time it was not known that this noxious substance could travel through latex. Nothing could be done, she died less than a year later.

To make enough stick to a (hot - >100 celsius) bullet in flight, because it would otherwise evaporate before reaching your target, dipping the bullet would not work, you'd need some water soluble delivery system which releases after impact which would not satisfy the requirements of the question - but careful how your protagonist uses it, lest they succumb the same way.

Edited due to being wrong all over.

While the answer to the question is not a hard no, there are way better options for the same effect.

If your goal is death by "heavy metal poisoning", then I'd suggest depleted uranium rounds instead. Uranium is far more toxic than mercury, plus comes with some impressive armor penetrating properties as an added bonus. DU rounds also have a tendency to liquify/vaporize on impact so even though it's solid at rest, it can still splatter on impact fatally infecting the wounded person's bloodstream, but as David pointed out, getting them to splatter against soft tissue is unlikely.

Either way, heavy metal poisoning is a slow death which is probably not what an assassin wants on a near miss. A better approach would probably be a low-caliber explosive round. While they violate all sorts of international laws and treaties, an explosive rifle round to the arm, leg, or gut would still cause enough mutilation that your target is likely to quickly bleed out and die.

If you really want to be inhuman, combine the ideas by making a sodium/potassium round with a DU jacket. If the blast does not kill you, the DU shrapnel will, and if that fails, the blast will still vaporize a lethal dose of uranium into your bloodstream overcoming the issue of getting it to vaporize when your target is not armored.

Mercury as a LD50 of between 1mg/kg to 100 mg/kg. depending on the chemical properties of the mercury you choose to use you may need up to 10g to make if potentially lethal. Assuming you use the most soluble form of mercury, you would still want to up the dose significantly to overcome elements such as splatter, bullet passing through entirely or just not absorbed by the body. This would add significantly to the weight of the bullet and may mess with its ballistics.

If you choose another element, such as polonium or plutonium, you may have better success. Both are highly toxic due to chemical toxicity and radiological toxicity. I'm not entirely sure of the chemical properties of polonium, but plutonium is a dense metal, similar to uranium. It can easily be made into a bullet that shoots properly, similar to depleted uranium. You would only need 5mg to be chemically toxic. If you have a 7.5g mixed metal plutonium round, it would ensure poisoning of the target. However, that death by heavy metal poisoning would take a long while to occur, depending on the amount of metal the body absorbed prior to the bullets removal. 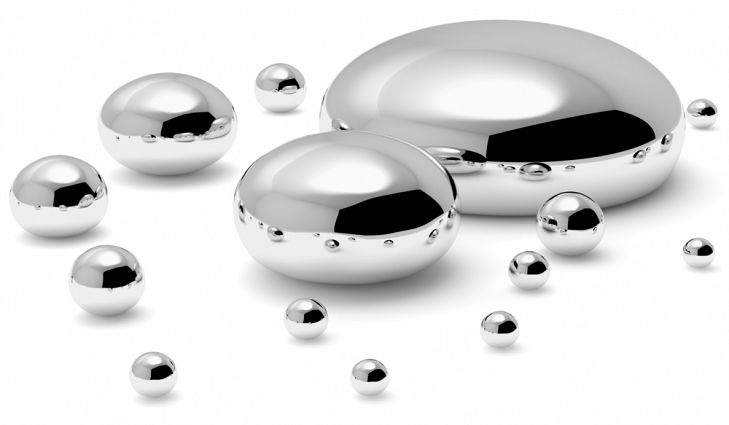 No, because you need more Mercury than the fatal dose that can be delivered in a bullet. Adding the Mercury sure will make your victim uncomfortable until the body sheds the excess amount down to acceptable levels.

Mercury when ingested targets blood, kidneys, central nervous system, liver and the brain. Large doses of Mercury will lead to easily identifiable health symptoms Administration of a chelating agent can help reduce the effects on the body.

Acute Mercury poisoning will lead to death, but generally that death will be due to an already existing kidney or liver damage. There is always the possibility that exposure will cause a failure of the central nervous system, which could lead to death.

In essence, that big new hole in the body from he gunshot wound will be far more fatal either from tissue damage or a secondary infection.

Lead is already poisonous, the addition of mercury might be unnecessary if looking to increase the poisoning potential of a bullet. Instead, I would consider using toxin from poison dart frogs in the bullets.

This toxin is highly lethal to most creatures, including humans, and was used by aboriginal tribes in the rain forest. They coated darts with this poison (likely where the frogs got their name from) and used a blowgun to inject a person with it.

You could employ a similar mechanism with your bullets, either coating them in poison or putting the poison into a specialised bullet meant for storing the liquid and releasing it upon impact. If you really wanted to use mercury though, you could fill the bullet with that instead.

As others have said mercury as a poison is just not practical. What might be possible is to use mercury embrittlement to damage vehicles.

Now I'm not sure how plausible it is to e.g. hit an aircraft with a mercury bullet, but if you can then mercury embrittlement process should allow the mercury to migrate through the aircraft aluminum structures and considerably weaken them. i.e. it might be able to make an otherwise nonlethal shot to an aircraft lethal

If you dip you bullet in mercury, it will run off. Even if some adheres (and it doesn-t - have you seen mercury?) it will be lost in the high-temperatures following firing.

Even if some does miraculously make it into the victim's body, traces of metallic mercury are not going to cause a health issue.

Suggest you pick something genuinely dangerous, eg saxatoxin or one of the others used by the CIA etc

Yes, it is possible. It took a long time, but this officer died of mercury poisoning years after he was shot.

Not the answer you're looking for? Browse other questions tagged science-based chemistry assassination or ask your own question.

8
Energy based artillery style weapons?
9
Semiliquid atmosphere - Is my premise/conclusions correct; and will it get the result I want?
6
Making a slow orbit around a large gas giant
2
Creating a steampunk-esque/cybernetic “Big Iron” revolver
9
Can biological material be magnetic?
20
How could humanoids master forge fire without using vegetal materials?
37
Managing heat dissipation in a magic wand
10
Dissipating sonic booms
3
Could an animal have more than one heart?