What would the conditions on a methane world be like? 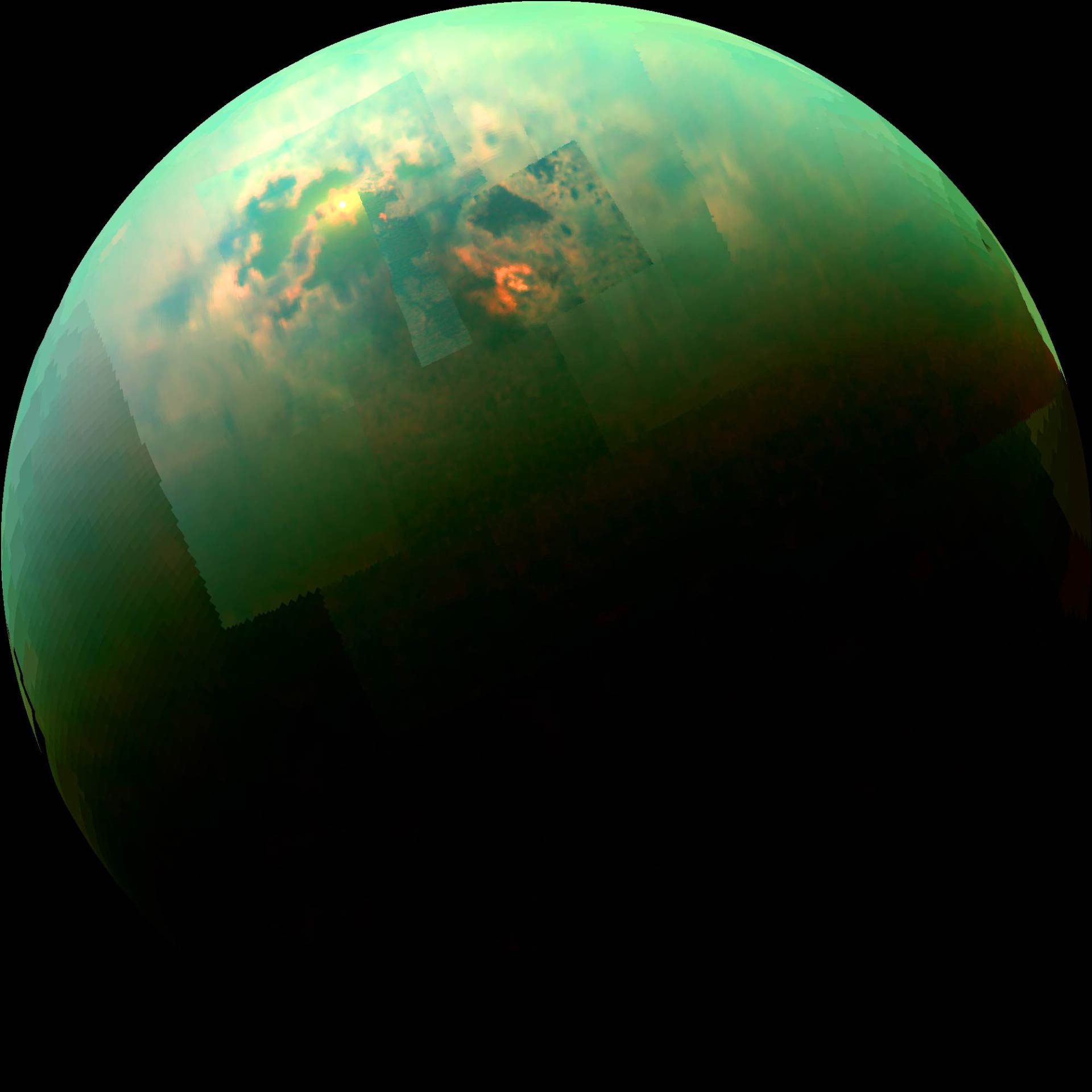 The picture above is a representation of a Methane Earth. I pulled it from this Wikipedia article on alternative solvents.

Several questions deal with whether life would be possible on a world with alternative biochemistry and the answer is a resounding yes. However very few explore what conditions for life on such a world would be like so...

What general environmental conditions would need to be met for a world where, rather than using H2O as a solvent, we use liquid CH4 commonly known as liquid methane as a solvent, to exist?

I doubt there would be much for available oxygen on a planet like this...a presence of oxygen would likely see combustion occur, leaving behind water and CO2. I'd go as far as saying that a methane planet with oxygen wouldn't be stable and would settle into a methane/co2/water mixture (assuming there was less oxygen than methane...an abundance of oxygen would see an oygen/co2/water atmosphere).

Methane isn't quite so...it requires about half the energy to raise a degree in termperature, but moreover it only requires about 1/6th the energy to change states. It's also worth noting that it is liquid at 90K (varies with pressure), so unless your planet is exceedingly cold, the methane is going to be a gas on most of the surface (oceans will be this weird mix of gas methane down until the pressure is high enough that it condenses into a liquid). If your methane world is receiving the same amount of energy from the sun as Earth is, then you'll see far more drastic temperature changes...a low of 5 degrees C and a high of 20 degrees C might very well translate to a low of 5 degrees C to a high of over 60 degrees C.

Water ice floats, which gives us ice on the surface of water...while methane liquid/ice is more dense and will sink to the bottom of the ocean. This will give the bottoms of the ocean a very cold and most likely lifeless nature (I'm not too sure if life can survive in -100C temperatures stuck in solid methane). This means that the process of ice metling to keep the globes temperature moderated does not exist on the methane world, potentially making the 60 degree estimate above a little too low.

Weather in a nut shell can be called the redistribution of energy in an unevenly distributed environment. More extreme temperature differences will spawn more extreme wind conditions, I would not be surprised if this is a very windy world.

I suspect you'd get a form of 'rain', but very little if at all would ever reach the ground. Methane in the upper atmosphere would cool to the point of condensing and forming droplets of methane that would fall towards the ground. However the act of falling would evaporate it and it would be highly unlikely that the 'rain' would ever reach the surface.

I also think the pressures will be significantly different...methane isn't as dense as our nitrogen heavy atmosphere and the pressures wouldn't be the same for the same volume of atmosphere...however pressure is mass related and if the atmospheres masses were the same, there'd be little difference here. I'm not quite sure if a planet would be able to retain it's methane or if it'd slowly leach into space though.

Geologically speaking...in cold portions of the world (very cold) you could potentially see methane rivers and lakes form that would carve out river valleys and show signs of erosion via rain...but for the most case, the land is going to be defined by wind patterns and wind erosion. I'd expect significant amounts of dust to be in the air which, when combined with high wind speeds, will have an abrasive effect on rocks and the land in general.

A volcano eruption might be an interesting thing...if there was any oxygen content in the land beneath, it could cause an eruption to ignite the atmosphere and burn until all the oxygen spewed forth in the volcanic event is consumed.

You'd have some interesting snow around, like radon and xenon.

Fire would be very bad, because liquid methane is warmer than liquid oxygen, so any fire would instantly boil then ignite the methane...