In my story a new device has been developed which will replace clunky headsets and haptic suits. This new device is surgically implanted in the users’ bodies and allow them to interface directly with the virtual reality game.

All motor signals from the brain are intercepted and redirected to the game and all sensory input is fed from the game directly through the interface.

Where in the body will this interface need to be implanted? Ideally it would be in the user’s arm however I’m expecting that more direct access will be required. Is it more likely to be implanted in the spine or would this be an implant directly into the brain itself?

It would need to be implanted into the brain stem. The brain stem is the "device" that controls all of the messages between the brain and the rest of the body. It also controls basic functions like breathing. So you would simply cut part of the line, re-route it through the device and bam. You might not even have to cut the signal you could just hijack it temporarily.

this loop where the Sensor is actually multiple sensors, 5 to be exact (taste, touch, etc..). The Controller is the brain stem and brain communication system and the System is us. Obviously, this is an oversimplification of a model but its close enough for the purpose of demonstration of my idea.

The incision could be made just behind the anus. 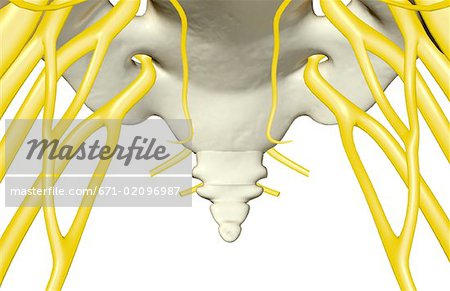 Those last four nerve bundles at the base of the spine which serve only to cause pain when someone falls on their "tail" are to me the obvious candidate. An advantage would be it involves no obvious scars or intrusion into the head in order to implant it.

If done well, it might feel like no more than the aftermath of a smacked bottom whilst it healed.

Their combined size would be at least equivalent to the nerve density of an eye, if exploited and trained from an early age it should provide a rich synesthetic point of data exchange.

Directly over the motor cortex.

You would need two: for right and left. They would be directly over the brain. This is how Omayya reservoirs are placed. 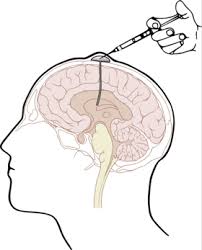 This would work because the sensory apparatus for detecting motor signals (your implant) is right above the origin of those signals. Also you could have a long antenna hanging thru the brain and into the ventricle, as the catheter on the Omayya does. Also it is safe because it has been done this way for decades.

This offers narrative possibility. The manufacturers of this device assert that the motor signals are at their purest emanating from the brain, unmodified by inhibitory neurons and other neural overlays. It proves to be true. The motor signals coming from the brain have a lot more information than what is actually used by a finger or an arm. But what is this additional information? What besides the finger is the brain talking to?

Surgery is high enough risk for even healthy individuals when involving complete general anesthesia, and even more so with brain stem surgery - why not look at all the research being done on HMIs using nerve induction?

You'd probably end up with a collar-like device - sits atop your shoulders and partially around your neck & collarbones (like an ancient Eypgtian pectoral necklace) but which either doesn't require any penetrations or which makes low-impact micro-penetrations similar to acupuncture or EMG (electromyography - nerve conduction test) needles.

Having both been under a lot of GA's for surgeries, and having been through repeated EMG studies, as much as I dislike needles, you'd have to talk very persuasively to get me to volunteer for a GA surgery with brainstem implications for gaming.

Reference: Human-machine interfaces based on EMG and EEG applied to robotic systems - NIH

You can have the IO port where you want. It should be a separate device connected to an internal data network that links it to the rest of the system.

There is no single location in the brain that can handle everything necessary for the system, so you'll need multiple modules linked by a network anyway. So there is no extra cost for making the IO port a separate module located at a convenient point really.

Also a modular network architecture would probably be preferred anyway. Number of small and relatively simple devices is generally more robust and reliable than one device that does it all.

It is also extensible. You mention VR but you'd probably also won't a lower bandwidth wireless connection so that you can watch cat videos on YouTube and do the other things you do with your smart-phone.

Body Area Network is probably a concept you want to be familiar with.

The visual nerves go from the eyes through some 3D processing and basic analysis all around the brain, and merges with the rest of the brain far in the back. The nerves responsible for smell (olfactory) take a more direct route into the middle of the brain. The taste nerves are probably somewhere near. Hearing goes from the sides into different parts of the brains. The stem is the part where our actions all go through - with the exception of a few reflexes and such. Which unluckily you also need for realistic vr, if you want to include foot movements or eye lids and such.

An area where we could get similar results more easily is our consciousness, especially the parts with which we dream. If we could attach to that, we'd just need to create according illusions. It's probably around the parts of the brain which connect the two halves. So I'd put the device between the two halves of the brain, measuring mostly what is exchanged between them. But it's also central enough to attach to other important parts, like the visual nerves, olfactory nerves, and so on.

The most likely place to put it, like Rob mentions, is in the brain stem. Depending how the device works, however, another location (like an arm) is possible. Namely, a device implanted in the arm which sends nanobots throughout the bloodstream could have better interactions for sensory input in arms, eyes, etc, and nanobots in the brain stem to stop motor function.

In other words, an implant which acts as a controller for nanobots could be implanted outside the brain, but release the nanobots throughout the body.

Beneath the scalp with leads to the occipital cortex for vision, the motor cortex and cerebellum for motion and coordination, and the auditory cortex for hearing.

Not the answer you're looking for? Browse other questions tagged virtual-reality cybernetics or ask your own question.