Car headlights in a world without electricity

In a world like ours in the 1980s, but which for whatever reason does not use any form of electricity. (Either it does not exist or batteries and generators etc have not been invented.) For purposes of the question, diesel engines can be assumed (so no need for electric spark plugs or a replacement).

How would people construct a car headlight without electricity? Is this plausible to do or would using cars at night just be dark and dangerous?

Back in the day before portable electric lights, carbide lamps were used: A mechanism dripped water onto carbide, which then gave off acetylene gas, which burned in a controlled fashion. This was used for headlights on cars and bicycles and for miners' lamps, even for lighthouse lamps. Hence, this is an obvious answer to your question. 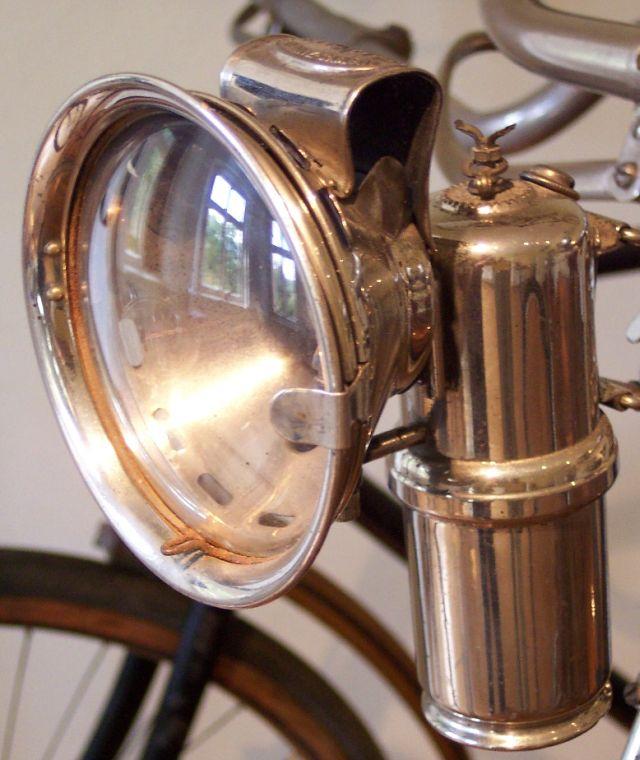 Another option is to use magnesium flares, which among other things are used for underwater lighting.

Magnesium can be produced non-electrically by the Pidgeon process, a batch process in which finely powdered calcined dolomite and ferrosilicon are mixed, briquetted, and charged in retorts made of nickel-chrome-steel alloy. The hot reaction zone portion of the retort can be gas fired or coal fired

The obvious retro answer would be to use carbide lamps which work by dripping water onto a chamber of calcium carbide producing acetylene as was used on the original versions of the Model T Ford: 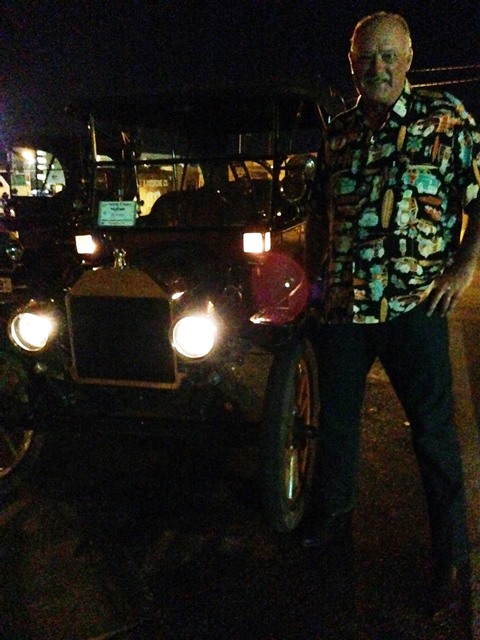 However, since the Calcium Carbide is made using an electric arc furnace, there may be no economically viable way to mass produce it in your world, so it might become the exclusive province of the rich.

Slaked lime (Calcium Hydroxide Ca(OH)2) Could be used to produce limelight. An Oxygen-Hydrogen flame is directed at a cylinder of the lime bringing it to a temperature of 4,662 °F (2,572 °C).

Part of the light output is black body radiation (incandescence), but part is candoluminescence giving off more light than otherwise in the green part of the spectrum. 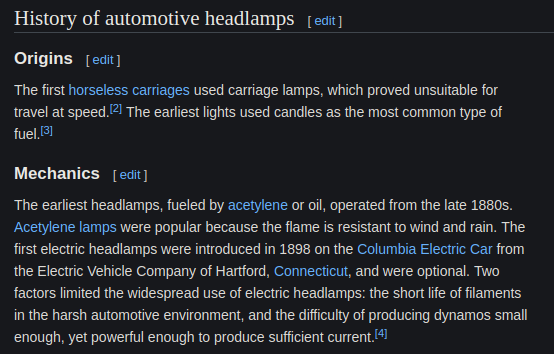 Since you're talking about diesel engines, you could also use diesel as lamp fuel.

It doesn't burn particularly cleanly and in cold weather it will need to be preheated to work, so far from perfect but it does save you from using multiple different fuels for different parts of the vehicle.

Other options include oil, gas, and alcohol. Just about anything that will burn can be used for lighting, it's merely a matter of lamp design. In some cases you'll need to pressurise your fuel, you'll need a suitable mantle, and an ignition system (like a chauffeur).

The car could be powered by a Diesel engine that gets started similar to a Lanz Bulldog. (pre-heat with a fire (wood fire, gas burner, coal, ...), then hand-crank). There are Youtube videos about the process.

The headlight could be Petromax type burners (they can run on Diesel just fine). Just use the basic Petromax construction, then add a reflector to direct the light.

That type of headlight might have trouble getting road-legal in Germany because... too bright!

Are you fixed on having headlights on the vehicle?

We don't require headlights during the day because its not dark. So give your world 24 hour sunlight or the equivalent. That would be another reason for not needing electricity for other purposes.

Or consider having roads well-lit by fixed illumination, like gas lamps with fixed piping supplies, or lots of menial workers whose job is to light the lights at dusk.

Or alter the physiology of the eyes of your characters so they have more Rods and fewer Cones, and can therefore see better in the dark like a cat or dog. Downside of this is a reduction in colour perception. A large moon orbiting directly opposite the sun would provide some base level of illumination all night long.

In a world without electricity, artificial lighting is going to be pretty lousy. Downtown areas will have gas lighting, but outside that core, there will be miles and miles of ordinary residential/light business districts that don't rate gaslights, but still don't want cars tearing through their neighborhoods at 30 mph in the dark.

And while headlights are achievable (though not all that great), taillights present a much harder problem. A light that small will be difficult, especially when it also needs to be more reliable than a headlight - you notice when a headlight goes out. So taillights may be impracticable, and cars would be pitch black aft.

Between the risk of overrunning an unmarked car ahead, and hitting pedestrians, "overdriving your headlights" would be serious business. Governments would impose draconian nighttime speed limits with stiff consequences for night speeding. So driving at night would be deathly slow, to the point of not being worth doing, except to "limp home" at a dreadful pace after an unexpected delay.

This would happen early in the evolution of automobiles, and stick.

Obviously, over the decades things would improve; roads would get better, those outer-urban and suburban neighborhoods would get gas lighting on their major trunk routes (e.g. In your town, all the numbered routes), and limited-access freeways would be built with more liberal nighttime speeds due to absolute prohibition of pedestrians. But that would only help after you get to the freeway. Until then, you're still plotzing along at 10-15 mph on the neighborhood and feeder routes that are 30-45 mph by day. It would be just too tedious. Nobody would have the nerves for it.

Except of course for commercial interests; trucks and buses, which are expensive machines with the best lighting money can buy, would own the night.

Trains and streetcars would also be tip-top. Even in our world, trains always had the best headlights available. In fact, this "ability to move at night" would slow the decline of rail transit. Fair chance the Interurbans are still around, providing swift travel on their limited-access right-of-ways (with a hiking-biking trail alongside to remove the temptation to walk down the tracks). If you were trapped downtown after dark, just as likely you'd leave your car downtown and take the interurban home. No electricity, yes; but the streetcars and interurbans would happen a bit later and have diesels.

For something a bit more fantastical than chemical lamps: how about some fireflies or similar bio-luminescent life forms trapped in the headlights and forced to glow?

Not the answer you're looking for? Browse other questions tagged hard-science electricity light vehicles .