I am considering the possibility of having massive cephalopods evolving on my world and having them fill the niche of whales.

I've heard about how whales have evolved to increase in size for the purpose of obtaining more food. I've also read about the giant and colossal squid, so it doesn't seem too outlandish for a squid to evolve to the size of whales. The reason why whales can grow to such ridiculous sizes is that they don't have to support their own weight.

For locomotion, I'm thinking of elongating their mantles to allow them to swim in the same manner as whales.

As for feeding, I'm considering two main ideas. They are able to repurpose their siphon to take in water, and then keep some sort of baleen like mechanism that filters out krill, small fish, or whatever else is small and form schools on my world. My other idea is that they have webbed arms that close onto food and guide it into their beaks, which have been redesigned as a mechanism to trap large amounts of prey.

They play an important role in the ecosystem, similar to that of whales, but more stable. They reproduce faster and are more fertile when young. Instead of birthing single helpless calves, the create long chains of eggs. Whaling would be more sustainable on these creatures. They are fed upon by sharks and other smaller predators, as well as larger sea monsters. Their ability to consume smaller creatures lower on the food chain makes them more numerous and thus a more sustainable source of food.

Does anything about this sound implausible? Let me know.

https://www.livescience.com/54870-giant-squid-may-be-school-bus-size.html suggests that existing giant squid could reach 20 meters in length. Given a lack of whales and the biological variations you've listed it seems entirely plausible for squid to reach the sizes you describe.

I've heard about how whales have evolved to increase in size for the purpose of obtaining more food.

Well, partially, but it's also for thermoregulatory purposes, and for defense against now-extinct "megatooth sharks" like the various Carcharocles species, Isurus hastalis and Hemipristis serra.

I've also read about the giant and colossal squid, so it doesn't seem too outlandish for a squid to evolve to the size of whales.

No, not all. Although it should be noted, there would still have to be some significant increase in size, as squids are not very dense for their length. For comparison, a giant squid can be as long as a humpback whale, but the largest recorded individual was a hundredth of a humpback's mass.

For locomotion, I'm thinking of elongating their mantles to allow them to swim in the same manner as whales.

This I find unlikely. Modern cephalopods move using jet propulsion, sucking water in and expulsing it backwards through their siphons. Meanwhile, cetaceans move by undulating their spine up and down (because of their mammalian vertebrae - consider that mosasaurs and icthyosaurs had tail paddles which beat from side to side).

These are very, very different methods of locomotion, and the latter is very difficult without a flexible spine (a gladius wouldn't cut it). I'd advise you just have them use jet propulsion, perhaps beating their wings for extra boost.

As for feeding, I'm considering two main ideas. They are able to repurpose their siphon to take in water, and then keep some sort of baleen like mechanism that filters out krill, small fish, or whatever else is small and form schools on my world.

This sounds a lot like the "baleen squids" of the Speculative Dinosaur Project. These animals (one of the greatest creative triumphs of the project) have two modified tentacles ending in a feather duster-like cluster of filaments which they use for filter-feeding.

I would recommend a filter-feeding lifestyle over your other idea. However, rather than copying the idea from the baleen squids, you should probably put your own spin on it. My suggestion is that they use their gills as baleen; if you look at a squid gill on an anatomy diagram, you could see how it could be repurposed as a filtering organ. This would also be consistent with your siphoning-in idea.

They play an important role in the ecosystem, similar to that of whales, but more stable. They reproduce faster and are more fertile when young. Instead of birthing single helpless calves, the create long chains of eggs.

Sounds good. William J. Sanders actually linked the large brood size of sauropods to their large size; the more offspring you can have, the higher the reproductive rate. a high reproductive rate means that there's a reduced extinction risk, and thus an opportunity to grow large.

(Also, the more offspring you have, the smaller they will likely be - in other words, the more different they'll look from the adult form. This means that they'll probably undergo an ontogenetic niche shift, where the young occupy a different niche to the adults. This also reduces the risk of extinction.)

Does anything about this sound implausible? Let me know.

Except for the locomotion bit, it all checks out. Welcome to WB.SE, by the way.

I was pondering giant molluscan filter feeders in the context of the giant nudibranch I proposed for this question.

Your giant creature is a cephalopod filter feeder, but not a squid or octopus.

It is a giant vampire squid. 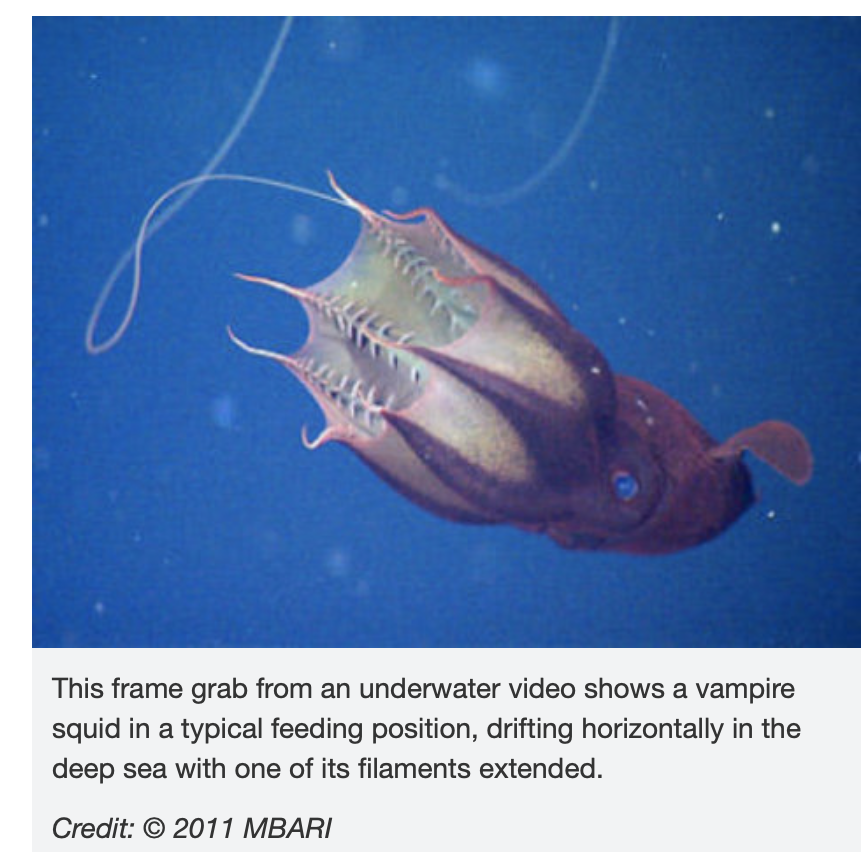 Hoving soon found that if he placed bits and pieces of microscopic animals into a tank with a vampire squid, the food particles would stick to one of the string-like filaments that the animal sometimes extends outward from its body. The vampire squid would then draw the filament through its arms, removing the particles from the filament and enveloping them in mucus. Finally, the squid would transfer the glob of mucus and particles to its mouth and consume it.

So cool. These things live in the abyss. There is no reason they could not get huge because they live a low energy lifestyle. Maybe they do. They have long filaments which capture plankton and detritus and that is what they eat.

I could imagine something like this in an Ordovician world. Probably the jellyfish had been living in essentially this same way for eons but the giant Vampire Squid outdoes the jellyfish at their game, its molluscan body plan allowing larger size than a jelly could accomplish. Its feeding tentacles would be great for pulling in jellyfish as well as the rich broth of those ancient seas.

I see nothing inherently wrong with this idea. In the absence of whales and other sea mammals something would fill the niche. Prior to mammals there were very similar reptiles, so why not squid.

seems to indicate that larger ancestors to squid may have lived in the past:

"The other fossil beak sat in the mouth of an even larger cephalopod. Named Haboroteuthis poseidon by the researchers, the creature was a Cretaceous member of the lineage that contains modern squid. And from its jaw size, it was quite an impressive invertebrate.

Measuring a ridge that runs up the front of squid beaks, Tanabe and coworkers found that Haboroteuthis had a “crest length” of about 2.4 inches. A 25-foot-long giant squid caught off New Zealand, by contrast, had a crest length of only 1.8 inches, and a Humbolt squid with a mantle length of almost five feet had a crest length of 1.9 inches. Haboroteuthis was at least comparable to these modern heavyweights. We may never know for sure exactly how large Haboroteuthis was, but, if its jaw is anything to go by, it was as big as some of today’s undersea giants."

Not the answer you're looking for? Browse other questions tagged reality-check creature-design anatomy sea-creatures or ask your own question.

11
Mermaids on Land?
46
How expressive is a color-based language?
37
Plausibility of Floating Whales
6
Genetic modifications for the ultimate office drone?
9
Designing a somewhat realistic “Astomi”: Filter-Feeding Humanoids?
6
Eating one whale every three thousand days?
4
Could penguins evolve to have fingers?
3
Teeth that grow proportionately to your size