How to have a robotic whip move effectively?

I recently read The Prefect (now named Aurora Rising) by Alistair Reynolds. The book is about a police force protecting a belt of space stations. The local democratic regime has mostly disarmed the police force, the only weapons available to them on normal duty are so called "Whip Hounds". A Whip Hound is a smart, autonomous whip, behaving like a snake. I was wondering if something like could be build with modern or realistic, already on the horizon future technology.

The Whip Hound should:

The cover-art of Elysium Fire: 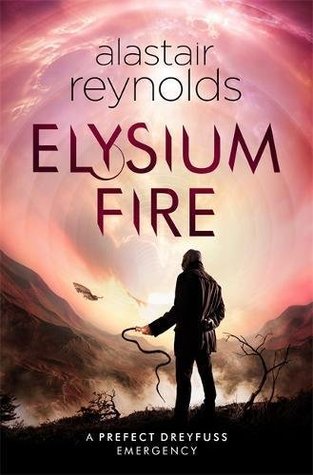 This shows a character holding a Whip Hound. Suggestions mustn't be an exact match to that design, but something close to it. Any issues arising from considerations about the software steering and coordinating or the energy source powering the thing are to be handwaved.

Thanks for the answers guys and gals.

As you are asking for current/on the horizon tech, i think Snake-like movement in a 3cm wide, minimum 1.5m long object is out (btw: snakes of that length are a lot thicker as well - it's all about the leverage)- but i don't think self propelled movement is out. If the handle houses some excentric rotary motors and a rectraction mechanism, and the whip itself is passive in the sense of 'only' (this will already be a tall order, but compared to full snakelike motility) being able to adjust it's own local flexibility, then it should be possible to propel itself using a sort of one-legged Jesus-lizard approach: Whip the cord left and right and let the impulse do the rest. The key to different gaits and speeds is the variable flexibility of the cord: the excentric rotaries in the handle will basically induce wave patterns into the cord, which has to be able to mimick, in fast succession, the properties of a slack cord and a stiff wire.

Think about a real whip: it tapers to the tip (and sometime employs a different material there) because you'll induce a transverse wave at the handle, at human-hand-speeds, which will translate to a supersonic snap of the tip - all thanks to the different properties of the cord along it's length. This, you'll have to mimick, but with rotary motion instead of lateral, because that is far more believable from current tech.

The handle will 'hover' at some height, while the cord spins all around , like some kind of flagellum.

'Sword mode' will be more like 'rapier mode', at best, the cord being retraced to rapier-length, and then stiffened to the max. The problem being that in a true rapier, the blade is one continuous piece of metal, while with horizon-tech it will be a chain of macroscopic elements that somehow can tune their link-to-link friction. Think of trying to stab someone with a glued-stiff bicycle chain (sharpened and pointed) - As soon as there is any kind of bend, (because you hit the sternum, for instance) the forces in the chain linkages will go off the scale, and the 'chain-rapier' will appear to break at one point.

But, you only specified 'lethal wounds', not 'lethal stabbing wounds', so let's assume that the weapons-mode of the whip hound is more whip related than sword related: have some razor edges on the whip. You can swing the whip towards the victim like a normal whip, and the rotraries in conjunction with the smart-cord will have it coil around an appendage or the neck, tight, and either sharp side in, or sharp side out. Now, with a normal cord, you'd not have much damage-opportunities: with a stiffness-controlled cord though, any tug can be directly translated to sawing action - with what would be essentially razor wire this is definitely lethal at the neck.

About the energy and the volume, though: Prefects have some sort of antimatter-handwavy bottomless energy budget at their disposal - this is not horizon tech. Your grip max requirements (if i understand them correctly) are about 15 cm long and 3cm thick, for the retracted whip hound, giving us a volume of about 100 cm³ (0.1 l). That is not much. A bicyle chain (an i frankly do not see anything thinner to be even remotely able to contain the tech necessary for the flex-changing) has about 100 cm³/m, so we meet a stumbling block right there, but let's suppose the chain is half as wide as a bicycle chain, giving it 50 cm³ for 2 m chain... we now have only 50 cm³ left, and need to stuff computers, motors and a battery in there. Best current li-Ion will give you 500 Wh per litre, so let's double that (horizon stuff) - We now have 50Wh as the upper limit for energy (We could go higher with H2, but your whip hound will need high peak power, not long endurance, so it think some LiIon decendant fits the bill best). Realistically though, at least half of the remaining volume needs to be motors, so 25Wh - this is what better cordless drills bring, so we are not entirely lost.

Btw: I do not necessarily envision a 'chain', i.e. repetitive, short macroscopic elements. It might as well be some sort of steel-weave cord, etc. The crux is being able to control stiffness, not only only globally, but locally. Whether this is done my micro-actuators in the individual chain links, or by some property of the weave (see stents for some really nifty weaves) reacting to individual strands being manipulated, i don't know.

And especially this one:

From which one could logically extrapolate a huge range of potential ways of addressing the function you've described: pneumatics formed from high strength carbon-nanotubules with integrated titanium edges, which when overlapped can form semi-or-fully-rigid blades, when in loose sequence can form free-motion curling appendages with lifting power and wide range of motion, when in tighter sequence can form a snappable whip-blade and so on.

Basically, if the motion you're describing is ANYthing like an octopus' tentacles, the fluid-filled robot is probably the right developmental direction into which to look.

Really your robot whip is a snakebot.

There are lots of different kinds. Wikipedia lists many and youtube is full of them. But wikipedia claims that shocking snakebots can be used by animal control personnel and I could not find any video of that, so we will use the text from howstuffworks.

The main body of a snakebot consists of about 30, identical, hinge-like modules that are linked together in a chain. These modules are connected by a central spine and work together to perform various functions... Here's a closer look at a snakebot's architecture and individual modules...

Electronics - Each snakebot will have a central computer, possibly located in the snakebot's head, that works in conjunction with smaller computers in each module. Wires will connect each module to its neighboring modules, creating a network of modules that work together as a unit. The wiring will also carry communications and power to and from the computer brain.

I think the whip hound could do a lot better than have a box cutter on its snoot. Youtube has laser snakebots. And the aforementioned apocryphal taser snake would be better for subduing people.

The brain would be in the handle. The whip hound could pull its segments together or extend them. Possibly it could firm up its outer integument if your were going to use it like a billy club. It could definitely go do stuff on its own like these snakebots do. Agility is all about the speed of the motors animating the segments which you can make as fast as you like.

Not the answer you're looking for? Browse other questions tagged reality-check technology weapons materials or ask your own question.

8
Sword that is limp when in sheath, and hard when drawn?

15
How fast would one have to move to climb up falling debris?
4
How could we use Starlite in warfare?
20
Can a robotic army really defeat humanity?
45
Is the whip sword feasible?
5
How do I cheaply move things into space?
9
How effective would a sword connected to the user's wrist by a whip be?
14
Whip it like Indy
5
Can a Robotic Eyeball Be Created that Perfectly Replicates Human Vision?
6
How to make a dragon's whip even deadlier?