Would a monster size aquatic lizard be possible?

So, I am writing a comic which will perhaps grow into an entire series about a group of aquatic heroes. One of those heroes is a monster size aquatic lizard. The story of how this lizard came about is complicated and is addressed in the comic but for simplicity's sake here, it was a lab error. Scientists were breeding lizards to try to figure out some genetic mysteries and it lead to there being a clutch of about 10 eggs that would develop into monster sized aquatic lizards.

This accidentally hatched lizard hybrid is now out in the wild and is colloquially referred to as "The Komodo of the Sea". Now in this alternate universe, the existence of this monster lizard is not leading to species extinction.

Now, I will ask in future questions about the specific features of this monster lizard and its habitat and life cycle, but for now I will be asking about the size of it. I already mentioned that it is The Komodo of the Sea. This already gives a clue about the size. It is at least as big as a Komodo Dragon. 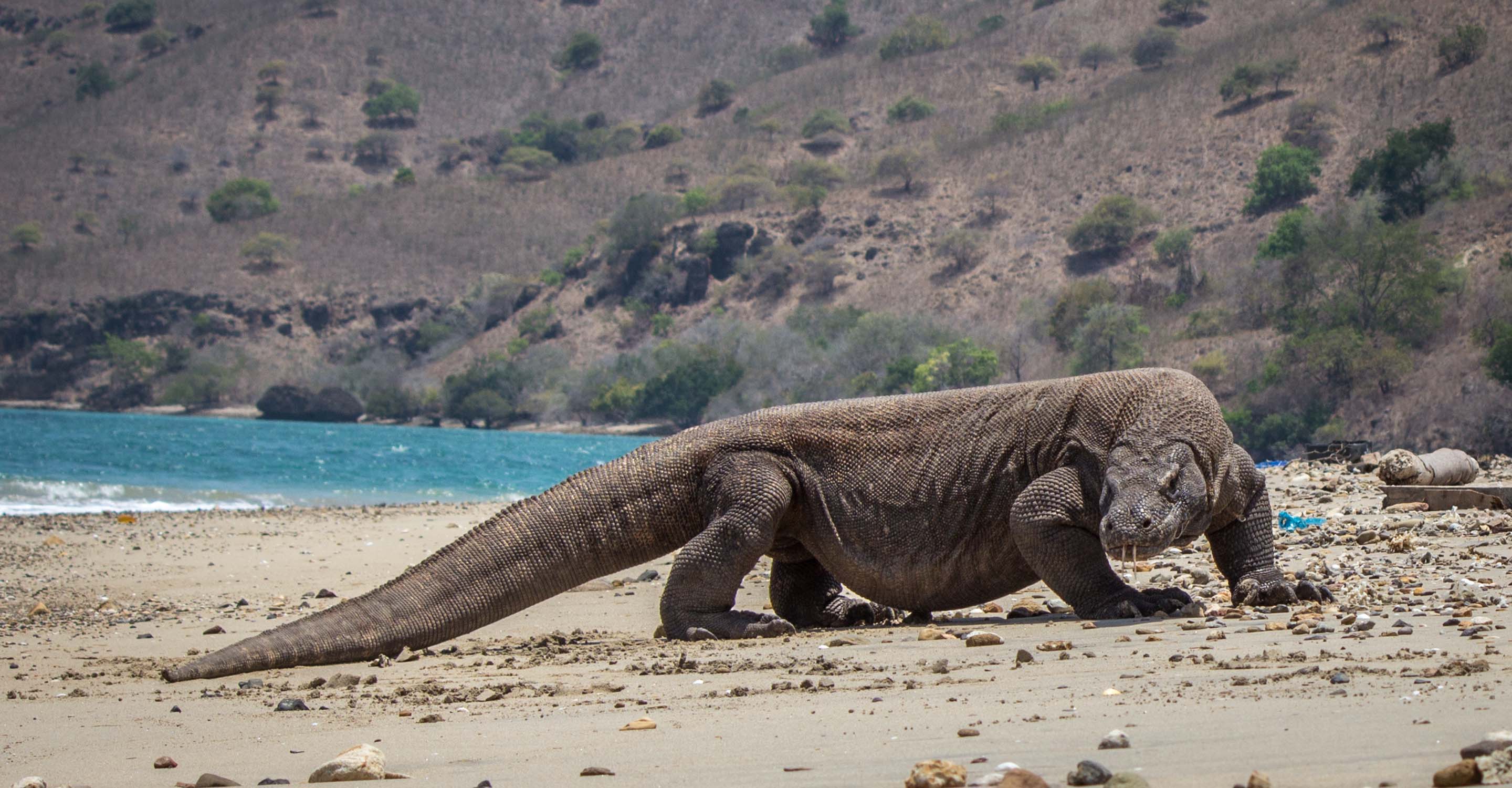 Now that is a giant lizard. It weighs about twice as much as an average human and is about twice as long as well. Prehistorically, there was a relative of this giant lizard known as Megalania. It was about twice as long as a Komodo dragon and more than 3 times heavier. So there is no doubt that a monster size lizard could exist. And, given that this monster of a lizard is aquatic, it wouldn't be surprising if it could grow bigger than Megalania. No bigger than a blue whale obviously because at that size, if it gets bigger, it will likely collapse and not be able to breathe.

Sure, hollow bones would ease that weight but they are fragile and not ideal for an aquatic animal. In fact, I do believe the water pressure would cause the bones to become more dense. And I know that bone density contributes a significant amount to weight when you are talking about giant animals.

Is it possible that this aquatic lizard could grow up to 50 feet long, as long as a humpback whale given the inverse cube law and that the lizard is aquatic? How massive would it get at that length?

Nature did it first. 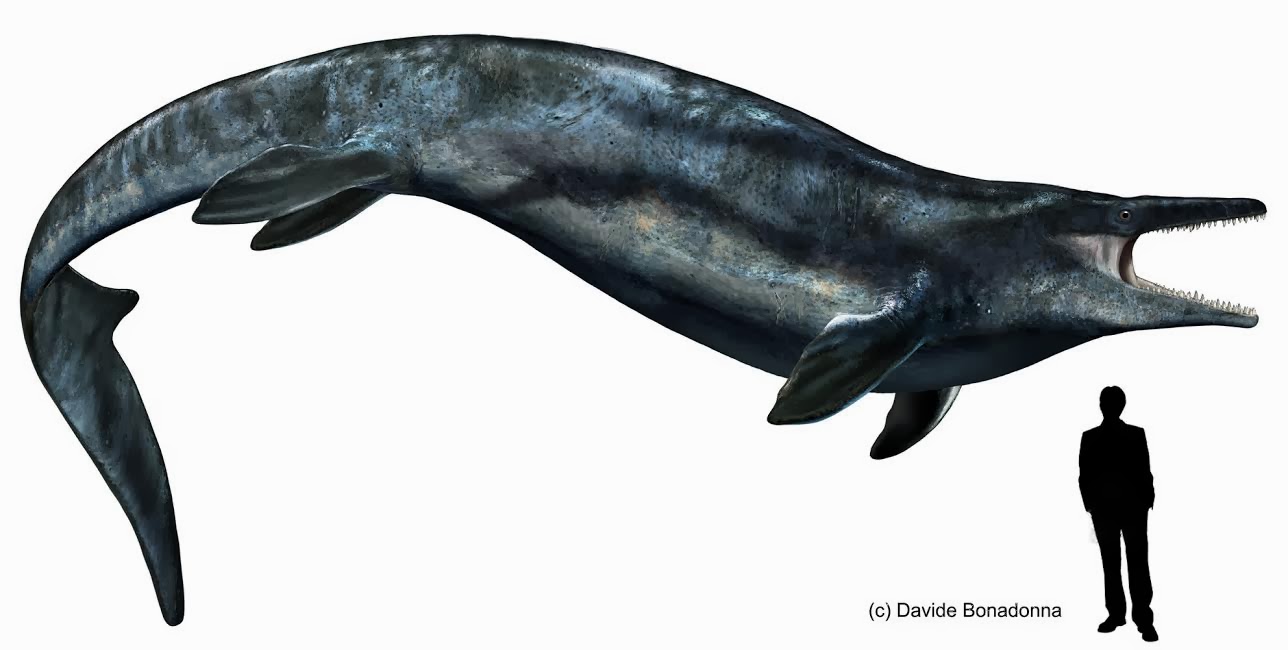 Mosasaurs were fully aquatic lizards, most closely related to modern monitors (such as the Komodo dragon), which swam Earth's seas for much of the Cretaceous period.

These were well-adapted to ocean life. They evolved viviparity so they didn't have to return to shore to lay eggs, and were likely warm-blooded to cope with the chilly ocean temperatures.

Lastly, the giant size. The largest mosasaur, Mosasaurus hoffmanii, was a whopping 17 metres long, a good five feet over the length you describe. So there you have it.

EDIT: As John pointed out, no hollow bones are needed. Floating to the top is as much a problem for aquatic animals as is sinking to the bottom, so mosasaurs made do with high lung capacity, and also (possibly) a sort of blubber.

Australia (and maybe other areas below Wallace's line?) had a monitor lizard that was bigger than the Komodo dragon - Megalania.

Those are big! Supposedly their time overlapped with the first humans in Australia. Also probably Homo Floresienis rode them around. Hyah!

In his book In the Wake of the Sea Serpents, Heuvelmans makes reference to "reports out of New Guinea" of 20 foot long aquatic monitor lizards. Maybe some Megalania escaped extermination by hiding out on remote islands - oh, yeah; those are Komodo dragons. A giant water monitor could happen, and the water is a good place is hide from humans. I would put it in New Guinea if it were anywhere.

A giant water monitor begins to converge on the mosasaurs: seagoing lizards. A totally legitimate body plan and lifestyle.

Pliosaurs were the largest marine reptiles (by mass). Not quite blue whale sized but surprisingly close. Pliosaurus macromerus is estimated to be around 15 meters (49ft) and Pliosaurus funkei is estimated around 16 meters (52 ft). Larger pliosaurs may even exist, below is an image of the largest estimates. Mass estimates vary by quite a lot, 35-45 tons is a good range however. Longer marine reptiles (plesiosaurs) exist but most of that length is neck.

Note weight is not an issue in marine animals they want dense bones, hollow bones would be a huge disadvantage, most marine tetrapods with lungs develop super dense bones to ADD weight, they need ballast to compensate for the buoyancy generated by the air filled lungs. Everything from pliosaurs, to whales, to penguins have solid bones that are far denser than their terrestrial relatives. 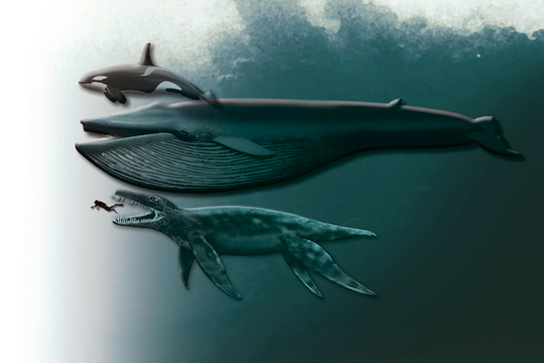 As long as it stays in the water the cube/square issues that limit the practical size of a giant creature don't really apply. Really the practical limitation is the difficulty in catching enough prey to feed such a large creature. Which is why the largest sea animal has to rely on straining vast amounts of seawater just to keep itself fed. But it will be very problematic if your monster ever tries to leave the water.

Not the answer you're looking for? Browse other questions tagged hard-science fauna ocean reptiles or ask your own question.

5
Regenerating Skeletal Lizards
4
Dragon development
1
Intelligence development: Plausible?
4
Aquatic lizard: Is being warm blooded essential?
2
Mega fauna and flora on a super earth
3
Is it possible for a reptile to be amphibious?
13
How would dragons mate, according to science?
6
Lizardmen, gigantothermy, and the energy demand of resting muscles. Could it work out?