What is the optimal sleep scheduling strategies for a 24h sleep cycle on a 48h day planet?

I have a planet with days that is exactly two times longer than in real world. I'm trying to find out the best time to sleep if people still need as much sleep as they do even if they are on a planet where days last 48 hours. Although people in this planet have lived here since the beginning, all the rules and the people's biology in the real world still applies except for the length of the days. Basically just multiply our own day-night cycle by two.

I thought maybe they can sleep around mid day and mid night. 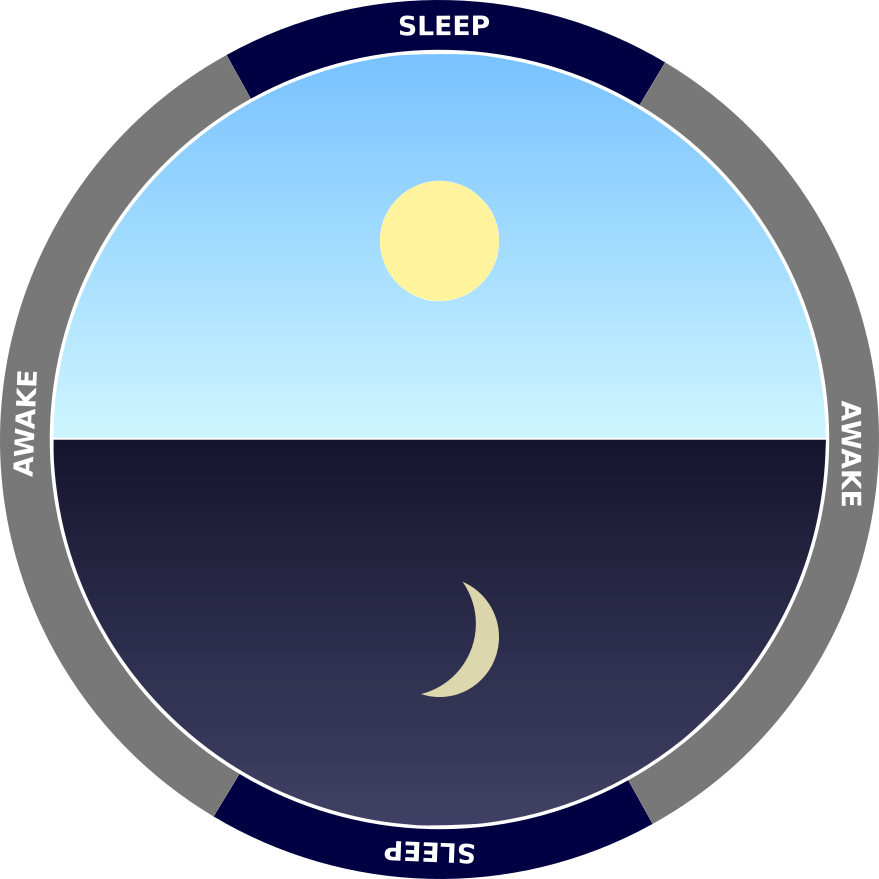 My reasoning for this is that for every session that they are awake, at least they can see some daylight. One disadvantage of this is that they would have to sleep for a full 8 hours while the sun is out, which is bright and might be hot.

So is finding the optimal sleep schedule just about determining if sleeping in daylight is better than being awake in the darkness or vice versa?

The idea that humans are awake during the day and have one long sleep session of approximately 8 hours in the night time is a very modern concept.

The siesta system is phasing out but still common, especially in locations where the sun midday is strong enough, or the air hot enough, that you can't get much work done anyway. In this system you nap at midday then have one long stretch of sleep at night. Your total sleep per day is about the same.

A siesta is a short nap taken in the early afternoon, often after the midday meal. Such a period of sleep is a common tradition in some countries, particularly those where the weather is warm. The siesta is historically common throughout the Mediterranean and Southern Europe. It is the traditional daytime sleep of Spain and, through Spanish influence, the Philippines, and many Hispanic American countries.

Factors explaining the geographical distribution of the modern siesta are high temperatures and heavy intake of food at the midday meal. Combined, these two factors contribute to the feeling of post-lunch drowsiness. In many countries that practice the siesta, the heat can be unbearable in the early afternoon, making a midday break at home welcome. (ref)

Even with a nap during the day, we're still talking about a single stretch of sleep at night. And that's not how humans traditionally sleep. Bi-model sleeping was the norm in our past, and still is for some cultures.

While nighttime awakenings are distressing for most sufferers, there is some evidence from our recent past that suggests this period of wakefulness occurring between two separate sleep periods was the norm. Throughout history, there have been numerous accounts of segmented sleep, from medical texts, to court records and diaries, and even in African and South American tribes, with a common reference to "first" and "second" sleep.

Anthropologists have found evidence that during preindustrial Europe, bi-modal sleeping was considered the norm. Sleep onset was determined not by a set bedtime, but by whether there were things to do...households at this time retired a couple of hours after dusk, woke a few hours later for one to two hours, and then had a second sleep until dawn. During this waking period, people would relax, ponder their dreams, or have sex. Some would engage in activities like sewing, chopping wood, or reading, relying on the light of the moon or oil lamps.

…The first and second sleep started to disappear during the late 17th century. This is thought to have started in the upper classes in Northern Europe and filtered down to the rest of Western society over the next 200 years. Interestingly, the appearance of sleep maintenance insomnia in the literature in the late 19th century coincides with the period where accounts of split sleep start to disappear. Thus, modern society may place unnecessary pressure on individuals that they must obtain a night of continuous consolidated sleep every night, adding to the anxiety about sleep and perpetuating the problem. (ref)

Studies show that humans adapt to differences in night-day timing.

...An experiment in which a group of people were plunged into darkness for 14 hours every day for a month. It took some time for their sleep to regulate but by the fourth week the subjects had settled into a very distinct sleeping pattern. They slept first for four hours, then woke for one or two hours before falling into a second four-hour sleep. (ref)

Dividing sleep into 2 4-hour shifts was extremely common and occurred all over the world. In many places they refer to "first sleep" and "second sleep."

If your people have the human need to sleep 1/3 of their existence, in shifts of several hours at a time, then they would likely have 3 or 4 sleep shifts per 48 hour day. 1 sleep shift is not biologically reasonable and 2 sleep shifts would give way too much waking time for most people.

But it's unlikely that such a perfectly even schedule would work out over the long term. It's more likely that the culture would have some longer and shorter sleep periods and this would work around the weather and which times were the most productive for what activities.

If it's a hot climate, midday is a good time to sleep and the productive work times would be morning and evening, when there was daylight.

If it's a cool climate (assuming it's colder at night), more sleep hours might be bunched up at night and the most productive hours would be midday. The largest meal of the day might be at night (since cooking warms the house and sleeping after large meals is good).

A tri-model sleep cycle (or 3 main sleeps with one short nap) might work better than a quad-model one. It depends on your culture(s), your climate, the types of work they do, how much commuting they do to work, if you have indoor lighting, etc.

Presumably you're to be worried less about solar flux, but more about temperature which lags somewhat behind. In big approximation: the late afternoon would tend to be uncomfortably hot, while just before sunrise uncomfortably cold. (land mass, atmospheric pressure, etc may influence here too) So I'd move forward the whole cycle by 4 hours, so sleep phase would start at solar noon.

Basically, you forget about the really long days and nights and adopt a regulated sleep mode that will keep you at peak condition. (I think NASA was also investigationg this to deal with the extremely short days and nights in low Earth orbit)

Not the answer you're looking for? Browse other questions tagged earth-like day-night sleep .

16
Would a human individual adapt to a change in the day-night cycle?
32
Sleeping on planets with very long days
19
Social effect of pill which defers need to sleep
8
What would cause a city to sleep during the day and work at night?
4
What is the optimal circadian rhythm?
22
Terminology for 24 hour wake-sleep cycle on world with longer dark-light cycle?
2
How would the people survive in darkness and be affected by the short periods of sunlight?
6
2 weeks day, 2 weeks night, how would the sleeping pattern of the planet's dominant species work with a 28 'day' Day?
7
What are the day and night fluctuations for a moon orbiting a planet the size of Jupiter?
3
How would a planet's (human) life adapt to inconsistent night duration?