We all know Pikachu, fuzzy, small rodent, with the ability to discharge electrical energy as an attack. But could Pikachu ever evolve in our world, and how would it do so?

Electric eel. Well, not an eel but knifefish and not fish really but actually a lizard (in it's evolved state).

Make electricy? Check.
Yellow? look at that dewlap, look yellow to me. 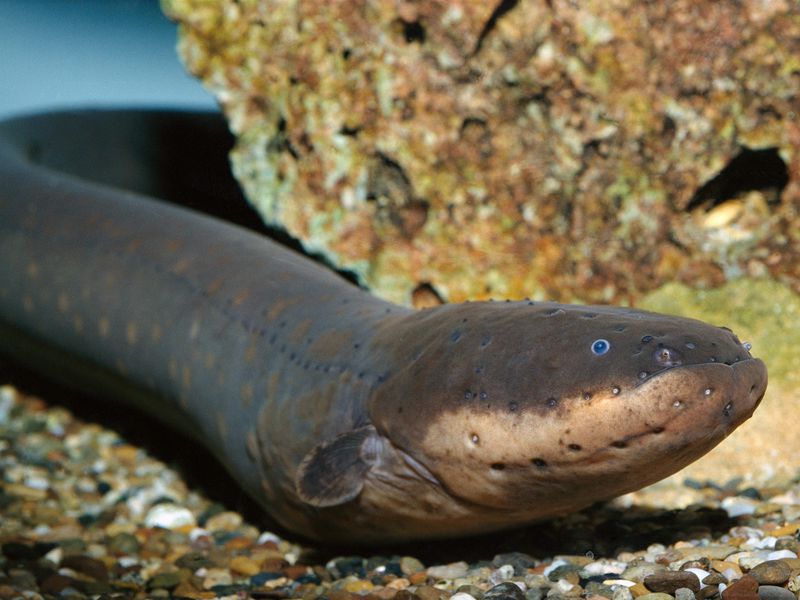 Rodent-like bodyshape? Depend on what you put emphasis on. If hairs then something like hairy viper of bearded dragon (who have yellowish tint on itself). If the snot and legs ratio then Geckos are very "rodent" like.

The ability to say it's own name? It's the easiest. It name would be "Kshhhh" or "Ssssss" or "Kheee". Name the animals from the sound they make not the other way around.

I am going to reuse my answer to the question on electric unicorns:

The unicorns are symbiotic with a jumping spider species, residing on the horn.

The horn is kept at (or can be quickly charged to) a sufficient high potential, and the jumping spiders can be directed to jump on the target while threading a thin wire of cobweb attached to the horn.

As the spider or a group of spiders land on the target the circuit is closed and the target is zapped.

Alternative to the spiders: the unicorn can blow mucus covered particles to the target, with the particles keeping a thin slimy rope of mucus attached to the horn. Zap as above.

Pick the one more suited for your story and stomach.

In this case you don't have a horn, but simply an appendix which can be dielectrically insulated from the rodent size body, where the spiders reside and from where they jump toward the target.

The yellow and black fur is a consequence of the same mechanism used by wasps and friends: it's an alert to inform the potential attacker that "I can hurt you badly, but doing so will cost me quite a lot. For each other's sake, stay away".

The ability to say its name is simply explained with an omophonia: we ear a sound that resemble Pee-ka-chu, and we think the beast is saying its name.

Not the answer you're looking for? Browse other questions tagged creature-design evolution mythical-creatures .

43
How do I explain a unicorn discharging powerful electricity at a distance?
7
Anatomically Correct Inklings
4
Material resembling fur that gives an advantage to creatures with electrical attacks