Is using Casaba Howitzer like devices as precision-cutting implements plausible?

How well would something like a Casaba Howitzer work as a beam weapon? A Casaba Howitzer is a type of directional blast that focuses energy from an explosion into a specific shape or direction. For example a nuclear spear, a gun shot in the chamber, etc.

The original nuclear shaped charge design called for the use of a tungsten plate...

As noted before, using lighter elements, such as plastics or even hydrogen, in a thick and narrow instead of wide and flat shape, you can achieve a very narrow cone and very high particle velocities. A Science & Global Security report from 1990 used polystyrene as the propellant material to produce a particle beam with a spread of 5.7° and a velocity of 1000km/s.

I’m imagining a focused high energy blast being used to vaporize objects in space. Weaker versions could be used to cut into space ships, metal, etc. How well would such a device work for concentrating energy? Or should we just stick with physical cutting instruments, and or lasers?

Well, in theory, it is a sort of "beam weapon" in the form of heavy metal plasma. You would have to have some hefty directional shields go refine the stream of plasma into a usable beam. would be much more cost effective to a massive particle accelerator. This relies on vaporizing a portion of your shield to create the plasma.

We can't do precision with chemical explosives, so no.

Take a look at this image of a shaped-charge-created hole in fortification armor: 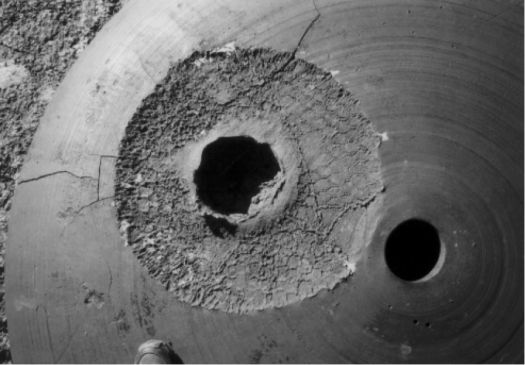 You'll notice you have a hole, unaffected metal, and between those material that was damaged but not destroyed. This probably doesn't count as precision. If it was, there would be a hole, and unaffected metal, with very little damaged metal.

This was a man-portable chemical explosive. A nuclear weapon is not going to be more accurate than this.

Here's a big problem with conventional nuclear bombs: they don't scale down. There's a minimum size dictated by the fissile material you're using. A pure plutonium-239 device would need 11kg of plutonium, and yield an equivalent of 10-20 tonnes of TNT (have a read up on the W54 warhead for a real-world device of that yield). That's about 40GJ, which is quite a lot of energy to expend on a single machining operation (and it is also quite an inefficient way to use up all that hard-to-make plutonium, which could be better used as the first stage of a much more powerful teller-ulam style thermonuclear device). Further inefficiencies will waste a fairly big chunk of that energy, but it is still a hell of a bang.

Next, remember that a casaba howitzer focuses a great deal of its energy in the desired direction, but not all of it. This means quite a lot ends up going in other directions, meaning you can't deploy your nuclear hammer too close to any other infrastructure that isn't very well protected. You probably want to avoid doing it in low orbits, too, because EMP is likely to annoy the neighbours and might annoy your own people, too.

Now, the stuff actually hitting the target will be a mixture of x-rays, neutrons, electrons and light nuclei. Each of those will affect the target in slightly different ways, and they won't all arrive at quite the same time. This is something of an inconvenience, engineering wise.

Finally, the nuclear blast hitting the target isn't going to neatly melt a hole through it. It'll heat up a comparatively shallow (have a look at ToughSF's calculations for some idea of depth; they're not correct, but they're in the right ballpark) section of the surface very rapidly, which may cause it to vapourise explosively, melt or merely suffer all sorts of interesting thermal and radiation effects. It won't have a neatly defined edge-of-beam either; power levels will drop off sharply outside of the bullseye, but given the scales involved ("ground zero" will probably be metres across at the target) there will be an obvious transition at the target which will make for ugly burning, scarring or fracturing none of which really imply "precision". See Itmauve's answer above for what a messy machining process looks like at small scales; now imagine it about 10m across, red hot and possibly radioactive.

So, it'd be expensive, inefficient, clumsy, messy and probably massive overkill. Fine for weapons, not fine for anything else.

You might try to fix things by making some gigantic electromagnetic focussing systems to collimate the nuclear blast still further, but at that point you may as well just build a simpler particle beam system that gives you much better control of beam parameters with none of the messy side effects of having an actual nuclear bomb going off.

Precision is a relative term--for implementations that a traditional cutting process that suffices, precision could mean cutting with an edge damage area less than one millimeter deep, but for something so huge that it require the energy of a nuclear bomb to cut into, which would be at least tens of metres thick, the damage zone could be tolerated for up to a centimeter.

Think blasting rocks, blasting is less precise than shaped charges, certainly much less precise than a diamond saw or a laser, but for the application--mining hard-to-break materials, or making a proper shaped large cavity for construction purposes, it is precise enough.

Lasers may suffice for cutting sheet metal or thin hulls, but if you need to drill a hole straight through centimeters of reinforced steel, then a shaped charge will be needed. If your substrate is almost hundred meters of nickel-iron, then a casaba hotwire with a narrow beam profile may be the only thing that can go through.

You will first cut the material with less precise methods, then machine the surface to meet your precision requirement. We are already cutting sheet metal using very imprecise methods like an angle grinder, but we then proceed to grind the edge of the product with other more precise but slower methods to bring the result down to tolerance, for thing like for example, welding.

The same thing, you uses brute force to cut up the material into the desired size and rough shape of a product, then uses the slower, but more precise methods to machine or cut/grind the rough shape into a shape closer to the final shape, and finally, you use a finishing pass of the highest precision tools to finish the product to the tolerance required, while not actually removing much material in the process. This is exactly what we usually do on CNC machines--rough tools handles the most part of material removal and shaping, then a slower tool machines the part down to the planned shape, then a final pass machine the part to the proper surface finish and tolerance/precison.

You will first cut your target to the rough shape with nuclear shaped charges, and the grind down the cut surface to the precise dimensions of your final product..

Not the answer you're looking for? Browse other questions tagged science-based technology science-fiction physics weapons or ask your own question.