I suspect that she is a woman.

"Long periods" is relative and opinion based. Kimberly Jeffries can hold her breath for six minutes even after having drank a load of coffee. Also notice that women are easily capable of outsmarting men, 'specially men who do not pay attention to their surroundings. The lady of the lake may dive only when someone approaches, and then she can use a snorkel made of reeds to spend really long periods underwater.

For the vast majority of people throughout space and time, the first word they learned is "mommy" in whatever their native language is. This is usually taught by a woman, with most of your early vocabulary being learned by imitating her. I think this is enough evidence that women can, in fact, not only talk to other fellow humans, but also teach them how to do so if required. 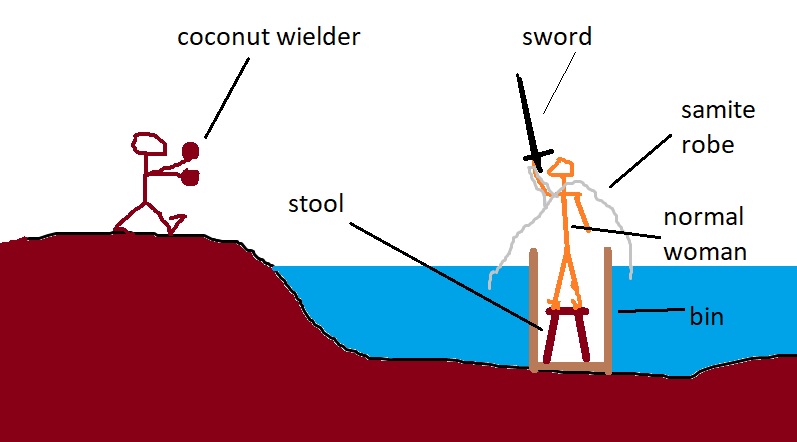 To question a Lady's habits is unbefitting of a dignified man

Aria of The Pond's exhibitionist tendencies to flaunt her water-adorned body under the moonlight is a known phenomenon among the people of the nearby village of Clovelly. In fact, despite her not having any contribution to the village, the inhabitants frequently send her meals in the form of a floating basket, due to her spending the majority of her time submerged under the reeds of the small pond. Understandably, outsiders who spots her meals mistakes them for offerings to the 'Lake Goddess'. The situation also gets worse when it has become tradition for outsiders to throw their perfectly usable swords somewhat dangerously into the pond as an offering for peace. Apparently, the elders describe her as 'easy-going', 'sweet', and 'polite', and 'a sparkling conversationalist', despite nobody having heard her speak at all. In fact, she is so shy that even at the slightest sign of an outsider, she retreats into the depths of the pond, brandishing the discarded swords at the sound of the banging of the two coconut halves she uses to summon her pet robin. Though she does not seem to be overly aggressive, I advise you not to disturh her in any way possible, as the village elders seem to have a liking for her.

13
Keeping the horde of nanomachines at bay?
14
Towers in the ocean; How deep can they be built?
4
Men Protecting Themselves From Bewitchment