Ratio of momentum transfer from weight to wind

Let's say I have a magic system where force can be redirected from one mass to another.
So if I have two objects of the same mass, I can link them so the force due to gravity on one is redirected into upward force on the other, keeping the two in equilibrium. 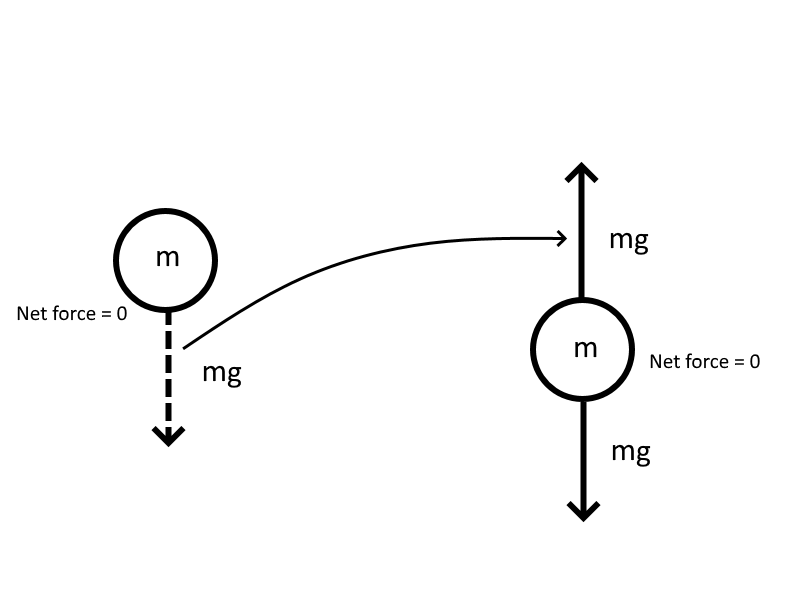 My question is about a flying machine working under the same principle, so all the downward force of the craft's weight is transferred to the air around it, suspending it and propelling it forward, presumably with sails or just a wide surface area. 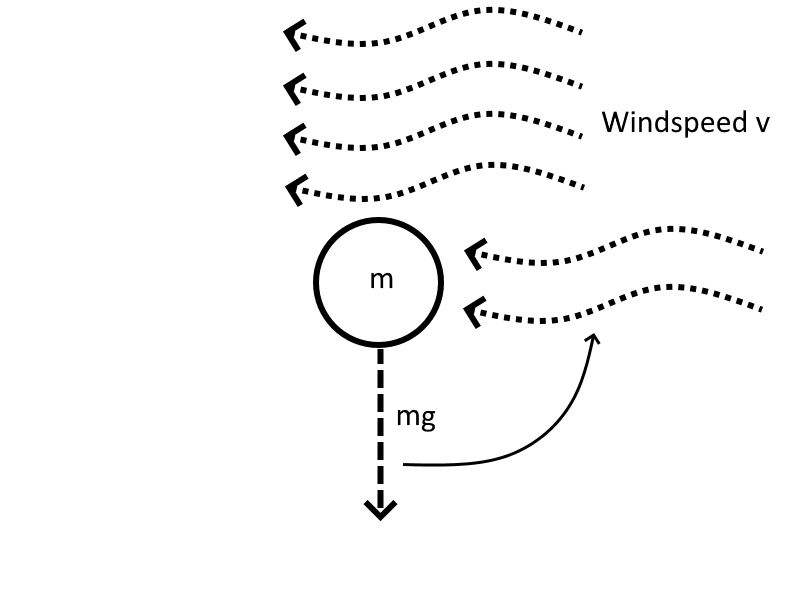 Let's say that the force cannot be simply applied to the craft directly either because the magic says you cannot redirect to the same object or because it would then effectively be falling sideways uncontrollably.

The question is, what would the ratio of weight to windspeed be like, and how big an area of air would you have to spread the force over? Would you want to make the craft as heavy as possible for higher speeds (say a floating rock), or lighter so it isn't torn apart by tornado strength winds.

Edit: assume the force is applied to all air molecules in an area relative to the ship.

Before we can answer with certainty, I think we need to know a few constraints of your magic system. First, how is the difficulty of the spell invoked? The mass of the object being affected? The length the spell is held? The number of spells cast? Beyond that, how does a single magical spell work on a giant block of air? Does it select all of the molecules in a specific area and continue acting on those particular particles until the spell is complete, or does it act on all the air present in the area of casting, so if it's maintained for a length of time it acts of completely different air particles at the end versus the beginning? If the latter, is your absolute area in reference to the caster or to the earth?

Based on most answers to these questions, I would personally vote for flying two identically sized ships in tandem, and making sure to keep the sails adjusted so they're always within magical range of one another. They need to have the "exact same mass", which sounds complicated, but I'm guessing wouldn't be too difficult if you measure the weights before lift off keep ballast on hand to adjust your center of mass as necessary, or to toss off one of the ships if a deckhand on the other drunkenly went overboard. You can then use a secondary spell to adjust the air around you to produce lift or propulsion.

Furthermore, unless you're acting on the air in a certain block that's relative to the caster, in order to continue pushing your ship, you would need to repeatedly cast and recast the spell. If it cancels if you get too far away from the initial target, or if you only had one magician casting and don't overlap your spells, your ship would frequently be dipping between spells as gravity starts acting once again (an interesting way to keep sea-sickness a relevant issue). You would also need to constantly adjust your equations depending on what altitude you're at to get the same mass per volume, which will affect your speed.

My guess for the actual construction of your ships is that it will depend heavily on whether you're more constrained by the number of spells or the duration of the spells. For example, you may have a take-off area where an initial high-force spell is cast to launch the ship initially, and then only have one or two magicians on board to redirect the ship in case of an emergency -- in this case, you'd want something with low drag. On the other hand, if your propulsion is going to be a constant force, but not quite as powerful, you may want something more like a naval ship's sails, to try to take advantage of the wind as much as possible.

It's basically a helicopter...

But we can actually answer this quite easily.

Just scale up the volume of air based on the weight of your airship.

Not the answer you're looking for? Browse other questions tagged science-based magic physics .

3
Acceleration insulation: I can build the Moon cannon, now what?
4
How can I meaningfully define the energy cost of magical levitation?
6
How could a magical enchantment minimize the effect a super dense and super heavy object would have on a floor beneath it?
5
How quickly will water displace if an object levitates above it?
7
Applying this kind of physical magic to walk on air
3
How much sand is required to create a fluffy barrier?