Airships are cool, and I would love to use them and see them used outside of steampunk a lot more. One key aspect of Airships is that they seem to have the square cube law reversed. For other things in the world they'll be able to carry less weight the bigger they are while Airships will have more gas volume and more lifting capacity because of it.

At first glance that might mean that Airships can be almost unlimited in size. But there are (potential) limiting factors. For example the Hindenburg needed to vent large quantities of its lifting gas as it crossed the atlantic to prevent gliding off too high as it burned fuel and became lighter during the trip. There's also the structural stength of the frame to consider, as forces from the engines, wind and steering will need to be supported by the Airships envelope or risk breaking apart.

The question I'm asking is: what is the (approximate) maximum size an airship could be?

Lockheed Martin is currently releasing a prototype for a new range of airships that are designed from scratch to be the biggest in the world. The LMH1 is an airship capable of lifting 20 tonnes of cargo, but they also state that the design can scale up to a carrying capacity of 500 tonnes.

Why 500 tonnes? Why not 5,000? I don't know the answer to that although I suspect that it's a matter of practicability - despite the inverse square cube law applying as you rightly point out, there reaches a point where even the most powerful engines can't compete with the sail area such a volume represents. Also, helium is a valuable and non-replenishible resource; there are already many doctors out there arguing that helium should be restricted for use as a medicine so that we don't run out of it. Getting that much helium together for an airship in the future may well be the limiting factor because of the cost of the gas. That said, you wouldn't vent it to manage ballast weights, you'd just pump it back into high pressure containers for reuse, but I digress.

Of course, one of the other limiting factors is size. Once you go beyond 800m in length, the practicality of storing or hangaring such a machine can become problematic. Not to mention getting cargo to it while it's inflating its air bladder with helium, and how long it might take to in/deflate that same bladder. There is also the fact that going beyond that size actually makes mountains a hazard if it can't maneuver through ranges and the like, and while I have no hard data on this topic I suspect that the bigger it becomes, the larger the engines need to be to counter wind resistance. In other words, while the square cube law works in its advantage in terms of weight, it doesn't in terms of friction with the wind. To move such a craft through normal atmospheric pressures might take more engine power than you think.

So, if Lockheed Martin are to be believed at least, then you're looking at around 800 feet in length being the maximum scale of an airship, although the precise reasons why they say that is the upper bound is something you'd have to ask them directly.

TBH I think the question is best answered by focusing on what your airship is meant to DO. For example: The size of modern ships aren't limited by what CAN be built, but rather by the size of the port facilities they want to visit, and by the Panama Canal. The latter wouldn't be relevant for an airship, but the former would. For example, you might be ABLE to build an airship five miles long, but it wouldn't be very practical either as a civilian or military vessel unless you had port facilities five miles long everywhere you wanted to go.

This design allows partial control of buoyancy via heating, whilst the bulk of buoyancy is provided by the lighter-than-air lifting gas, so fuel usage isn’t excessive. This might be relevant as you’re presumably looking to lift cargo with your huge airship.

The design is apparently popular for extreme long duration flights (e.g. the Breitling Orbiter 3, and Fossett’s Spirit of Freedom, which circumnavigated the world).

I believe cluster ballooning can make an airship to get size. With redundancy comes stability in ballooning and size unlimited. Using a centered ballast to control altitude I believe a massive air ship could be used in so many ways from launching interplanetary rockets to living. I had asked a few questions in Space, Physics, Earth science and other SE sites about the limits of an airship. Also, the square inverse law to build an air ship this way using with balloons would be similar to building an upside down pyramid. 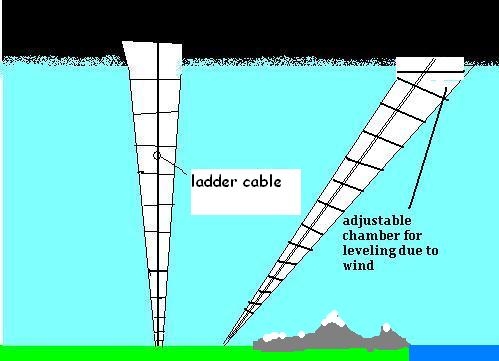 33
What geographic characteristics for a world would be needed/be most beneficial for airships to be a common mode of transportation?
9
Airship Aircraft Carrier Dimensions
15
Smallest possible size for a manned airship
5
General airship question: advantages and disadvantages of size?
6
Post-apocalyptic aircraft
9
What are some of the structural problems inherent to a kilometer-scale hydrogen airship?
10
Where (altitude, cloud type, etc.?) is it most safe vs. least safe for an airship to collect rainwater?
2
Maximum Possible Size for a Tethered Balloon?