I've been toying with the idea of a global highway that completely circles the globe. Ideally it would (on average) be as close to the equator as possible but also hit or at least come close to major cities.

The technology doesn't have to exist now or even be completely realistic, for example we could theoretically cross the Atlantic Ocean using a tunnel or floating bridge at the closest point in the doldrums between South America and Africa.

I know that road travel would probably not be ideal for getting across the globe like this, but for the sake of this let's say it's required.

My initial thought was from Brazil, across the Atlantic to Lagos, Across Africa, Cross the Red Sea and Persian Gulf to Asia, Through India/China/Japan, Across the Bering Strait, Down through North and Central America and back to Brazil. 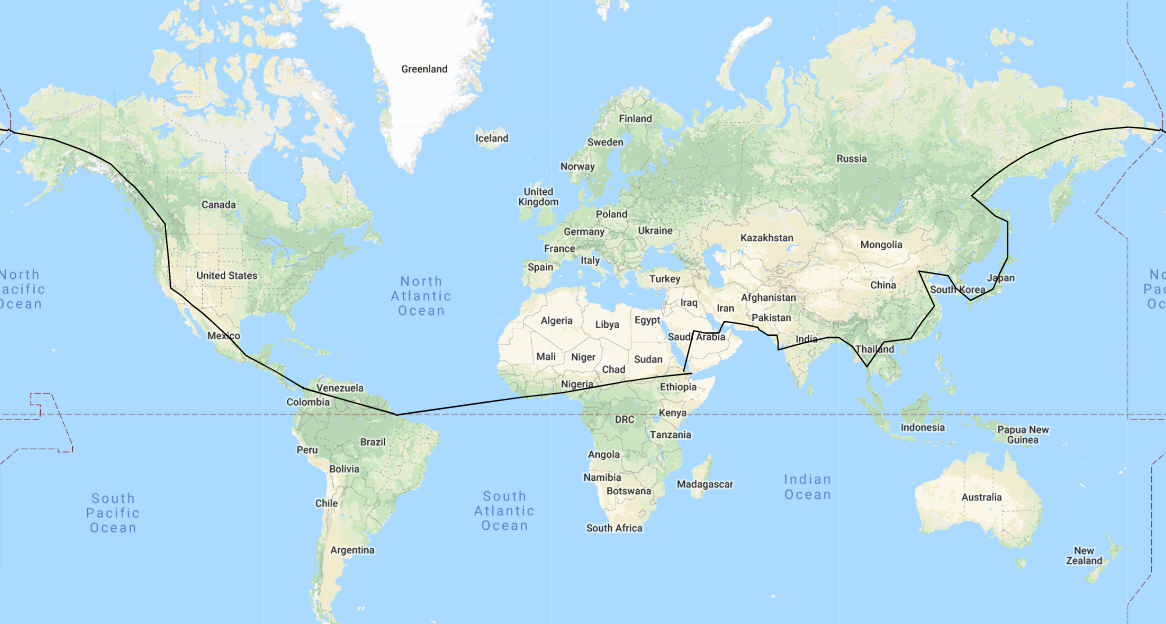 What would this highway look like? What path would make the most sense?

This approach might be a bit too far out of the box thinking, but it would allow you to get an exactly equatorial highway. In summary an orbital ring is a space elevator for grown-ups and allows extreme feats of engineering.

Crucial to an orbital ring is the concept of active support. Whenever you build a structure you want it to stay stable. Buildings do this by relying on passive support, i.e. their own structure can carry their weight. This approach is limited by the ability of the building materials to resist the force the rest of the structure exerts on them. This is Newtons third law, actio = reactio. Actio is the force the structures weight delivers and reactio is usually the force the material must be able to muster. Yet nowhere it is said that reactio must be provided passively. Imagine a friend of yours is walking over a thin plank, which would break under his weight. The passive support of the plank isn't sufficient to counteract the force your friend exerts. Now you go under the plank and push it up, so that it can hold your friends weight. You are providing active support. The great thing about active support is that you aren't limited by puny compressive or tensile strength, you are dumping energy into the system to keep it stable. And you can dump infinite ammounts of energy into a system.

Secondly some basic orbital mechanics are important for the ring. An object moves through space on an elliptical trajectory corresponding to it's speed. The faster the object moves (i.e. the more energy it carries) the higher it will move. If the object is restrained from moving into a higher orbit appropriate for it's speed it will exert a upward force on the restraint.

Now imagine bringing a stream of orbiting, magnetic slugs in a circular orbit arround earth, lets say 200 km high. They will move at orbital velocity. Arround each slug we have a a metal ring containing electromagnets. The rings are loosely connected and under power. They too move at the same orbital speed as the slugs. Then we activate the magnets, forcing the slugs to move though the center of each ring.

Finally we start decelerating the rings with their magnets. This will transfer their momentum to the slugs speeding them up. The now faster slugs want to move to a orbit higher than their current 200 km. The now slower rings want to move to a lower orbit. But the magnets force both to interact. To be precise the rings want to fall down with the same force the slugs want to go up. Like on the plank with your friend, the situation is stable and the structure stays in place. We continue this until the outer structure sits statically over the earth. The rings, also called stator, sit fixed 200 km over the earth and levitate magnetically over the slugs, also called rotator, which keep the structure in the sky.

At this point you can drop tethers down from the ring to ancor it and to install elevators. One of the rings many advantages is that normal nylon ropes will work for this and that no fancy carbon nanotubes are required. You can send tethers down to everywhere within a ca 500 km distance from the ring.

As for the highway you can simply builed it on top of ring. Call it skyway 001. You just need to speed up the rotator to counteract the weight and this force the roads and vehicles will exert on the ring. You might want to roof over the road though, as most cars do poorly in hard vacuum.

You feel fancy and concider it indignifing to be carted up in an elevator? You want to get the road trip going by driving up inti the sky to cross the atlantic? I got you covered. Just use the tethers to have a road ramp with a manageable slope hang under the orbital ring.

As for how it would look like? Imagine sitting in your car, driving down a highway in Ecuador. There is the lovely nature with mountains and dense, exotic forests on both sides of the road. After winding up a steep serpentine you stop in on the top of the mountain gaining an amazing view of IT. A gentle, impossibly thin silver ark spanning beyond the horizons on both sides. It shimmers in the light reflected of its solar pannels and seems to sit in the sky on a silvery cobweb of tethers, connecting towns and people with their elevators. Your gaze wanders eastwards, towards the point where you will reach the ring, slightly above the horizon. At that point the ramp branches of the ring, arcing gently down to our ancient earth. Its base lays hidden behind the next mountain chain. You will climb the ecalera del sol. Later that day you race over the skyway. Right and left views only granted to the few privileged occupants of the old international space station in the beginning of the 21st century are yours to enjoy. In the distance you can see the gold and green colors of Africa.

For all of the land based sections of this roadway no particularly new technology would be required, just a huge sum of money and standard engineering.

The tricky bit is building it across the Atlantic Ocean. One obstacle facing all options is the immensity of the distance. Even building a road on a solid surface for this distance would be an extremely expensive and time consuming undertaking. Building across this distance of water is preposterous. But putting aside the problem of scale how might this be achieved?

A standard tunnel running below the ocean bed would not work for a number of reasons. The pressure at such a depth would be enough to crush any normal tunnel, ventilation would be a nightmare and crossing the mid oceanic ridge would be particularly problematic.

A bridge would be better but would suffer from the difficulty of having a lot of very (very) deep supports or be an entirely floating structure. Floating structures would have to withstand hurricane force winds over hundreds of miles of open water.

I propose a hybrid system. The entrance would be on land near the coast into a conventional tunnel dropping to 100 metres below ground level and running out to sea. When the water depth exceeded 100 metres the tunnel would emerge into open water. Large sealed tunnel sections would be built in a suitable coastal area and floated out to sea above the end of the existing tunnel.

These would be weighted down with ballast to give them neutral buoyancy. The sections would then be lowered down until aligned with the existing tunnel to which they would be joined and sealed. The process would be repeated extending the tunnel across the ocean 100 metres under the surface. At regular intervals floating platforms similar to small concrete oil rigs would be built supporting tubes to the surface to allow ventilation and emergency access. These points could be anchored to the ocean bed by mooring cables. The subsurface tunnel would extend right across the ocean in this way and into a similar coastal tunnel on the opposite side.

You have been beaten to the punch 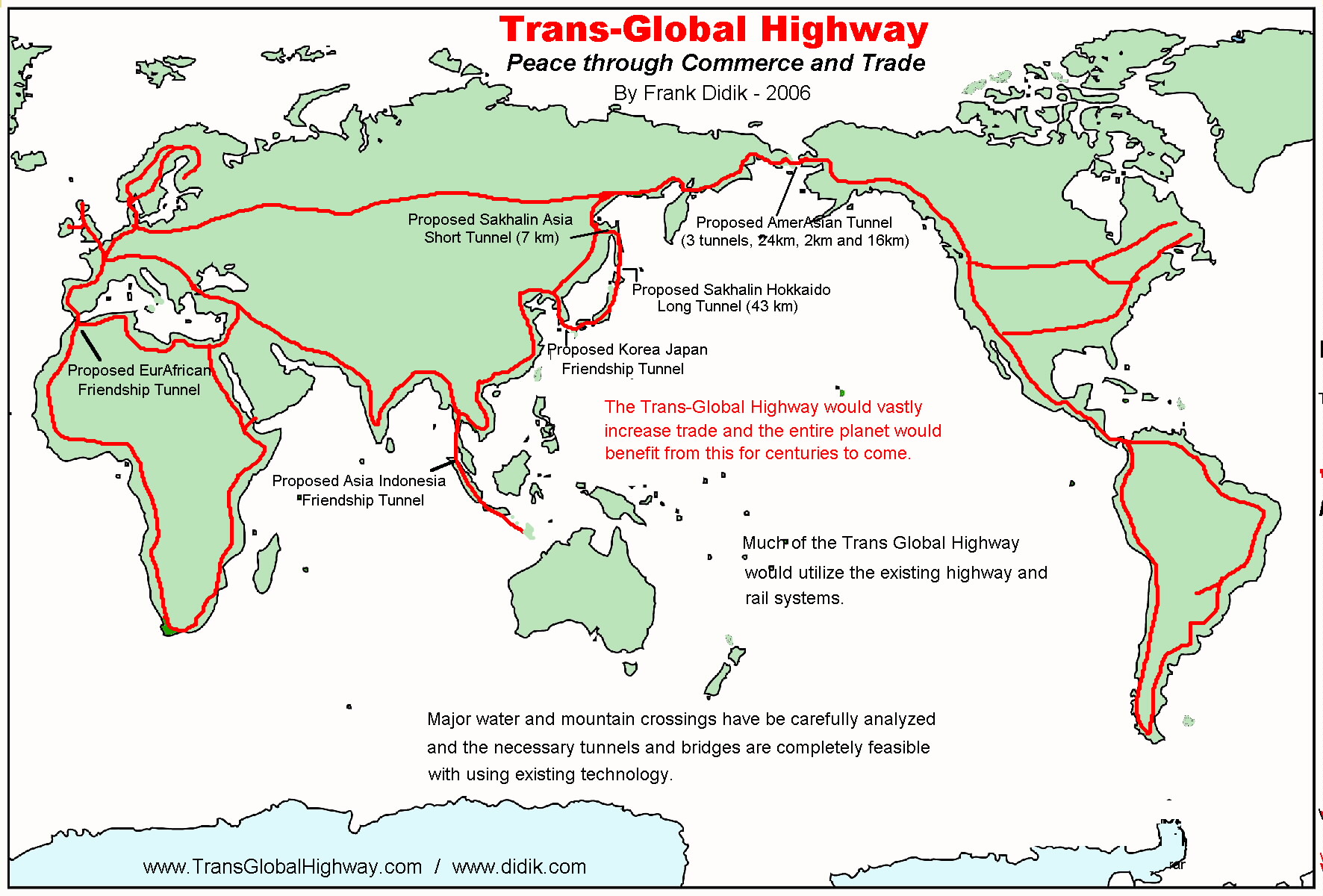 The major issue with this is the insanely long transit times that road traffic would take. Driving cargo by truck halfway around the world wold be a very long and expensive undertaking. There is a reason people use ships, railways and aircraft to transport things long distances.

The only way this might be somehow viable would be to make this some sort of global high speed railway system to carry container freight which is then offloaded and carried by trucks on short point to point routes. By high speed train, we would need to have trains moving at the speed of a Hyperloop (800 KPH) or even faster in evacuated tunnels using magnetic levitation. By combining the "throughput" of rail and the speed of aircraft, we would likely have a viable economic model to pay for the system. From the outside, it would mostly look much lie a giant pipeline. 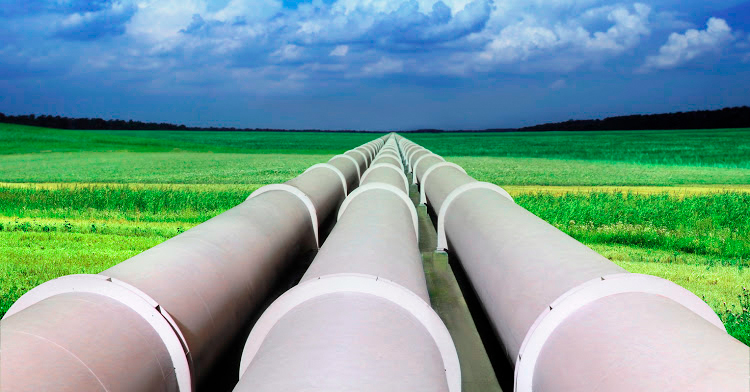 Not the answer you're looking for? Browse other questions tagged earth travel or ask your own question.