How much fat would need to be burned in order to shock-restart a human heart?

Imagine a device implanted inside the body which can detect when your heart has stopped and, in such a case, burns fat rapidly to generate enough energy to shock your heart into restarting, in a similar way to a modern defibrillator. How much fat would need to be burned to power this, without the need for a battery?

I had a quick google and found that the average defibrillator uses 200-360 Joules of energy, and 1g of fat burned can generate 3.6kJ but I think my research is poor or my understanding is poor, because 1g of fat to power a defibrillator unit seems like too little.

Your research is correct. 5 mg fat would suffice to provide the energy.

It takes a miniscule amount of electricity to affect a heart, especially if it is delivered right to the heart by a device. You are not jumpstarting it or powering it up. The electricity does not go to power a contraction. It is just a signal to reorganize confused myocytes that have become disorganized. Kind of like shouting at a bunch of rowers to get rowing together again. The shout does not itself move your boat. It does not even have to be that loud if they can all hear you.

Those external defibrillators deliver more of a jolt because they are not delivered right to the heart but to the skin, with insulating dry skin, fat and tissue between energy source and heart.

Note¹: Everything that's written in this answer is heavily simplified, if someone is interested in learning more about human physiology I recommend reading "Guyton and Hall Textbook of Medical Physiology", I used the 12th edition as a reference for most of the answer; regarding the osmotic power generator I'm by no means an expert in the field, so my approximations may not be correct, feel free to correct me in the comment section

Such a device may sound like science fiction but we already use those in medical practice everyday, what you're refering to is an implantable cardioverter-defibrillator(ICD), it's a kind of pacemaker but it's capable of defibrillating. It basically consists of a battery, multiple capacitors in series (to achieve high storage charge), electrodes that are implanted in the myocardium (the heart muscle) and a small computing unit to identify both the rythm (how the heart is beating) and the cardiac frequency (how many times in a minute the heart is beating).
The batteries that are used in these devices must be capable of outputting high energy pulses of at least 2-3A in order to quickly charge the capacitors, while also having a low drain current in order to power the computing unit.
The capacitors are in series so they can achieve a high storage charge (up to 850V). They also must be capable of emiting their stored energy (usually 30 to 80J) in a few miliseconds (20ms) in order to defibrillate.

Using fat as a power source

The main issue of using fat as a power source is that metabolic energy isn't directly translated to power. The energy stored in fat can be used either by simple oxidation (not very effective) or by processing it, through a complex series of reactions, into Adenosine Triphospate (ATP) (there's a net gain of 146 molecules of ATP during the complete processing of 1 molecule of "fat"). The energy generated via theses processes isn't the type that electronics can use, and in the body it's only used in other chemical reactions.
So, how would we use the energy currency of the body (the ATP) to generate energy for an electronic device?
Electrical potentials exist across the membranes of every cell of the body, this is because of the difference in the concentration of ions of the extracellular and intracellular spaces, the mainstays of this difference are Na+ (extracellular space) and K+ (intracellular space) but other ions play a role as well.
There are cells that are capable of rapidly generating a greater potential in order to create eletrochemical impulses (action potential) at their membranes, namely neurons (nerve cells) and muscle cells.
These potentials usually vary between -90mV (resting state) up to +50mV (action potential) depending on the cell, and they are created with the rapid influx of ions from one side of the membrane to another in a process that's called depolarization.

The membrane potential can be considered as a Nernst potential (EMF) and can be calculated using the following formula (this is the Nernst equation modified to calculate the potential of the intracellular portion of a membrane at 37ºC):
\begin{equation} EMF\text{(millivolts)} = \pm61*log\frac{\text{Concentration inside}}{\text{Concentration outside}} \end{equation} Now that we established that there's a physiological way to generate a difference of potential that could possibly be used as power for an electronic device (using pumps that require ATP to function, and ion channels) I suggest using some kind of osmotic power generator that is constantly recharged using the energy provided by the body - not just fat but any energy that the body has available, because it's very complex to activate the pathway to "burn" fat using an external device more so one that has no other means to be energized.

Note²: In order to simplify the calculations I won't take into account the increasing ammount of work that's needed by the Na/K ATPase while the potential difference increases, If you're interested in reading more about it you can find the formulas and precise values in "Lehninger's Principles Of Biochemistry". Also, I'm clueless about electronics so my estimations may be wrong.
Such a device generates electricity when ions pass through a membrane, so it harnesses the membrane potential turning it into electricity.
Let's consider that we have a perfect membrane with attached electrodes, with optimal resistance of 2mΩ, and capable of conducting osmotically induced current that's generated from ion flux from one side of the membrane to another via a channel that has simillar properties as the ion channels described before.
This generator would need to have two different cells divided by the aforementioned membrane (red), one of the cells (1) would have a more concentrated solution while the other (2) would not. There's a simple membrane (black) surrounding those cells and it should have both Na/K pumps (orange) and voltage dependent ion channels (green). 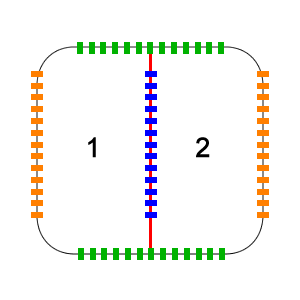 The Na/K pump only works against the concentration gradient while the energy of the hydrolysys of ATP (34kJ/mol) is greater than the potential energy of the given gradient. Therefore the maximum average fluid density at (1) should be equivalent of 34kJ/mol of the solution. Let's consider that we have a synthetic variant of this pump that's capable of hydrolyzing 1mmol/l ATP/s, so we can charge 34W/l per second, and also increase the concentration of (1) by 2mmol/l of K+/s while reducing Na+ concentration by 3Na+/s.
In order to generate enough current (3A) to power the capacitors we would need at least a concentration difference of at least 10x (61mV). This difference is the physiological difference of K+ (V = I(A) x R(Ω)). Considering the capacitance 150μF the capacitors will charge in 1.5μs (T = R(Ω) x C(F); Time to full charge = T * 5).
As you can imagine the discharge rate would be very low and the ions would be replenished quickly. The energy expenditure of this device would be around of 7.5cal/s while in usage, with some peaks after discharges.

A key piece of information is that not all cardiac arrests, or as you put "the heart stopping", are defibrillatable only the ones that the heart activity hasn't come to a halt, so there's still a rythm - but not an effective one (think of it as the heart only shaking), i.e. the heart isn't capable of pumping any blood whatsoever. Thus this device won't save everybody from this dire situation, e.g. when somebody drowns and their heart stops all the activity ceases so it's not shockable, but when someone has a Myocardial Infarction the organ keeps "shaking", so it's possible to defibrillate.

Your math is correct. It's just your intuition that is off. Our bodies are amazingly good at storing energy. The body needs roughly 10,500,000 J of energy every day, and 1kg of fat has 37,000,000 J of energy in it. Put that together, and in a day, you only burn 1/3 of a kg of fat (or the equivalent in food calories). Losing weight is hard!

For another intriguing comparison, consider the deadlift.

The world record deadlift is 500kg. Eddie Hall did that, lifting the bar 0.45m. A quick run through E=mgh shows that he outputted 2,200 J of energy doing that. That's about 2/3 of a gram of fat's worth of energy.

In other words, the energy used to start someone's heart is roughly 1/10th of the energy outputted by the world-record dead-lift, and that's just a few milligrams of fat's worth of energy.

In hind sight, it should not surprise you that the energy stored in fat is so much larger than the energy we see from our muscles. Think of how many times you have to contract your leg muscles to walk. If that took a substantial amount of energy compared to our fat stores, we'd starve!

Defibrillators don't work on a stopped heart to get it going again; they work on a heart that is working, but not functioning correctly, with the shock meant to essentially reset it into properly beating.

If you use a modern portable defibrillator, once you apply the electrodes or the pad and activate it, the unit will first perform an analysis of the patient's heart. If it says something like "No shock advised, resume compressions" that means it hasn't detected any activity in the heart and therefore shocking it is pointless. I've used a unit on multiple occasions where that has been the case; it doesn't detect any cardiac activity so doesn't waste time trying to shock it into starting.

Not the answer you're looking for? Browse other questions tagged energy medical body-modification or ask your own question.