How to Design a Flying Tree Spider and its Evolutionary Tree?

In my world there is a trading city in the middle of a vast stretch of wild, untamed forest. It was built to serve as an in-between for merchants as there is a peaceful kingdom both north and south of it. The city is on the banks of a north-south flowing river.

My giant spiders have evolved over the last million years in several different branches. The main branch is the giant Wood Spider. The second (and why there needs to be a safe in-between for trade) is the giant Water Spider. The one I am dealing with is a minor branch, the giant Flying Spider.

They don't actually fly, but more like glide between trees like Flying Squirrels. They hunt by swooping out of the air and grabbing whatever they are hunting (anything from Giant Wood Spiders to Humans and Wildlife like deer).

1.) How might these three extremely different species of giant Spider evolve to hunt one another within the confines of a single forest the approximate size of the Sahara Desert?

2.) Is the evolution of a "gliding" arachnid possible? If so how could this happen.

For the purposes of this question use the Jba Fofi as a model and work from there. Make sure the spiders are agile and deadly as they have to fight my town and pose a threat.

While I don't want to invalidate existing answers, I feel the need to mention that answers should not use extreme handwavium and should have some base in a precedent. No magic or "it just is because it is" answers please. Thanks :)

Like a jumping spider it is able to leap very far. When it jumps it holds its legs straight out from its body, and the hairs mesh together to form a glide surface, which extends its range quite a bit.

These hairs also make it very sensitive to vibrations, so its "hearing" is very sensitive, and it's also able to detect movement through whatever surface it's standing on.

Like a jumping spider, it doesn't build webs, but hunts its prey with sight and sound.

Edit:
Many spiders have hairy legs, so one developing long fine hairs is possible. With a long enough leg span, it would work a lot like a hang glider, or a flying squirrel. Not able to flap to produce lift, it would instead glide from tree to tree, or tree to victim. It would develop this gliding skill over time in tandem with its jumping: First ballistic trajectory, then using legs to provide control in the air, and finally gliding.

The wood spiders are the biggest, building webs that span tree to tree. They don't normally hunt for food, but wait for the food to come to them. Their webbing is very thin but abnormally strong, meaning if they make a web across a game path then a running deer could easily jump into it and be caught. The webbing is also difficult to cut with a blade. It can be cut, but takes some hacking, which vibrates the web and alerts the spider. The spider will also run trip lines out along the forest floor to alert it to prey.

Shirts woven from wood spider webbing, which is harvested from dead wood spiders, will stop a blade or arrow, similar to mail.

The flying spiders hunt using surprise mostly. By jumping then gliding towards their prey, they are able to use their mass to crash into and stun before using their venom to immobilize the victim. Because spiders have multiple eyes around their heads, a flying spider hunting a wood spider is not easy, but because of their quick reflexes and speed it's not impossible. A normal attack is to see a wood spider away between trees or on a trunk, away from a web, glide near the wood spider, fold in legs to enter a ballistic trajectory, slam into the wood spider to stun it, and bite it before it is able to recover.

Flying spiders do have to be careful of webs, since crashing into one will snare it, allowing the wood spider to kill it.

There are already spiders that 'fly'. They use their silk as a kite to pick themselves up and be carried away by the wind.

Now, in the forest you are going to have less useful wind and you already mentioned that they are more like flying squirrels and glide. This can be done with their long legs and 'parachutes' or 'wings' of spider silk. Their bodies can be wider and thinner to help with gliding and then make 'wings' of silk between the legs. By bending their legs they can change the shape from a 'wing' to a parachute to change direction and speed. And it can be used as a starter for a web to capture and contain their prey. Does double duty.

As Samuel mentioned in comment, small spiders have the ability fly already by simply letting out a long strand of webbing and allowing the wind to take them. That effect would certainly max out at some spider-weight much less than the Jba Fofi, but one could plausibly imagine the gradual evolution of increasingly efficient floater-strands, culminating in the development of little silk hot-air balloons.

Where does the hot air come from? A tiny flame generated by the spider's body, of course. These flying spiders also breathe fire, apparently.

With 3/4 foot long legs, these spiders don't need to glide - they could probably jump several metres.

However, you want gliding spiders, so:

Instead of gliding in the traditional sense have you considered having them spin particularly elastic webbing? They could set up a series of elastic bridges near high branches. When prey is below these lines they could grab on with their back legs and essentially "bungee jump" to the forest floor snagging their prey with their front legs and injecting venom while the webs spring them back up to the tree tops.

I would also suggest that gliding or flying may not be strictly necessary, have you considered a net-casting spider as a model for your tree top spiders?

As to how they might hunt one another. Your giant wood spider may have the upper hand in a straight fight; perhaps it's larger and stronger. But being larger confines it to the larger branches and trunks of the lower half of the forest. Mean while the gliding spider is "thinner" and smaller (relative to the wood spider, still bigger then a person) and could be described as spindly. However as ambush predators they are still a match the larger spiders below them. 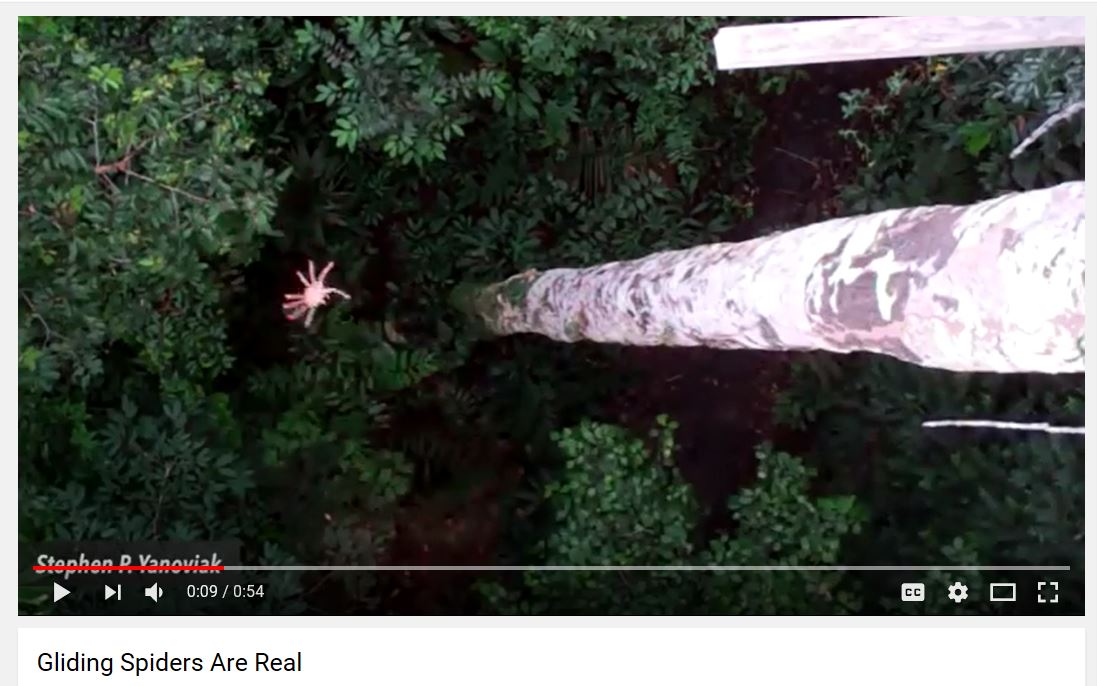 This time, the team collected dozens of common spiders known as "flatties" in American tropical forests, the moniker owing to their wide, flattened bodies. The team dusted these test subjects with fluorescent powder, then dropped them from up to 80 feet high and recorded their falls. To their surprise, the flatties homed in on nearby tree trunks a full 93 percent of the time.

"Gliding spiders represent an unlikely if not truly ungainly aerodynamic platform," reads the paper, which appeared in the Royal Society journal Interface. In other words, it works better than anyone expected.

These spidergliders are not freakishly weird. In the video that spider is definitely gliding around. So just scale yours up. Maybe Frisbee sized?

Not the answer you're looking for? Browse other questions tagged evolution creature-design .

12
Can you actually have a Forest Kingdom?

7
Large spider walking upside down
10
Alien Wings, a Different Design
7
The practicalities of riding an antlered stag?
14
Building a Giant Spider
7
Giant bug noises
8
Can a horse-sized flying creature grab and carry a human's weight while flying?
3
Would a large gliding predator be viable?
15
What evolutionary pressures could lead to tree dwelling octopuses?
6
How much water could the Crown Chalice hold as it grows on high-up tree branches?
4
What would be the physical characteristics of a sapient, mountain-adapted, gliding mammal capable of magically producing thrust?