How would an Earth-like world that is packed solid work?

By packed solid, I mean it has very fast growing vines and bushes everywhere like on non-desert living land plus lead crud and hidden small holes so movement is severely restricted. Similar on swallow water areas. Vegetarian food is grown in tiny scattered bushes and the vines and lots of animals on the vines to kill hence no such thing as large scale food production (people probably have no concept of large scale food production). Cities are similarly restricted by having a dense population of people to constantly cut back these invasive vines. The question is how this version of Earth's people be like culturally?

The vines and bushes have some fire retardant properties otherwise natural processes (lightning initiated fires) would have removed them long ago. Also these vines etc. are not smothering types of plants- such plants would be eradicated. The vines are synergistic with your main food plants.

You have described Georgia. 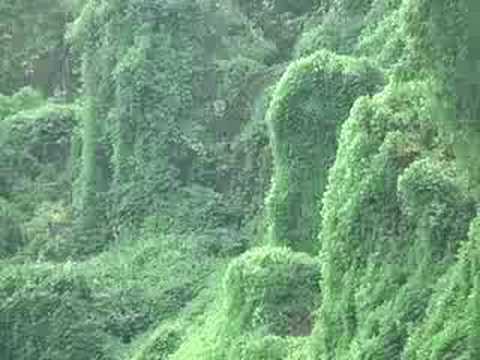 We live in that world. In land where there is enough water and gentle climate, vegetation can grow to make it impassable. The exception is forest, where the result of evolutionary competition has produced a race to the sun resulting in shade and the ability of humans to walk along.

You can find areas that look like this picture in the middle of cities in the South USA. Just leave things alone for a while.

I don't think your world would be problematic. If nothing else this copious biomass, harvested and dried, would provide a source of fuel. People would (and do) clear large swaths with fire - this is slash and burn agriculture, which is recite around the world. One could set domestic animals to eat the vines - goats work well and this is done in lots of places in the US. Kudzu is actually great animal fodder.

Imagining a vine 10 times faster than kudzu - you clear it and it is back that afternoon. You could cover the ground with rocks to prevent growth, or salt, or timbers, or sheeting. Prevent the vines from growing where you don't want. Or braid and train the existing vines into topiary that keeps itself out of your way.

Or better: set a thief to catch a thief. Humans will find plants that can compete with the vines (perhaps given some help) and use them to outcompete / shade out the vines.

You can read all you want about the battle between human and vine. Google kudzu. Similar battles are ongoing with English ivy and blackberry in other parts of the US.

Mankind would in all likelihood be aquatic nomads. Too much work on trying to keep sites clear to make land based villages really viable. Too much manpower used in clearing and not enough on food production.

Living on rafts and boats with food from gathering on land and fishing would be much more relaxed.

Not the answer you're looking for? Browse other questions tagged alternate-earth or ask your own question.

2
Figuring out how enemy computers work from their game consoles?
1
Earth Orbits a K-Type Star. What Would the Visual Scenery Look Like?
5
How much dirt would be needed to be added to the Earth to cover most of civilization?
1
Creating an earth-like planet without a tropical rainforest?
3
Can A Theia-Like Object Make Earth Richer?
5
How to make a floating islands on future earth?
4
Building a full-sized Lego Earth - what would it look like at various levels?
4
How Would Plate Tectonics on an Inverted World Work?