What kind of sports would be possible in zero to low gravity?

The Hegemony wishes to organise not only terrestrial games within the inner colonies, but has also wished to establish major sporting events for the other colonies in low gravity environments on top of this they even play a Olympics like event for the "Spacers". Examples of colonies that wpuld host these sports would be: Deimos, Eros, space colonies not built like Oneil cylinders, but more adhoc in nature, oneil cylinders with zero gravity sections, and any other colony significantly lower then 1g (earth standard). Martians gravity is the minimum on this scale (anything below martian gravity would count as "low gravity" in legal terms)

But they have run into an issue: what should the sports be like and which ones could be easily adapted to zero or low gravity for both entertainment and revenue for the larger space stations? What kind of sports could make the transition to space/be adapted without losing to much of the "feel" of the game? Personally I think basketball is a good contender.

Note: If you have a idea for a new sport that is vsygly similar to one on earth have at it

Logistics wise. For whatever reason sports are big business across the system so even if building a mass ice stadium is inefficient (a few would still exist) streaming would be a major industry.

By sports I mean basically anything from racing to lacrosse and everything in between.

If you create artificial gravity by placing contestants in a rotating arena, you create a lot of tricky Coriolis force effects. This would be nice for example in any sports involving accurate shooting or throwing, like Javelin, or Archery, as the contestant needs to account for the extra curvature and spin. Variations of Darts would work, as the distance to the target could be greatly increased.

You could try a no-water version of synchronized swimming, where a team perform maneuvers by jumping and bouncing from the walls and each other in a highly coordinated way. If you want to make a spectacular arena, how about having a giant ball of water suspended in the center, with variations on water polo, and swimming races along the surface, etc. Surface tension might hold the giant water ball together, but if not, you could have it in a glass sphere and give contestants breathing aparatus.

Curling might also be interesting. One player starts a heavy projectile moving down a track, teammates float alongside and fan it with air to steer it, and the goal is to collide with a target or the opponents stones (have them stick in a forcefield, or like velcro on a wall).

It's possible to run around on the walls of a cylinder even in zero g (https://youtu.be/S_p7LiyOUx0?t=22) so all the standard track and field events could be held in a similar way. High jump and pole vault might be really weird.

Combat and martial arts seem like good candidates for zero-g as well. Just place contestants into a ring and let them have at it. Maybe velcro shoes so they can get some grip on the walls. 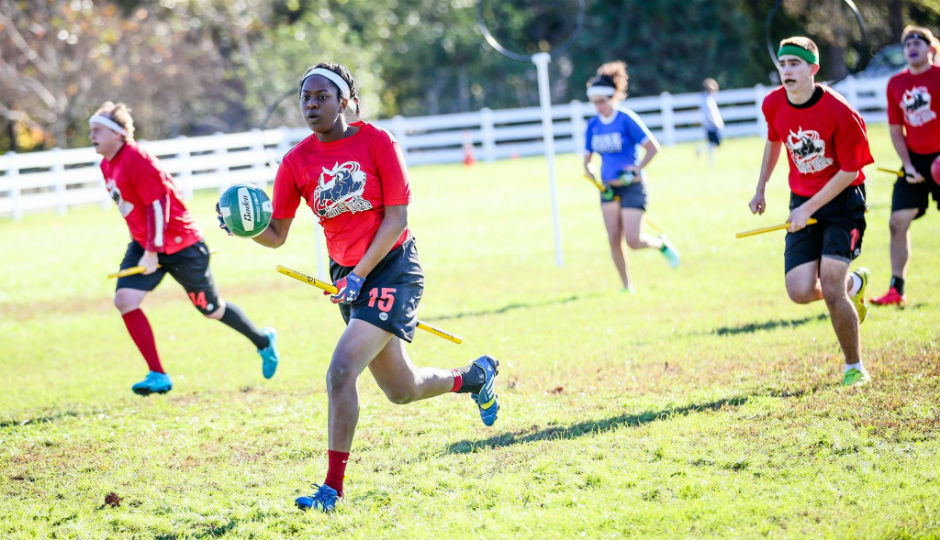 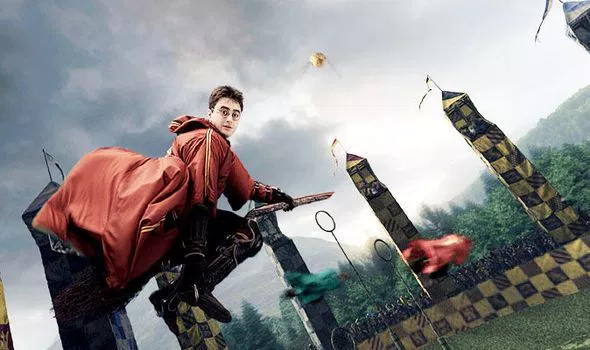 I can see a game variation on traditional water polo where instead of floating on a 2D plane (the surface of the water), people float in a 3D glass ball. The logistics of the game would be similar in that you'd have a goalie responsible for defending what is basically a hole in one side of the ball, but your other players would have to get the ball, and use the walls as de facto launchpads for their strikes at the ball and each other.

Their mobility would be restricted like in water polo, but for reasons of purchase rather than having to move through a heavier medium. In that respect, some aspects of the game mechanics would remain very similar but others would change significantly.

The other advantage of such a setup is that your stadium could also be 3D. Because there is no 'up' in space, your people could effectively sit around the outside of the stadium in a spot where they effectively velcro their backs to the walls and the stadium would subsequently have a great view from almost every seat in the house.

A good portion of my favorite bits of Ender's Game was the description of their war games in zero-g. This sounds like a perfect sport to run for fast interesting spectator sport.

The objective of the Battle Room game was to either freeze all soldiers of the opponent's army, or to have four soldiers place their helmets, unfrozen, on the four sides of the enemy's gate, and have a fifth soldier enter. The game did not technically end until the enemy's gate was entered in such a manner (unless every member of the opposing army was incapacitated)

what should the sports be like and which ones could be easily adapted to zero or low gravity for both entertainment and revenue for the larger space stations?

Well for starts any sport based on the physics of gravity bringing the ball or focus of the game down to score points, end a play, or otherwise interact with the rules (read that as, pretty much all of the sports we have) will need substantial rule changes if not be utterly implausible to play in zero gravity. Not to mention my knowledge of zero gravity is iffy but I believe it is substantially easier to hurt yourself in such an environment than actual gravity so you might have issues on that front as well.

However to give an idea- most games would become truly 3-dimensional. In theory they are now but the game (whichever sport you choose) is for the most part 2-dimensional as nobody can fly and all motion that takes place above the ground will inevitably end. Basically every sport becomes an oval instead of a flat plane and the rules are reformed around this change. All walls become the "ground" for our gravity equivalent. 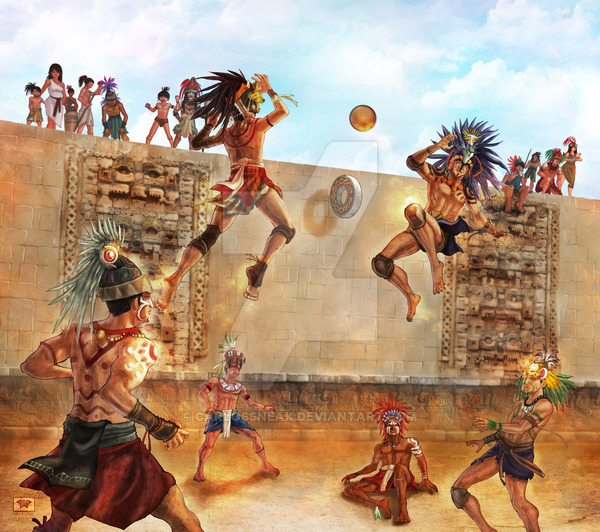 This game has a long imperial tradition in Mesoamerica where the most prominent cultures had some version of it, including Aztecs and Mayans, just to mention the most well-known. According to wikipedia:

the game is one of the oldest continuously played sports in the world and is notable for the fact that it is the oldest known game using a rubber ball.

It is like raquetball but you use the waist, the forearm and a stick depending on the version of the game. The team that scores 8 points wins.

The Mayans introduced vertical scoring rings so that the game ends when the ball passes through one of them. With this innovation you have racquetball plus basketball all in one with participants sometimes playing for their kingdoms or lives (see below).

It is said that kings and nobles played and put a wager on their own territories.

According to some paintings and carvings, losing players were decapitated after the game was over.

There Great Ballcourt in Chichen-Itza is so big that some archaelogists think nobody could play in it and was built to impress visitors and enemies alike. The scoring rings are so high above the ground that only demigods could end the game in this way. In space, however, human players could make it.

Here you can have any game you want. Look at competitive League of Legends, Starcraft 2 or COD. With more immersive VR or even fully immersive steering via brain-maschine connection you can have any sport imaginable and even some, which are impractical today (like full contact gladiator fights). This would also solve the problem with training differences due to different home environments.

Gravity as a ball mover is gone, yet you can still use actio = reactio for ball games. Think stuff like squash or table tennis. The SiFi show The Expense has a game like this in the outher planets.

Quidditch has alredy been mentioned in the comments, but you can turn most modern 2D games into 3D ones with a bit of creativity. Just give the players a way to manoeuvre the large hall they play in. (have ropes in regular intervalls, jetpacks or grappling hooks) Other games (pacour or paintball) might develope interesting variants in 0 and low g, too.

Fighting in free fall sure is gonna be interesting. Martial arts have always sprung up in many cultures. This scene could be supported by law enforcement or the military, since they will be interested in new fighing techniques.

Not the answer you're looking for? Browse other questions tagged reality-check space sports .

12
What sports could safely and easily be played in space?

10
How would basketball change to accommodate zero-g
12
What sports could safely and easily be played in space?
18
Volume-efficient team sports for a narrow environment
2
What type(s) of sports would interest a society of agnostic zombies?
14
How would I design a human body for zero gravity?
4
What would sports look like if human beings could fly?
2
Will be electronics production in zero or low gravity possible and how soon?