Can you survive by growing and eating your clothes?

On Blue Planet 2: The Deep (at least, that is the title in the US version), there is discussion of crabs that grow bacteria on themselves as a food source. In the show, they kind of looked like they were wearing sheets of thin material, 'clothes' if you will. These are called yeti crabs (Kiwa hirsuta). They have long hairs on their fore-claws on which bacteria grow. They may, although it is not confirmed, eat these bacteria.

Is it possible for a human-sized creature, with sufficient metabolic activity to develop and use tools, to grow enough bacteria on their own body to use as a food source?

Pounds of Food Per Day

According to PrecisionNutrition people tend to eat around 4 pounds per day, though that varies a little bit. So the poundage shouldn't be a significant problem, especially if the critter can distribute that weight around the body.

Fats are associated with better health, are a source of energy, but only 2 need to be included in the diet - Omega-3 and Omega-6.

Fiber is useful for the diet, and is thought to help protect against colon cancers, and does help with the gastrointestinal tract, but isn't necessarily essential, especially if the creatures don't live long enough for cancer to be an issue.

Proteins are necessary for a highly mobile creature, but is present in a number of plants- primarily beans, nuts, and seeds, but also present in some algae and mushrooms

There's a handful of mineral requirements that pretty much demand that the user seeks them out, like salt, potassium, and iron.

Then there's a handful of vitamins that can be provided by plants with Calcium being primarily available through leafy veg or beans and the like.

With the nutritional requirements, we have to rule out any single plant being used as the entire diet. Plus I'm pretty sure that growing anything that has roots longer than a couple of millimeters would be pretty disastrous for a creature without some form of exoskeleton.

All those plants you're growing are going to be taking their nutrients from somewhere, and unless the area directly around them is nutrient rich, they're going to take it from the thing they're growing on.

It takes about 4000 square feet growing food to provide enough for 1 person to eat for a year. Assuming that the average human has about 22 square feet of potential growing area, you'd need about a 18000% increase of surface area to grow enough food to survive for a year.

But that's a bit dependent on the lifestyle of the creature. If you didn't need them to be active in a similar way to humans, they'd end up just being plants, because growing your own food is hard work, and staying still and sucking up nutrients is just significantly more effective for anything that doesn't need to hunt.

To be completely self-sufficient on food that's growing on the critter, no it's quite impossible for something with the size and lifestyle of a human to subsist entirely on food grown on it's body. Plus the evolutionary pressures would push something that lives by growing things on it into a very sedentary life style anyway.

On the bright side though, food grown on the body could be a little bit of additional nutrients (again, presuming short roots that don't penetrate the skin and a nutrient rich atmosphere) and act as just a little boost.

There's downsides to having a lot of surface area for things to grow though, especially for anything with an approximate to blood- fleas, lice, aphids, ants, and all those nasty parasites can make use of the same structures that would be used for the plants by just grabbing on and taking a ride on its new permanent living space. With associated diseases. YAY!

It's possible but complicated.

The main problem is that the funghi, bacteria or algae should be able to produce their food (algae and some bacteria are autotrophs) or to get it from some external source other than the skin of their host (i.e. you cannot have your cake and eat it). And they should be able to do it at a rate high enough to sustain themselves and their host. Therefore, it would help a lot if the host is echtoterm, slow, has large dormancy periods, etc.

Shepherds and hunters-gatherers in non-modern societies are known to use blood and/or mud to protect their skin and refresh themselves when water is not available. This mix could become an adequate substrate for growing some weird combination of bacteria, funghi and algae (lichens are in fact a combination of algae and funghi).

On the other side, some reptiles and amphibians eat their skin (some of them are capable of regenerating their tails or limbs).

If you combine all this in an adequate environment (swamp, lake with lots of nutrients), it is possible to imagine it but impossible to make it work for a creature with the metabolic requirements of a brain capable of tool development.

EDIT: This other question about photosynthesis in animals is related. It was cool to find out some sea slugs get their energy from kidnapped chloroplasts!

No, you can't survive this way.

It is frequently stated that about 1 acre (0.4 hectares) is necessary to grow the food to feed one person. Alternatively, you can look at the requirement to eat about 4 pounds / 2 kg of food per day.

It is not possible to grow that much nutrition in the limited area and weight that could be carried around on your person. You cannot receive enough sunlight, or other means of supplying the required energy for your food source to in turn feed you.

If you change the concept to spending your life in warm water filled with nutrients, and your food source consumes those nutrients, it might be possible to get enough food (though I would not call this growing the food in the sense you use). This would still have significant issues in terms of nutrition balance, dealing with the waste stream of your food source, etc., but might be possible.

I don't know how much force is encountered by those long hairs the bacteria grows on, but I doubt it's very much.

Humans, on the other hand, are constantly doing things that rub against the skin. From donning protective clothing to rebuilding the engine of a '57 Chevy to sumo wrestling and so many more things... My point is, The surface area from which you could successfully scrape whatever growth you want to eat is considerably smaller than the the human itself. Such a person would need to live a very inactive lifestyle for this to be practically successful.

But, what about human-sized creates? I'm still doubting it. Crabs are fairly sedate in their life style. Human-sized fish (oh, let's call them "sharks") swim through things like kelp. Land-based creatures roll around on the ground or rub up against trees to scratch an itch.

So, plausible? Yes. Practical? Hard to believe. Does that matter? Not for a story. In fact, the idea of a humanoid species developing beautiful lacquered tools for gently scraping dinner off their backs would make for a disgustingly interesting story detail.

Are we maybe talking a bulbasaur here? 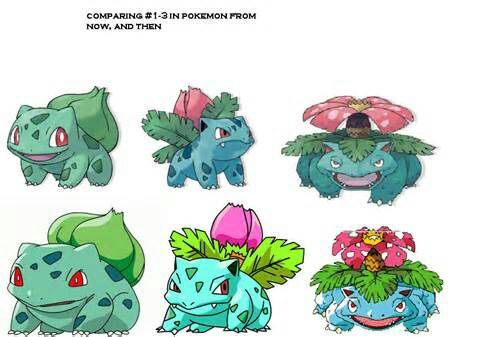 You have a symbiotic relationship with a photosynthetic creature/plant, that potentially relies on the host for some nutrients, but provides plenty of carbohydrates. Certain species of bamboo grow at the rate of 35 inches per day, which sounds like a plant could plausibly produce enough biomass to feed a rather large host. If the relationship is a mutualistic one, then the host could provide certain rare nutrients that it finds in excess, reduce competitive species, and or provide transportation to sunnier areas, etc.

Maximum weight of bacteria is ten to MINUS TWELVE grams. Picogram. 0.000000000001. Even if you assume that bacteria is made from Fat you would need to grow around 222 grams of edible bacteria on you.
On your hands there is an estimated 3200 bacteria's right now. They don't even weight one gram. To be exact they weight around 0,0000000032 gram. You would need 300000000 hands to grow one gram of them. Hand surface areas is around 1% of whole human body. Even if you manipulate body surface to be twice as much you are still 15000000 "hand surfaces" short.
But you could grow seaweed on you. 100 grams is around 45 calories. What you get with seaweed is microclimate where some larger than bacteria organisms can live and you could live off them. Including fish.

9
What could justify an animal photosynthesis?

13
Can anything survive by eating rocks and other ground minerals?
14
How to Make Elvish Immortality Biological
10
Can humans survive just by eating hairs and nails?
1
Reality Check: Is This Habitable Long Term for Humans
9
What could justify an animal photosynthesis?
1
will there complication to the body especially the guts, if basically a single senzu bean make a person never need to eat for the rest of their life?
3
Poison needs time to affect a creature (especially large ones). What strategy would dragonslayers use then?
26
An island world where potatoes are the only land vegetation - can it support human life?
3
Edible plants that can survive climate change while living in a desert where it's over 110 degrees...in the winter