In building an sentient alien that is unique among the sea of humanoids, I aspire to explore quadrupeds. For a quick visual reference, this is what I have: 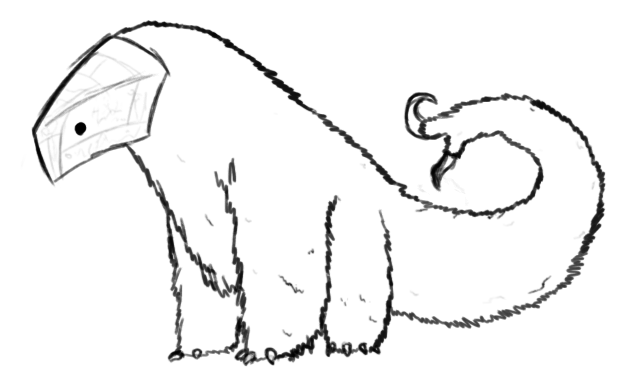 proportions are definitely off, but in reality they'd probably be more bear or cat-shaped, or some mixture of the two

The main thing I'm having issues with is the prehensile tail. For this species, it's the key to their tool use and advancement to a sentient race. However, aside from a best-case-scenario arboreal evolution history, I'm having difficulties justifying a possible evolutionary path that leads to a split in the tail, resulting in two dexterous "tentacles". So, the first set of questions is thus: is a prehensile tail even a plausible way to use tools and advance? If so, could a prehensile tail "split" as shown? Even if it's possible to split the tail, is this even necessary to allow the species to effectively use tools?

As a side thought, I'm also taking into account the rest of the creature's physiology. Humans do not have fur or a thick layer of blubber to keep us warm; that costs energy. Energy that could be better used to enhance the brain. So, even with a thick layer of fur, could this race still have enough energy to attain sentience?

To be on the same page, I use sentience in this fashion: intelligent enough to form complex social networks that turn herds or packs into tribes, and then into towns, cities, and nations.

Used to be cute and little

Just because now they are huge doesn't mean they were always. At one point they used to jump from tree to tree using it to grab branches.

Given a few evolutions they now live on the ground and use their tail to create nests.

Given a few evolutions and an ice age: They grew to be much bigger and able to put on the pounds of fat and fur needed to survive long cold nights. They're tail was now used to find and dig out food from the snow and ice.

Evolution happens again (does it ever stop???): It now knows to throw things.

Fast forward: They throw rocks at walls and collect the sharp pieces. Hunting/Foraging is now much easier. Brains gets bigger.

Blink: Fire can now be created at whim.

There is not much issue with your creature. Most of the issues are explanatory more than anything else.

The split tail is not an issue split tails have evolved more than once in earth life (costly in marine animals), and if you look at an elephants trunk it is easy to see why such a structure might be useful, they basically function as fingers. You could even have it be a common feature in a whole group of organisms on their planet, maybe the split serves some important developmental function so it is never completely lost in the clade. That gives as strong jumping off point.

Your creature will likely use its mouth as well as it really needs another limb for generating counter forces, the opposing "limb" does not need fine manipulators but it does need some strength and gripping ability. Precisions angled impact using opposing forces is necessary to master flint knapping which is the beginning of really all advanced tools. You can do alot with one hand as long as you have grippy anchor to oppose it. Unless I am reading its anatomy wrong the neck is fairly long and stout so it should work fine.

The full size of the brain was probably not achieved until after the advent of fire and cooking as it was in humans (the hominid brain rapidly doubled in size after the discovery of fire) cooking food drastically increases its available caloric value.

Your real problem is why it has the tail in the first place, anatomically the animal is not that different than a ground sloth or a chalicotherium. The only real use of a prehensile tail is in climbers so it likely evolved from a small climber, as it evolved larger size is altered the feet into something more elephant like, losing any use as grippers. It will need to be far more social of course and may even end up more social or at least more cooperative than humans, with the reduced grasper count. But you need a reason it kept the prehensile nature of the tail, It is a lot of tissue and neural support it will need a strong selective pressure to keep it around. The exact reason is going to be up to you, I suggest some kind of very strong sexual selection or something similar or perhaps some unique feeding mechanism. Because it is an alien organisms perhaps it serves a purpose not seen in earth vertebrates, like as a mating organs or some vital use in child rearing.

is a prehensile tail even a plausible way to use tools and advance?

This might be the limiting factor for your sentient, tool-using species. I can think of two problems with this design:

If your creature relies on it's eyesight (which I assume it does) it will have difficulties knowing if what it tries to do actually works or not.
Try solving a rubiks cube. Pretty hard, right?
Now try solving a Rubiks cube behind your back...

Solution: long neck or scorpion tail
I think your creature would either evolve a long neck so it can turn around and look at it's tail or evolve a long scorpion-like tail so the end of it can dangle in front of it's head.
If you go for the scorpion tail, instead of going above the creature, it could also go below. Think of it like a dog tucking it's tail between it's legs. I think this would be more fitting for a cold environment since it would minimize heat-loss.

If you carve a spear you hold the stick in one hand and use the other to carve. Having only one arm makes this a lot harder. You have to use the environment to fixate the wood so you can use your arm to carve. It might not be impossible, but your species will have a very hard time building anything if they only use their tail.
An easy solution would be to not only use the tail, but also the "hands" and/or mouth. Gorillas for example walk on four "legs" but still use the front two for grabbing stuff.

You seem to have thought about this problem as well and came up with the split tail as a solution. I think this could work quite well, the proportions are a bit off however (as you said). The "tentacles" should be a lot longer to serve the function of a "left arm" and a "right arm". By that I mean that both the left tentacle as well as the right one should be able to independently grab an item.
Do they need "fingers" for that? You could split the tentacles again, which probably makes grabbing things easier, but it's not necessary. One tentacle can also just wrap around an item to grab it.

Figure out a plausible reason for an animal to evolve a tail that can grab stuff and the rest is easy. Evolution itself will try to move your tail in your field of sight and will also favor a split tail as this means you can grab two items which makes tool building just that much easier.

I agree with Murinus about being able to see what it is controlling. I had written out much of that myself (scorpion tail), before they posted first. I'd also point out good peripheral vision could be useful. Perhaps this creature is a prey animal. Remember also that long skinny appendages don't especially do well in the cold. The more surface area, the more heat you lose.

Reasons to use a tail

As for whether or not a tail could evolve in such a way, if the tail was not originally like this, perhaps it used to suit some other purpose. Perhaps this species dragged food, young, or shelter materials (fallen trees) long distances over snow or ice with it. Over time, this became their primary use, and they got better at gripping and manipulating such things.

Perhaps what is now a tail (or two), used to be another pair of legs, that, over time, stopped being used as legs (because it was too busy dragging things back to its shelter/clan, or while migrating), and grew more and more tail like. This form of tail could explain the split, but would more likely have some form of fingers, or claws, than it would tentacles.

Your creature could eat using it's ass an poop with their mouth. The tail would be really useful in that case, and I'm pretty sure it'd enable some laughs.

It is a mammoth.

Elephants are intelligent, social and long lived. Mammoths almost certainly were, and were floofy to boot. The intelligence of elephants is clearest when they must survive in arid lands with low / intermittent food density and hard to find water. They remember the tricks they figured out and the old ones teach the young ones. That is true for Siberia as much as Africa.

That hard triangular head is a tusk equivalent. Your creature uses the head like an elephant uses the tusk. Probably it can be more vigorous about it. It could break ice. It can break up frozen carcasses. These things can't afford to be picky in the frozen wastes.

The tail is a trunk. It is for all the elephant like things the trunk does. Elephants get a lot of mileage from their lips too, and for this lipless wedgehead, the tail does lip duty as well.

Not the answer you're looking for? Browse other questions tagged science-based reality-check anatomy intelligence or ask your own question.

29
The universe is in a long, slow decline to darkness (the stars are going out) - What can we do about it?
98
Would intelligent life evolve any other body plan than humanoid?
11
Can hive-based aliens develop advanced technology without telepathy?
15
Anatomically Correct: 4-legged sapient creatures (“centaurs” etc.)
11
Is a four armed arboreal reptile as described viable?
18
Anatomically Correct Boar Troll
4
What material(s) should I use to protect my androids against ballistic impacts (bullets) and what protection would I get?
11
Mermaid Land (and Sea?) Combat
5
Unplanned Colony: what industrial level could be recreated in the short-term?
3
Immune resistance to biological colonisation