Does anyone know of any compound/substance one could have access to in a stone prison cell (From food? The rocks? The metal bars?) that could be processed through rudimentary means into a quick acting poison/venom?

In the story I'm writing, the protagonist finds themselves locked up and enslaved in a medieval prison/castle. Though there is magic in the setting it is not available to him.

My current idea was that he gathers apple/apricot seeds and crush them to make a cyanide-based poison, but by the looks of it there's no way to make it concentrated enough for it to be a relatively small dose.

Ricin is found naturally in castor beans, a common plant (in various parts of the world), and extremely fatal in tiny doses. In fact, the CDC has a bioterrosim page dedicated to it

Castor beans may be used in different types of foods and/or natural remedies. Depending on the timeline and location of your story, as well as other details (such as whether or not the prisoner is forced to work in the kitchen, where s/he may have access to raw castor beans) makes this a viable option.

Although onset is a few hours, ricin is extremely fatal, there is no known cure, and has been used by real-world assassins.

Improperly canned foods can cause botulism - it would be rather easy for a prisoner with access to raw foods to prepare / hide the foods until they rot and the bacteria develops. Getting it on/in a guard without them noticing will be more difficult. Although possibly fatal, it's rare, but very debilitating.

Being in a prison is quite possibly unsavory. Quite a few fungi are poisonous and could be growing in moldering hay on the floor of the cell

There are also lichens that are poisonous which could be growing on the walls.

A fungus also known as ergot, found on rye grains and in rye bread containing a natural LSD substance.

The convulsive symptoms from ergot-tainted rye may have been the source of accusations of bewitchment that spurred the Salem witch trials.

Thought to have inspired the Triptych of the Temptation of St. Anthony, this is the detail of Saint Anthony being carried into the sky by demons: 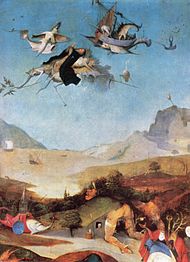 characterized by muscle spasms, fever and hallucinations and the victims may appear dazed, be unable to speak, become manic, or have other forms of paralysis or tremors, and suffer from hallucinations and other distorted perceptions.... violent burning, peripheral pulses and shooting pain of the poorly vascularized distal organs, such as the fingers and toes...

If the poisoning continues long term then gangrene of the limbs and death will result.

Leave your food for a month alone. It will either rot or develop a fungus. You dry the fungus and mill it. If it will rot you just save the "juice" and use as a poison. In both cases you need to create concentrate for it to start acting quickly.

If your prisoner get feed apples he can create cyanide form apple seeds. Downside to this is that 80kg person need to consume 250 mg of cyanide to show symptoms as you described. That equal roughly to 6000 apple seeds. Apple can have max 20 seeds in one. So In the best scenario he would need 300 apples to create enough cyanide to poison certain person (with death as a possible outcome if he get the weight wrong).

There is not much to "get" from prison in your given time bracket. Botulism need at least 12 hours to develop. Regular food poisonings (salmonella, rare meat etc) need 24. anything that is widely available is not poisonous because if it's occurrence in the world is common people have natural immune to them. As you build immunology to certain poisons by taking small doses of it.

I knew the Australian funnel-web spiders were bad, but I did not know that their venom acted so fast!

Envenomation symptoms observed following bites by these spiders are very similar. The bite is initially very painful, due to the size of the fangs penetrating the skin.

The onset of severe envenomation can be rapid. In one prospective study, the median time to onset of envenomation was 28 minutes, with only two cases having onset after 2 hours (both had pressure immobilisation bandages applied).

Funnel web males apparently wander around certain times of the year, looking for mates. That is how they run afoul of humans. In your world there is a similar spider (or some other small invertebrate - scorpion might be good) and these things turn up in the prisoner's cell from time to time. Your prisoner knows what they are and after killing a couple, decides to keep one as a pet, feeding it lice from his own body. When the target shows up he surreptitiously flips the creature onto him. The spider seeks refuge in the target's clothes and bites him a minute or two later.

This seems to me more plausible than some ingested poison. If I am an occasional visitor I am not going to have a prisoner make me an omelette or give me a tattoo. I might come close enough to get a spider flicked on me.

If these things live in the prison the guards will probably know what is going on when the target starts gets sick. But an aristocratic target might not deign to tell lowly guards he is feeling poorly, and instead consult with his own entourage or wait to get help from a healer appropriate for his class and station. That would make good narrative, as one of the guards suspects the target has been bitten but then is ignored / dismissed.

Not the answer you're looking for? Browse other questions tagged science-based biology natural-resources or ask your own question.