What kind of animals can be raised like cows?

Looking for animals specifically used for meat. They must be able to be kept in way that that cows can be, That could mean in a pen with corn or in a pasture with just a tall fence.

Edit: I know the question is simple but even deer could feasibly be raised in some way like this, albeit less efficiently. I also left out I would want them to survive in the wild because they are from there (as in not currently domesticated or at least feral).

Just about any docile grazing animal will do.

Everything we have domesticated at this point was indigenous before we started domesticating it, so that constraint of "needs to survive in the wild" doesn't make a whole lot of sense. If you mean something that could survive if its farmer died... Maybe someone could help narrow my list down.

Both were raised in antiquity and mirror cows pretty closely in functionality.

Thanks to John for this one

Sheep have been used as a food source in many cultures historically. As a nice bonus, you also get wool

Llamas are the feistier of the two and both were used more for their "wool" and packing ability, but they could conceivably be used as food sources.

There's no biological law preventing the consumption of horses, donkeys, and oxen. It's just we found they were more useful as beasts of burden because of their strength and stamina.

Exotic, But should work just fine. Probably better for packing through desert climates, but is certainly a viable food source.

These haven't been used historically, but are chill enough to domesticate for meat. The major issue is that their reproductive rate is quite low- about one offspring per two years. Secondary to that is that tapirs are nocturnal and compete for the same food sources as humans. They're more likely to simply be hunted than domesticated, though pet tapirs are not unheard of.

Some non-grazing animals could work as well

Rabbits have been eaten and farmed by many societies throughout history and can even be found in supermarkets today.

They're a little tricky since they're smaller, have more predators, and burrow, but are a viable food source because of their high reproductive rates. Since they're so small, you can have rabbit meat fresh and don't really have to worry about preservation.

Thanks to jamesqf for making a case for including rabbits

Basically the same deal as with rabbits, but indigeneous to South America.

Goats and pigs don't actually graze; they browse. This effectively means you have to actively feed them. I suppose you could also use forest land as well, but that has its own set of problems.

The nice thing about goats is that they eat just about everything, so leftovers and scraps can go to the goats. You also get milk, so they can more functionally mirror cows.

Pigs are not as efficient as you might think and pork is hard to preserve without refrigeration. They're also quite a bit pickier than goats, so you may end up with more waste from their slop feed.

You have to do something about their flying, so you either need to have a lot of land, put them in cages, or clip their wings. Turkeys are the least problematic of the four.

You also get eggs. That's a nice bonus.

Thanks to jamesqf for making a case for including fowl

Since snakes are ectothermic (cold-blooded), their being carnivorous isn't as much of a problem because you don't have to feed them nearly as often. They have pretty large litters as well. I'm unsure about growth logistics and meat efficiency.

The biggest problem is that containment is very difficult (much harder than with rabbits). Fences aren't going to work and walls might still fail to contain them.

Thanks to John for the point on containing snakes

In addition to the aptly named Beefster's excellent list, add:

Although there is little doubt that the domestication of mammals was instrumental for the modernization of human societies, even basic features of the path towards domestication remain largely unresolved for many species. Reindeer are considered to be in the early phase of domestication with wild and domestic herds still coexisting widely across Eurasia. This provides a unique model system for understanding how the early domestication process may have taken place. We analysed mitochondrial sequences and nuclear microsatellites in domestic and wild herds throughout Eurasia to address the origin of reindeer herding and domestication history. Our data demonstrate independent origins of domestic reindeer in Russia and Fennoscandia. This implies that the Saami people of Fennoscandia domesticated their own reindeer independently of the indigenous cultures in western Russia. We also found that augmentation of local reindeer herds by crossing with wild animals has been common. However, some wild reindeer populations have not contributed to the domestic gene pool, suggesting variation in domestication potential among populations. These differences may explain why geographically isolated indigenous groups have been able to make the technological shift from mobile hunting to large-scale reindeer pastoralism independently. (ref) 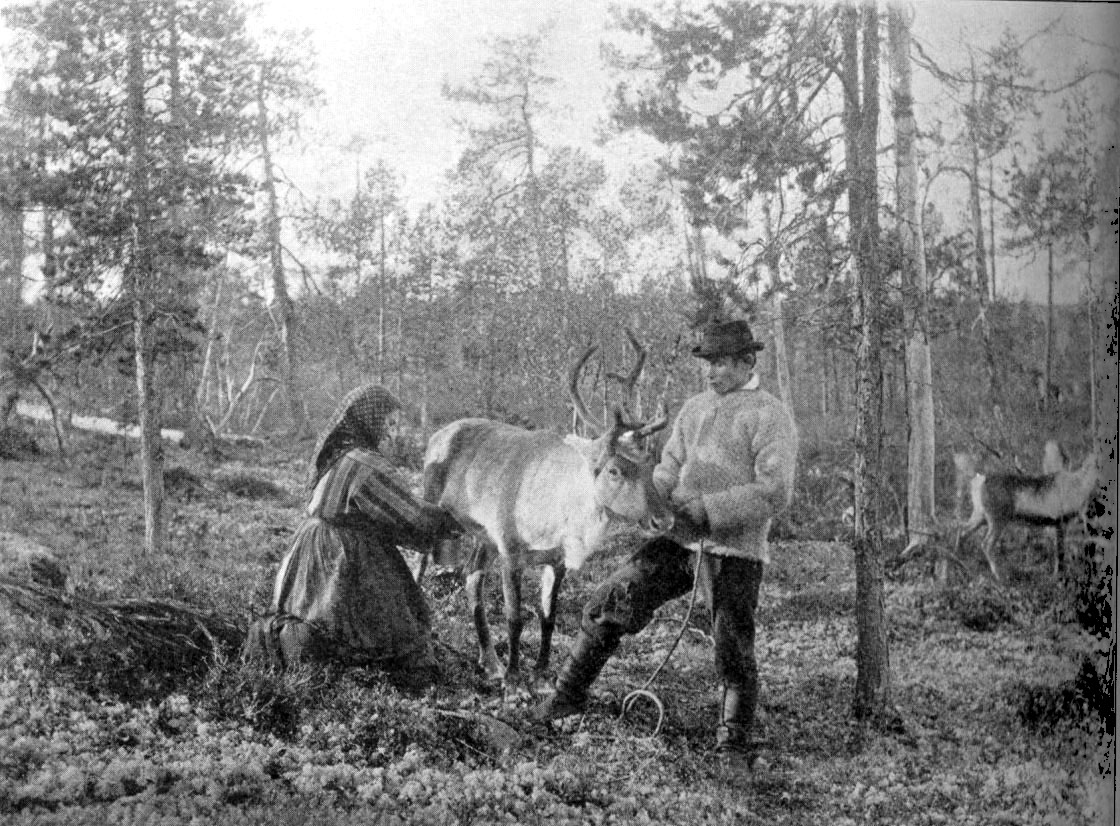 Given temperament and feeding habits, the best animals for domestication have always been herd animals that are herbivores.

They're genetically well disposed towards being kept in groups, and are less likely to see their handlers as a snack than are carnivores.

Of course there are risks with herbivores as well, which will need to be bred out over generations. Wild boar for example are rather aggressive and are as likely to try to kill you than run from you if you encounter them in a forest (especially if they have young). But the fact that we now have domesticated pigs shows it can be done.

Some animals seemingly can never be domesticated. Hippos may be one example (though it may just be nobody's ever tried hard enough, thinking it's not worth the effort to tame those ill tempered behemoths).

Ideally you'd want something that can be kept contained with a relatively easy to build enclosure (another reason why hippos haven't been attempted no doubt, they're rather larger and stronger than pigs and wild cows). So a smallish to medium sized animal, not too much larger than a human, with a gentle temperament, but not too skittish, would be ideal.

Enter the cow, the llama, the pony/horse, some pig species, rabbits, things like that.

I'm keeping this deliberately vague as I don't know your exact setting which may well be on a fantasy world with different species, but the characteristics you select for will be the same.

Carnivorous pack animals could be included that meet roughly the same criteria, but you're going to have more trouble getting them to be docile enough and not turn on their handlers. Think wolves, foxes, mink, ferrets, cats (and yes, all those will at times turn on their handlers if you're not careful, as everyone who owns a cat will know from the scars. Cats can scratch and bite, even when kept as pets though it's often more out of reflex during excited play or when scared than deliberate).

Not the answer you're looking for? Browse other questions tagged domestication livestock .

11
Would dragons using domesticated goat-like animals as a source of food be viable?
10
What land based animals lend themselves to domestication?
4
What animals lend themselves to being ridden by Quadrupeds?
18
What would a society of humanoid carnivores be like?
9
What American animals would have been domesticated had they not gone extinct?
4
What changes to the livestock industry would slowly evolve the animals to become a threat to humanity?
5
What animals would a sedentary centaur civilization domesticate?