In my story idea the main character is given a PCP airgun with a sort of self-charging mechanism in order to commit certain covert operations by assassinating certain individuals. (Don't ask, he was blackmailed into it.)

My question is, what would be a viable mechanism to refill a pre-charged pressurized airgun tank on the fly in combat without having to remove the tank and refill it using an air pump or refilling station?

Keep in mind the tech level of this world is only twenty years from now, so try not to come up with a solution that requires crazy material and tech advancements.

I would prefer the mechanism be as light and compact as possible and make very little noise. I would also like it not to require much effort from the user and the ability to be used when prone.

Note: A PCP airgun is an airgun that uses the pressure of a pre-filled pressurized air tank to propel a projectile. Most PCP tanks have enough air in them for twenty shots. However, I would err on the safe side and have it capable of refilling itself because he constantly on the move and wouldn't always have the time to find a compressed air filling station or break out a hand pump and start cranking. Also PCP tanks are somewhat large so carrying spares is hard. The reason he is using a PCP airgun is because of their low noise, heat signature, and recoil making them perfect for covert operations. 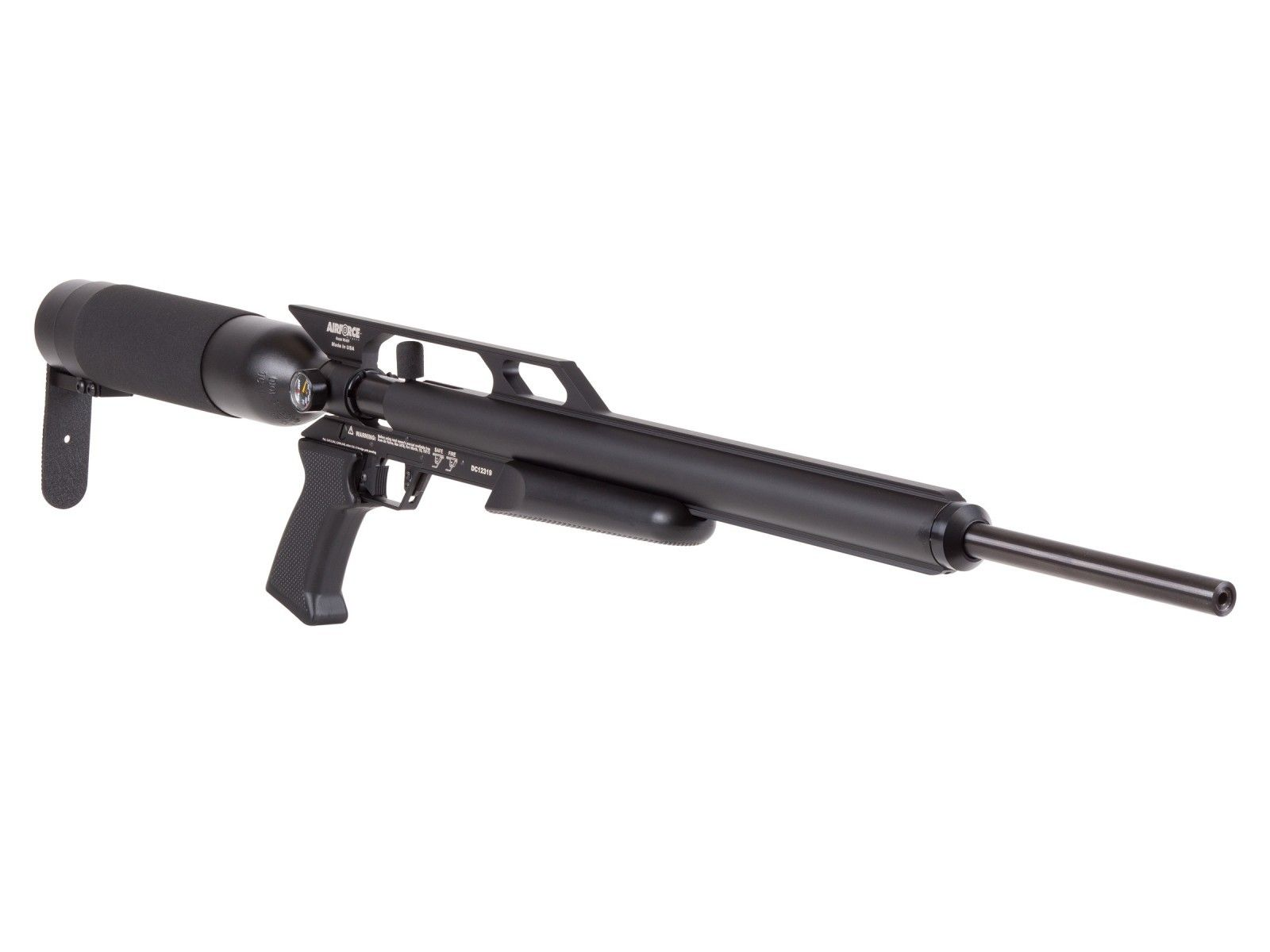 This picture is a picture of one of the more powerful PCP airguns on the market.

Just another side note for clarification: The airgun is designed to be semi-automatic for quick follow-up shots in case the character misses. I forgot to note the working gas being used is pressurized air so that the gun can be refilled using atmospheric air. The chamber pressure is in the range of 4500 to 5000 psi and the refill should preferably be done in under a minute. 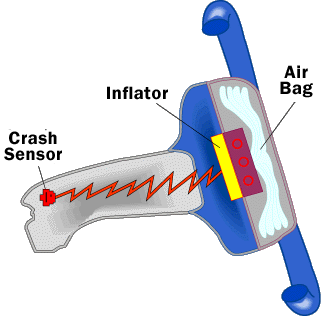 Your ammunition could feature small pellets of this to be inserted into the tank and crushed by a mechanism that would bring the 2 chemicals into contact with each other. Pop the pellet in and twist the crank, closing the tank and crushing the pellet. The tank quickly fills with high-pressure nitrogen. Since the pellet produces many times its own volume in gas, they can be quite small and easily portable.

n is the number of moles,

R is the universal gas constant,

Your V is fixed: the gas canister. You want p to go up inside it.

On the far side of the equation you have 2 variables to work with, as you are unlikely to modify the universal gas constant. You have n and T.

You can work with n and pump in additional moles of gas. Get pumping, Pumpy. Put your back into it.

Or you can work with T and heat it up!. Twist and drop your little thermite cap into your gas reservoir, then close it up. It gets toasty warm really fast, and with rising T and fixed V you get rising P. The thermite caps are calibrated not to kick out so much heat that they explode your pressure chamber. The pressure chamber is insulated so your won't burn yourself carrying your airgun into your pants leg (for stealth, you know).

Don't wait too long before firing. As the reservoir cools, pressure falls and you will need to use another thermite cap.

If you want even more pressure, get some water in there with the thermite. From the same amount of heat energy, the phase change of water from liquid to steam will produce more pressure that you would get just heating air. No, please don't tell me where you got that water.

A small dewar vacuum flask could be used containing liquid air. Modern insulation technology is such that the contents of the flask could be kept at cryogenic temperatures for extended periods using a vacuum between one or more layers in conjunction with heat reflective layers.

Without insulation in the guns tank the liquid air would rapidly absorb heat from the tank walls and surrounding atmosphere and boil into a high pressure gas recharging the gun. If necessary a small battery could be included in the recharge device and a fixed coil in the guns tank. Once the liquid was transferred the battery could be shorted across the coil in the tank to add heat quickly to aid rapid boiling.

As suggested in another answer. combustion is one approach. Another is to exploit the principle of vapor pressure.

Thermoelectric generators are usually used to force a cooling action (they're found in computers for that very purpose). But like all generators, they can can be used in reverse to generate electricity when one side is exposed to heat and the other to cold.

They're not especially efficient, but let's make the trigger grip and barrel grip out of thermoelectric material, and hook those generators up to an air compressor. As long as you're running on adrenaline, the heat from your hands would be high enough against the cold interior of your gun to keep the compressor running, which would refill the canister.

Given the formula here

DISCLAIMER: I haven't checked this. I could be crazy wrong; I haven't played with the ideal gas law since school and that was quite a few years ago now ;-)

$n$ is about 13.39, $R$ is about 8.3145, $T$ is about 290 and $ln(300/1)$ is 5.7, so in a perfect world you end up needing about 185 kilojoules to compress your gas bottle. With a 100W power supply, this will take 3 minutes. A modern day lithium power pack that can deliver this much power for a little under and hour weighs under a kilo, charges in two hours and costs a few hundred dollars. In the real world of course, you'll need a more oomph than that, inefficiencies being a thing, but I'm guessing I'm at least within an order of magnitude, and tech improvements over the next two decades will hopefully cover up my assumptions, perhaps even to the point of a suitable supply being pocketable.

Now all that remains is the compressor. Mini PCP compressors do exist now... they're not silent, but that's at least partially a feature of the target market (which isn't willing to pay silly money for quieter things) but your setting makes it seem like budget is less of an issue. Similarly, they're currently backpack sized (and about 10-15kg, but they're not optimised for lightness), but with a decent budget and 20 years of engineering and technology improvements... well, it might not be pocket-sized, but it'll be close enough.

I am a fan of the idea of using a high-vapor-pressure liquid to maintain constant pressure, but as noted in comments that doesn't actually qualify as "refilling" or "recharging"--just increasing the capacity to reduce the need for recharging.

It would therefore seem obvious that what you need is some kind of built-in pump--or multiple kinds of built-in pump. For that, I first recommend taking inspiration from the variety of spanning methods used to store mechanical energy in crossbows. One could, for example, have a lever-action pump where the lever and working cylinder are typically stored folded up in line with the barrel, but which can be pulled out and... well, pumped manually in the manner of, e.g., a goat's foot spanning lever. Another option would be to use something more like a windlass--a crank that can be stored folded along the barrel, but which can be quickly flipped out and hand-cranked to power a built-in rotary or reciprocating pump.

That'll give you reasonably rapid recharges for a small number of shots at a time, but admittedly doesn't quite count as "self-charging", as it still requires manual intervention even if it doesn't require removing the gas cylinder. However, I still recommend having one of those methods available in addition to a truly self-charging system, as any truly self-charging systems will necessarily be quite slow, being limited to capturing small amounts of power from vibration or temperature variation as the weapon is moved around in normal use. To take advantage of vibration and changes of position, you can simply use a free-sliding piston in a sealed cylinder to produce small quantities of lightly-pressurized air as the piston drops towards one or the other end of the cylinder (compressing the air in the lower end) as the weapon is moved around. The resulting stream of mildly-pressurized air (with infeed pressure limited by the weight of the piston, and thus indirectly by the total acceptable weight for the weapon) can then be fed through a pressure amplifier to charge the main tank. This incidentally also provides an easily-accessible manual charging method--just shake the gun vigorously back and forth!

Finally, one could use a simple thin cylinder with one-way check valves at each end attached to radiator vanes to ensure that the small quantity of air in the cylinder is always able to rapidly come to thermal equilibrium with the surroundings. As the air in the cylinder heats up, it will expand, and be forced through one of the check valves; this provides a low-pressure infeed stream that can be fed through a pressure amplifier t feed the main tank as above. When it cools, new external air will be drawn into the cylinder through the check valve at the other end. This would allow for some small amount of passive charging while the weapon is in storage, or at least not being carried.

You say carrying a lot of spare tanks is too cumbersome, but would it be doable to just carry one? This might not be actually possible (I'm no engineer), but I envision rigging the tank with some little mechanism so that when you removed it from the gun, it quietly began sucking in air and refilling itself. Stick it in your backpack and ignore it for a few minutes, and you have yourself a ready reload. Just keep swapping between your two tanks as necessary. If you say the tank refills itself like this, the audience likely won't question it, because it seems plausible enough, even if detailed research and design concepts were to show it was practically impossible.

Of course, the downside of this would be that if your tank takes 5 minutes to refill, and you've used up your forty shots from both tanks in less than two minutes, then you're stuck. But if you're stealthily assassinating a single target at a time, hopefully this won't happen?

Not the answer you're looking for? Browse other questions tagged technology weapons stealth .

3
Compression Rifle Designs for Combat Use

14
How big should a terrarium be to be self-sustained?
6
How can self-replicating machines collect and sort raw material?
32
Long-lasting self-sustainable presence indicator beacon
1
Why make androids self aware?
7
Is a self contained air-bullet cartridge feasible?
3
What would be the best Tauren equipment to maximize it's charging abilities?