The goal is to implement a bronze age version of blockchain in ancient Egypt to introduce a layer of security for the royal tombs.

Tomb raiding was rampant, and at times even the legitimate successor would loot his own predecessor's tomb. Family looting aside, there were punishments for thieves who were caught looting. However, historical records seem to suggest there was ample opportunity for even non-royals to work the system:

After some days, the district officers of Thebes heard that we had been robbing in the west and they arrested me and imprisoned me in the office of the mayor of Thebes. I took the twenty deben of gold that represented my share and I gave them to Khaemope, the district scribe of the landing quay of Thebes. He released me and I rejoined my colleagues and they compensated me with a share again. And so I got into the habit of robbing the tombs. -- Amenpanufer (11th century BC self acclaimed tomb raider)

While building tombs underground so they didn't stick out like sore thumbs did help, archaeological evidence suggests that physical security mostly just amounted to obstacles and heavy objects. This means that the stereotypical "booby-traps" were not historically accurate. Playing devil's advocate, even if they were used, the dilemma would be largely unchanged. The builders/workers would still know how to defeat them. As many great Egyptian tombs had entire towns of workers who lived nearby, this creates many potential points of failure into the "trust" system.

Our 21st century implementation of blockchain is a digital distributed ledger that has redundancy across many servers, making it hard to retroactively alter the data. I concede, given only bronze age technology, we lose important elements of blockchain such as electricity. Nonetheless, in principle, I'd like to explore further if it could be done. Given that the Egyptians had the potential for cryptography by virtue of the written word, and let's not forget they had the skill, organization, and knowledge to create massive and challenging projects like the pyramids. While blockchain in antiquity might seem outlandish, I personally believe we should not underestimate ancient Egyptians' competency. Assuming they have the resolve and expertise, the question becomes, is it possible in the first place?

Instead of a digital ledger where all transactions are recorded, perhaps a physical one could have a very similar effect. Of course it would be slower, since we are writing entries by hand. Still, perhaps a distributed array of giant monoliths could improve the security situation for royal tombs.

What should be recorded on these distributed monoliths to best deter the workers from leaking the design secrets and contents of the tomb, as well as deterring corruption and taking bribes as Amenpanufer alludes to?

I had some extra time on my hands. Here is some concept art: 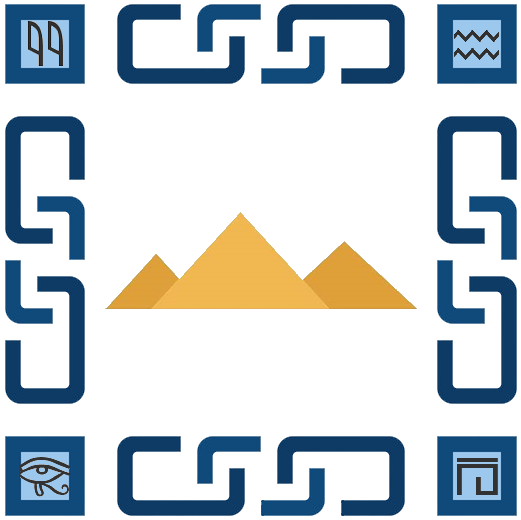 The purpose of blockchain technology is to create records which are hard to alter. That is very useful when other records are objects of value, like bitcoins or stocks, but it is less relevant when the objects of value are physical.

Imagine you own a golden wedding ring. You make an unalterable record that you own the ring. Then a thief takes the ring and sells it to a fence. The fence sells it to a crooked goldsmith who melts it down to create a pair of cufflinks. What good does the record do?

There is some information that might help to deter tomb robbers.

Every couple of years, the priests must lead a blindfolded accountant to each tomb. Assume that this accountant cannot be bribed.

Three problems with that.

The solution is that each secret is known to several priests and each priest knows many secrets.

The secrets are secret, the management of the secrets is public and must be protected against alterations.

We need papyrus money for this. Pharaoh has giant stone monuments built ( so far apart they cannot sequentially be reached within a year) with patterns inscribed in a weather-safe place. Annually they get daubed in gold-ink, and transfer-prints are made from all monuments, the prints then sent to the next monument, for printing next year, in sequence. The prints specify which part of the next pattern to use. After the last print, those papyry are now money. To transfer money, you give the money to the one you are paying, sealing it with your personal seal and a handprint.

Before the printing ceremony, all current money is proved against one monument the current holder can choose at random. Should the prints not match, all sealers on that money are executed. The pattern is big, and only a small part of it is used each year, with input: last printed pattern, and days since last shooting star in a specific part of the sky (denoted by monument itself). This means a forger cannot pre-print money. Post-printing is only possible using the original monuments (natural patterns in the stone), and security there is organized by all the anxious people who'd like to seal in the future - distributed.

This resembles blockchain in that it is only really transparent to a few priests, the burden of upkeep burns an increasing lot of ressources, and the security hinges on technology never reaching certain levels.

Not the answer you're looking for? Browse other questions tagged science-based technology security bronze-age .

31
Long-abandoned, yet still working ancient technology
9
The Rollercoasters of Ancient Egypt
104
Would relatively primitive people really confuse technology with magic?
71
What modern technology would be most revolutionary to ancient Greeks?
2
Effects of Homeopathy on technology in the Bronze Age
8
What kind of specialists would study ancient alien technology?
4
Modern technology in an ancient China-like world
24
How long would it take to dig a 10 km canal with Bronze Age technology?
7
Ancient 3D Printing