Will winds always be the same? 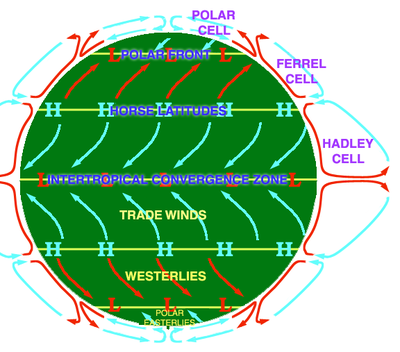 Would the above diagram apply to pretty much any planet in terms of prevailing wind direction?

Correct me if I'm wrong, but as I understand it, if the planet rotated westward rather than eastward, the direction would be flipped because of the different Coriolis effect. Also, a higher speed of rotation would increase the Coriolis force (hence Jupiter's centuries-lasting storms), but that wouldn't change the direction of the winds to my knowledge.

No, wind patterns are not always going to be the same. 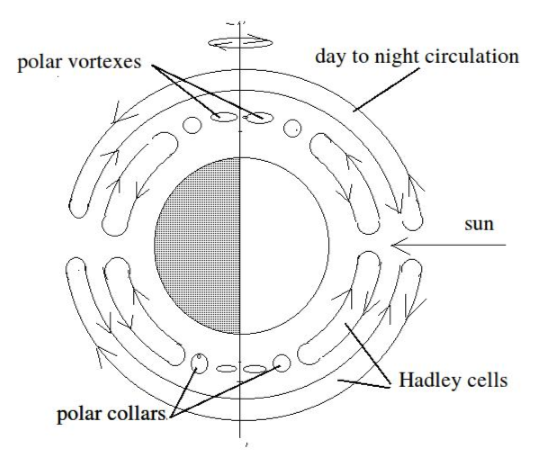 The key point here is that there's no change in the direction of circulation on Venus at middle latitudes - like the Ferrel cells you note. Instead, in each hemisphere, there's uniform circulation until you get the poles, where you find cooler winds, just like on Earth. Polar vortices can be found here.

There are a couple other peculiarities about the atmosphere of Venus that I should mention:

This last point is actually really important, and does contribute to wind direction.

Insofar as we have data, you are correct, but...

If the only thing you're considering is the planet and nothing else, then you are correct. All planets will experience fundamentally identical behavior (winds moving with the direction of rotation), differing only in the details (where the pressure zones are, wind force, etc.).

If you spin the planet fast enough, I can imagine some of those rules shifting. Yes, the wind will still move generally in the direction of rotation, but ultra high rotation would begin to overcome the longitudinal wind cycles.

The rules would change even more in a binary (or more) star system where heat is applied in a much more complex manner than here on Earth.

And they'd change even more for a tidally-locked planet where the rotation might not be enough to overcome cycles over the light terminator at all. This is the case where better analysis than I can provide would be hugely interesting, because you may see no rotational effects of the wind. (A tidally-locked planet does rotate: once per orbit.)

I also don't want to rule out the axial tilt. Uranus' axial tilt (about 98°) would suggest the possibility of some wild wind changes through the course of a year. However, Uranus is so far away from the sun that images clearly show a rotational wind pattern. But if Uranus were in Earth's orbit such that annual heating (somtimes polar, sometimes equatorial) could seriously affect the winds... and if uranus were Earth-sized such that gravity had less hold for the sake of rotational patterns... that could be a fascinating analysis. 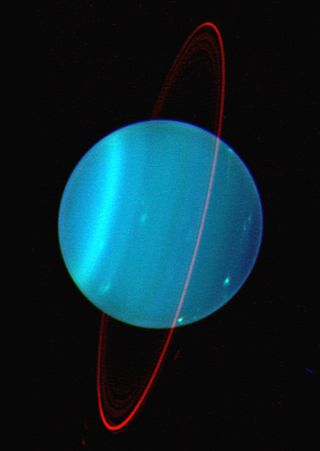 I also suspect that if Mercury had enough mass to host a thicker atmosphere that the heat from the sun would disrupt rotational patterns on the sun-side, but they'd reassert on the night-side. That would cause huge circum-terminator cycles. Cool.

The problem is low data

The universe is constantly surprising us. We're finding planets in orbits that not too ago we thought impossible. We're discovering star and galactic formations that reveal the wonderful complexity of what we call home. When it comes to wind patterns, we have basically nine datapoints all within a single stellar configuration. Any statistician worth his salt would tell you that's a sample too small to make universal (literally) assumptions.

But I think there's enough flexibility in what we do know to rationalize a story with a planet hosting non-terrestrial wind patterns.

Not the answer you're looking for? Browse other questions tagged planets geography atmosphere or ask your own question.

6
Effect of slow rotation on winds

50
How would winds behave on a tidally locked planet?
7
Will moons orbiting gas giants always be tidally locked?
24
What effect would liquid sulfur oceans, sulfur dioxide in the atmosphere have on visibility, sound propagation and other environmental information?
4
What vegetation/biome could I expect in a tropical region at an average temperature of 8-9 degrees Celsius?
11
Determining climate and biomes in a non-planetary setting
15
Prevailing winds on a rotating space habitat
10
Will people suffer from the same diseases on other planets?
6
Effect of slow rotation on winds
7
Does this model of atmosphere sounds plausible enough?
3
Help with Pressure, Winds, Precipitation and Climate Zone