What's the minimum time that it would take for an advanced species to create an ecumenopolis?

In figuring out the rough timeline for my sci-fi, I've run into an interesting dilemma. As it stands right now, There are about 90 years in between one of my civilizations discovering space travel and them building an empire spanning several dozen planets and two or three hundred star systems in their neighborhood of the galaxy. Now, with the level of technology that they start with, I'm not too worried about their ability to reach and establish outposts and industry on these planets. The problem comes when I look at the list of three or four city-planets in the new empire.

So, to the main issue in this question. Assuming that establishing the colony is easy enough and no diseases or natural disasters wreck the population, how long would it take for a colony of sentients with human-like lifespans and reproductive cycles to turn an Earth-like planet into an ecumenopolis?

The empire in question starts with a planet with a population of about 20 trillion.

The empire in question starts its expansion with conquest and federation, adding 4 other developed planets and 1 ecumenopolis with 120 trillion inhabitants in the ten years after gaining space-faring status. The inhabitants of these other planets are of different species. They can still be used for colonization purposes, though they would not be the preferred type.

Cloning technology is available but seen as immoral by the empire.

Don't depopulate the starting planets by more than 10% of their populations.

Minimum population density for me to consider it an ecumenopolis is 2000 people per square mile.

Let me know if any other details are needed. 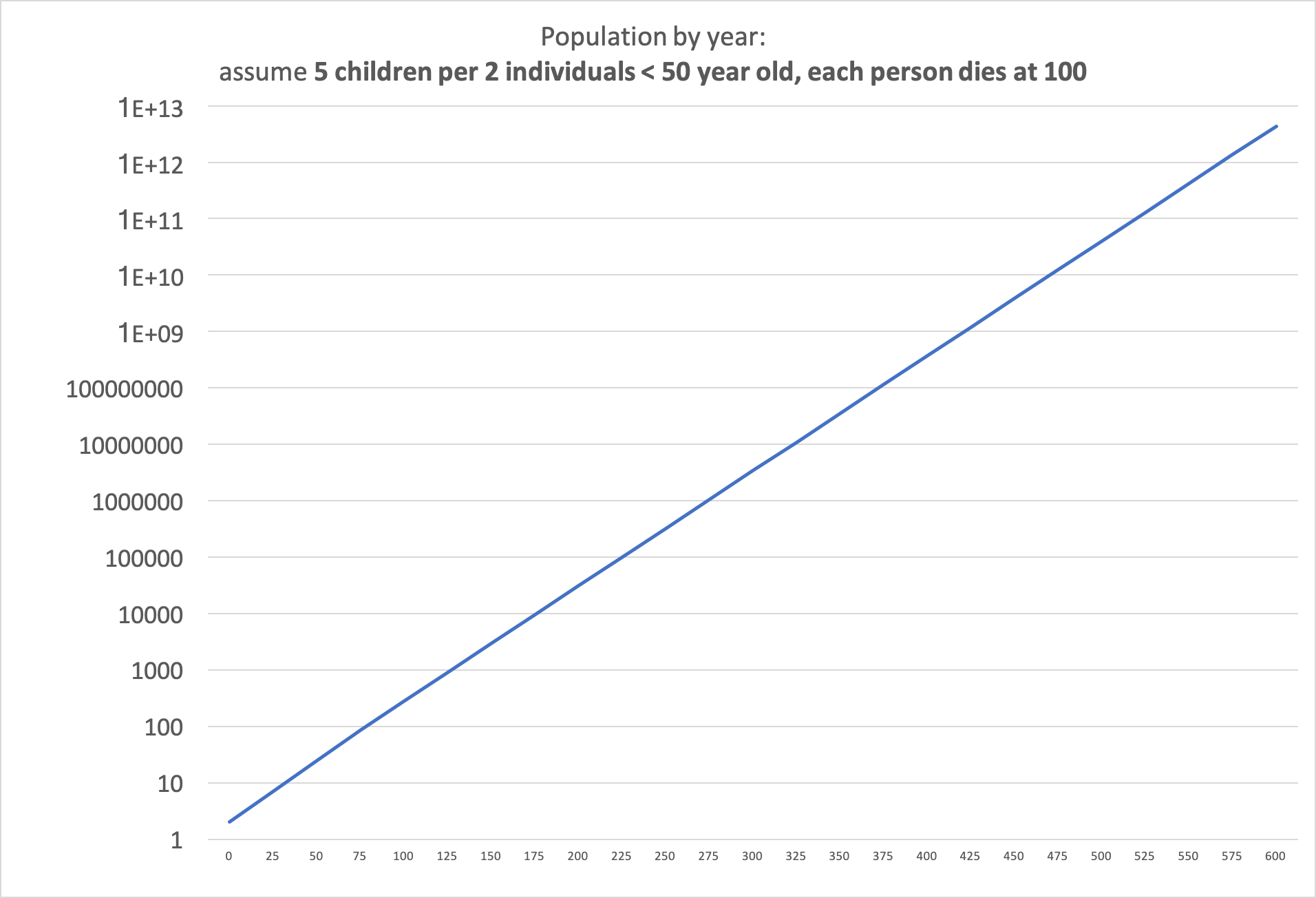 Without limitations on population growth like disease, food or space, this is going to be the same sort of curve regardless of your starting assumptions. In this curve I started with 2 individuals, assumed 5 offspring per 25 years for each 2 individuals < 50 years old, each person dies at 100.

With FTL space travel, more and more people will move offworld where they don't have to compete for homes, jobs and resources. Orbital habitats and colony worlds offer cheap land where you can raise your family as well as easy to find work and other opportunities.

Any growth in the population needs to be put against migration outwards. Population increases where there is no ability to expand outwards.

Not the answer you're looking for? Browse other questions tagged planets science-fiction population .

29
Is it plausible that humanity goes extinct due to not making enough children? If not, what would make it more plausible?
7
What would the average tech level be for the common folk in a space empire?
0
How close can two Earths be without becoming tidal locked?
1
How much will this civ expand?
6
Minimum Population For a High Tech Society?
8
Ensuring genetic diversity in a small colony, by using artificial insemination?
9
What would be the an avarage and/or realistic population density be for an medieval based city?
1
Is it feasible to have enormous boarding schools to educate a world empire's children?