I'm playing around with the idea of making a world heavily based on one of my favorite childhood book series. (basically a fanmade rewrite of sorts). The series is called Warriors, and is about talking cats. I’m rewriting the worldbuilding and story for fun so that the cats are bipedal and more civilized.

They'd be omnivorous felines with a preference for meat, and their heights would range from 2’6” to 3’8”. The civilization would be similar to the late 17th/early 18th century.

I was wondering how their farming and husbandry would work. I know they would have chickens, and pigs & ferrets are a maybe, but what else do you think they would domesticate? They live in a mostly forested land, but there would be plains, wetlands, and mountains in certain areas. TL;DR, what sort of animals would a civilization of small feline omnivore humanoids domesticate? (Bonus points if you address whether they could realistically have pigs and or ferrets)

Welcome, and good first question as far as I'm concerned :)

Depending on how cat-like your critters are going to be they may well have an easier time domesticating animals than humans. Cats are the hosts for a very interesting parasite called Toxoplasma gondii. It spreads in cat faeces and infects other warm-blooded animals via accidental ingestion (say, from unwashed vegetables or handling cat litter). It then alters the behaviour of its new hosts to lose fear of cats and prefer their smell over other animals. Evidence is strong that this occurs in rodents, and there is also evidence that it occurs in people too (read it in New Scientist but can't find the source now!).

Excuse the French, but bloody terrifying if you think about it.

However, for your cat-critters it means that they already have an 'in' with other warm-blooded animals that would otherwise be very wary of mesocarnivorous intelligent cats.

Seeing as the effect has been observed most strongly in rodents, I'd suggest that the initial domesticated livestock would probably be large rats of some sort. Larger varieties would be an equivalent relative size to chickens for people, and could be bred to be larger. Rats are also able to eat a wide variety of foods, so will assist your mesocarnivores by allowing them to exploit resources they couldn't otherwise.

Rat's milk is significantly higher in protein and fat than cow's milk, and lower in lactose. I expect your cats would evolve a degree of lactose tolerance to allow exploitation of this resource (although likely less than current Europeans as they have to deal with lower concentrations).

If the effect is also pronounced in all rodents, there are some larger varieties like capybara that might end up filling the niche of larger livestock. Another option would be rabbits as they are both social and grazers (allowing your cats to exploit grasslands).

It's unlikely that they will domesticate pigs. Pigs are dangerous creatures, and the size differential between them and your cats would put them well into 'very dangerous'. Cattle are also likely too large to effectively domesticate. Goats are probably in though.

Another niche that domesticated animals fill is as hunting partners (filled largely by dogs with us, but also using a variety of other animals). What would help here is to identify your cats' hunting style.

If they're persistence predators then they will likely gravitate towards other persistence predators as we have. Wolves would probably be very risky due to their size, but there are other, smaller canids that could fill the same niche. African wild dogs weigh 25-30kg on average so may be within the size range to be domesticated (although certainly towards the upper end of that). They would, however, be very useful in allowing your cat-people to more easily target big game (for them). Other small canids are not usually social, which poses a difficulty for domestication.

If they're primarily hunting rats and rabbits though, then ferrets are ideal. They can weasel their way into their burrows and flush them out for your cats to catch, much as we do today! They're also definitely within the size-range for domestication.

If you want something a little more exotic, then just maybe they could look at ethiopian wolves. They're about the same weight as african wild dogs so probably on the upper end of domesticability for a predator. However, they are specialised small-animal feeders. If your cats are also small-animal feeders then they could provide assistance, and they are probably less likely to be predators of your cats.

I'm going to assume here that your cats have hip and leg anatomy that allows them to comfortably sit on a mount. Humans have adaptations for sitting that even other hominids lacked (neanderthals appear to have been adapted for squatting to rest, and lack as padded backsides and H. sapiens do).

With that said, the smaller size of your cats does open things up a little when it comes to riding things. Where humans have comparatively few animals that can bear our weight (that we didn't hunt to extinction first), the majority of ungulates are probably big enough to carry your sub-4ft cats. Pick one that's not too big and not too small, preferably a grazer rather than a picky browser and has a gait that doesn't look too painful to be sitting on the back of and you're away!

Oh, and remember. No predators as mounts. For many, many reasons it doesn't work.

Another very useful task that could be performed by animals is that of sentries. Humans use a variety of domesticated, semi-domesticated and wild animals for this purpose. Dogs are used to warn farmers of predators attacking their flocks. Prior to their demonisation by Christianity, magpies were semi-domesticated in Europe and used to warn of animals approaching people's crops as well as flocks.

As your cats are rather small, they will likely be more vulnerable to predators than humans. As such, domesticating animals like crows to act as sentries would probably provide them with a very useful service. Crows would be especially likely as they can be taught behaviours over very short time periods, and also are also able to teach those behaviours to other crows.

Warning: if you want to waste a few hours, google up Cats and Goats. Who knew? But it seemed reasonable to me and it is. Reasons.

1: Goats don't eat what cats eat, so they don't compete.

If the cats are omnivorous then most animals domesticated by humans would also be useful, I would have thought. Omnivorous implies agriculture, which implies both beasts of burden - animals like horses are too big for the cats to ride, but they're useful as draft animals - and the need to defend homesteads (dogs). Hunting beasts such as ferrets and dogs are still beneficial.

Cats can't fly, so bird species domesticated for use as messengers would also be useful. I assume the cats are intelligent enough not to just eat them. 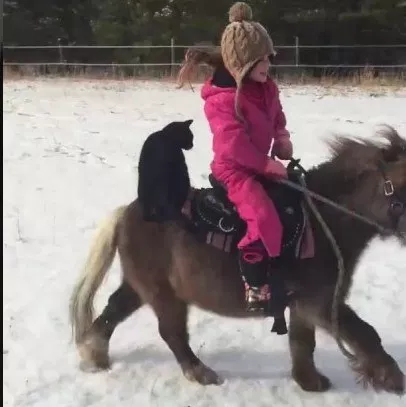 Pigeons. Because they are smaller than chickens and have a history of domestication, they would work better than chickens for your cats. They would provide meat and eats and can be trained to perform some tasks, like carry messages.

Not the answer you're looking for? Browse other questions tagged biology fauna food agriculture .

22
Would it be feasible to have a wolf as a mount?

3
What tiny animals pose a threat to the survival of microscopic humanoids? (Series)
9
What American animals would have been domesticated had they not gone extinct?
0
What sort of animals would inhabit my world?
2
What would human characters eat in a world with no animals
26
What sort of beak would a bone marrow eating bird have?
5
How would you design a race of small humanoids such that they could ride a Quetzalcoatlus?