What is the science of fairy flight?

Assume these homo super-dwarf aka fairy and homo sapiens come from a common ancestor, and somehow they evolved a pair of wings and can do vertical takeoff.

The average adult is approximately the size of a tennis ball and weights around 58g, they are mammal by the way so how can they hover at the same flower for up to thirty minutes?

I think they belong to specie Homo genus Nimis Parvus....

They are a branch of the homo tree, but they ended up on a converging path together with bats.

Actually, there are bats which are known for eating nectar from flowers, for which hovering is a necessary ability.

Your specimens grew a membrane between their arms and body, exactly like bats did, and use it as wings.

Fairies could develop flight along similar lines to bats. They would evolve patagia (membranous skin) stretched from their arms to their sides and use these as "parachutes", slowing their fall as they jumped from trees. Eventually, they'd learn to flap and cover distance as they fell, until they ended up with the ability of powered flight. 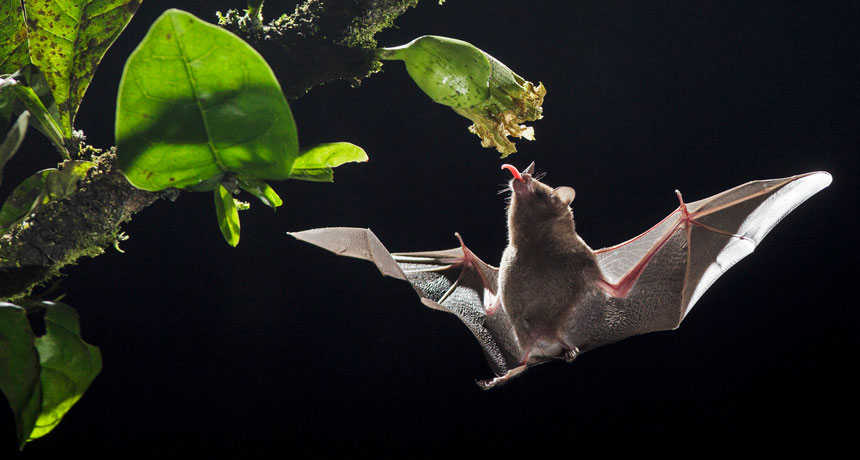 Keeping with the bat idea, there are hovering bats - they're called nectar bats, genus Lonchophylla, and there are 8 species. They do this by continually twisting their wings backward as they bring them up, keeping a constant flow of air downward to keep them in place. Them and hummingbirds are the only vertebrates which can perform hovering.

Now, normally, a 58-gram placental mammal would only need to consume about 47 kilocalories a day, according to my calculations. However, hovering flight is so energy-expensive that - based on hummingbirds - your fairies would have to eat more like 85 kilocalories a day. The main consequence of this is that they probably wouldn't be able to fuel an intelligent brain.

To summarize; your fairies would probably look a lot like fruit bats more than anything else, and they probably wouldn't be as intelligent as humans. Maybe crow-level intelligence, tops. Hope this answers your question satisfactorily.

Not the answer you're looking for? Browse other questions tagged biology creature-design evolution mythical-creatures flight or ask your own question.

8
What does the anatomy of a fairy (10-20 inches tall, flying humanoid being) look like, as evolved from a regular human being?

4
Sympathetic links with flight
18
Science behind a naturally invisible creature
2
Kuehneosauridae and powered flight?
10
Flight at supersonic speeds without an airplane
9
The Science of the Marsupilami
6
What would the changes necessary for powered flight using rib-derived “wings” look like?
2
Quadrupedal Flight
6
Bee-like vertebrate flight surface