How can I make a dense asteroid field?

Okay, so I'm working on a novel and I'd like to have a dense asteroid field, something akin to the old ESB Hoth field, though it doesn't need to match that exactly. The notion is there is an advanced civilization going into such a dense field to pull out desirable mine-able ores. I'm looking for a plausible explanation for how such a field could form, and persist for at least around 100 years.

So my rough parameters for such a field:

I was thinking something like a collision of dwarf planets or possibly small moons would create such a field, on a short time frame at least. Eventually, I would assume either form a ring, collapse into a moon, or dissipate entirely, but for a while it would be a dense area of debris that would be hazardous to navigate.

So would that be a plausible explanation, or can anyone suggest a way for such a dense asteroid field to exist, even if only for a limited time. Thanks!

Update/Clarification #1: First thanks for the answers so far.

Okay, I can see there being a bit of confusion here. What I'm looking for is a plausible explanation for a dense asteroid field similar to the one seen in the escape from Hoth in Empire Strikes Back. It need not be a long lived phenomenon in astronomical terms ( ie 10-100 years is good ), but would need to exist in such a condition for at least 10 years. It also doesn't need to be huge in terms of area, so something like a few thousand kilometers is fine, but with a minimal size of 10km in height / width / depth. The means of creating such a field can be natural or artificial. In the end I'm looking for a dense Asteroid field for use in a rough and tumble flight scene. Of course, if that is not possible, I can figure out some way to recreate the scene. 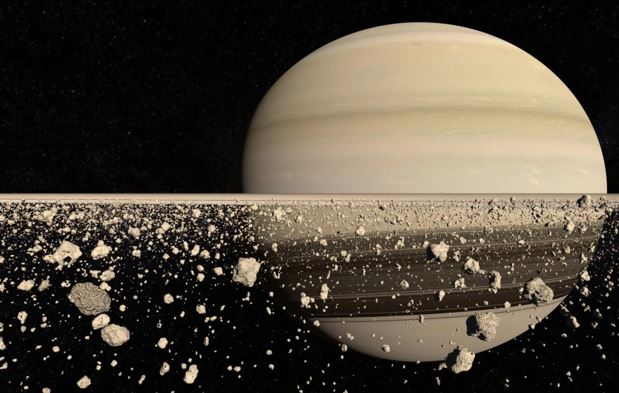 So if a gas giant large enough to have a large Roche limit radius, and one of its major moons fell inside such limit due to some reason like orbital perturbation or decay, it would disintegrate due to the main body's tidal forces, and the resulting ring system would be both thick enough for your average sci-fi asteroid thicket, and stable enough to last for GEOLOGICAL timescales--Saturn's ring is believed to have existed for more than 100 million years.

This is a much hotter and more action packed asteroid field than the duddy old Kuiper belt or some ice collection ring. Good heavy globs of metal will be floating around, glowing hot. Plus when you make it there is the bonus sound, like millions of voices suddenly cried out in terror and were suddenly silenced.

A widely accepted theory of planetary formation called the nebular hypothesis states that during a star's first 100,000 years or so, the surrounding dust compresses into a disk and starts accumulating into clumps. Once these planetesimals grow to a few kilometers, they start directly gravitating together instead of just bumping into each other. As larger proto-planets form, lots of the planetesimals get ejected from the system.

A young star system transitioning from planetesimals to proto-planets would be the absolutely ideal place for interstellar mining. For thousands of years, all of the orbiting mass of the system would be in nice, soft, bite-sized pieces, and before much of it is lost to deep space. It would be at the tipping point between large, quick hauls and minimal gravity wells to escape.

Such a chaotic landscape would be highly varied; some areas could be more safely exploited, while some particularly dense regions would appeal to daredevil miners willing to take risks for a big payout.

If you have interstellar travel, proto-planetary disks are where you go to mine. They also happen to be the best place to find tons of cool rock chunks slamming into each other.

Beware of tightly packed asteroid belts, especially if they're mineral rich and safely floating by your home world's orbit within easy reach. They are traps! Lures to tempt you up into the darkness where your technology is more easily measured and threat assessed.

The Old Ones, who rule the inner spirals of our galaxy, know that we are out here. They know that intelligent life is the natural goal of the universe and that it erupts practically everywhere beyond their jealously guarded domain. They know that inevitably a greater intelligence will rise to threaten them. It is only the when and from where that is in question. The certainty that it will be is absolutely certain.

But as others here have explained, space is big and mostly empty. It is beyond even their vast power to monitor all that is. Deep time and deep space shroud us from their view. The fraction of a million years needed to rise from the caves to the stars is a blink compared to the galactic expanse which must be watched. From their point of view, the forest is too large and the prey too few.

So like any good hunter, the Old Ones lay traps full of tempting morsels.

It is child's play for them to cherry pick each solar system's oort cloud and assemble a mineral treasure trove as bait. Then with only a small exertion in stellar engineering, they set it all in motion. Through their design, the field can orbit the system's primary temptingly close to the potentially fertile worlds yet distant enough that those worlds' gravity wells neither disrupt nor steal from the asteroid field. The trap can then remain stable for the life of it's sun, serving as a lure to any star faring race which might rise from or even just visit the system's planets.

And deep in the heart of that treasure trove, on an asteroid which is obviously richer than all of the others combined, the trigger awaits to be sprung...

When the first gram of its riches are removed, the system's sun goes supernova... eliminating another threat to the Old One's rule.

The Oort cloud could / would have as dense an asteroid belt as you want or as rich. Since not much is known about the Oort cloud currently you could hand waive a lot to fit your requirements.

The Oort cloud would be large enough to warrant the construction and maintenance of a processing facility (close to the sun maybe to use solar energy for refinement of ore).

As for collisions, I was told once (no actual proof behind it sorry) that some of the comets that come into the solar system were caused by collisions in the Oort cloud.

Not the answer you're looking for? Browse other questions tagged science-fiction space-travel asteroids .

2
Asteroid making a hole through the crust
4
Would a sun-blocking asteriod field be created if something big was to smash into the moon?
4
VERY dense asteroid belt - possible?
2
How to explain the presence of a dense debris field around Earth?
5
"Landing" a small asteroid on Earth
2
High-Altitude Asteroid Impact
0
How much colder would that asteroid make my planet?
11
Plausible Reason for Asteroids Being Close Together
21
Can an asteroid go through the sun?