The Triceratons are a imperialistic race of, well, space triceratops' from TMNT (Teenage Mutant Ninja Turtles). From what I can gather they breathe nitrogen and judging by their build come from a high gravity world. 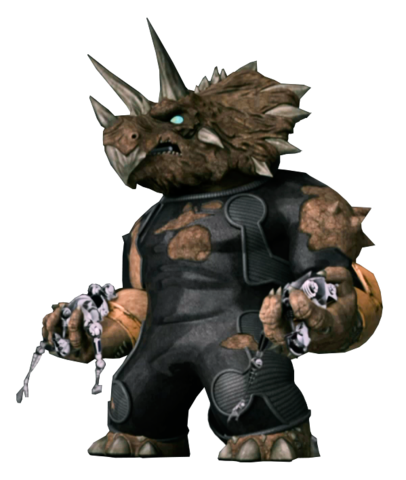 What could cause a triceratops like life form to evolve to be both bipedal and have prehensile hands?

Note: The image and nitrogen bit is from the 2012 show.

To take a bipedal form there are any number of explanations, although a high gravity world does make it less likely and their form does not look well suited to living in trees.

Perhaps they lived in prairies or other areas but with large amounts of vegetation, lifting up on their hind legs allowed them to see over the vegetation or reach hanging fruit and over time they got better and better at it. Essentially giraffes but evolving bipedalism rather than a longer neck. The fruit idea would also explain the evolution of grasping hands in order to pick the fruit, especially if the fruit came with a shell or rind that needed to be breached or manipulated in some way.

Breathing nitrogen is harder though. If the world has a suitable atmosphere then life will find a way to work with it but nitrogen is similar to CO2 in that it is more likely to be what they breathe out than breathe in.

Most likely their atmosphere is rich in some nitrogen compounds, they breathe those in and convert them to energy then expel the nitrogen. Some other creature (equivalent to plants) would then turn that nitrogen back into the compounds allowing the cycle to continue.

As John pointed out from wikipedia:

Many industrially important compounds, such as ammonia, nitric acid, organic nitrates (propellants and explosives), and cyanides, contain nitrogen. The extremely strong triple bond in elemental nitrogen (N≡N), the second strongest bond in any diatomic molecule after carbon monoxide (CO),[2] dominates nitrogen chemistry. This causes difficulty for both organisms and industry in converting N2 into useful compounds, but at the same time means that burning, exploding, or decomposing nitrogen compounds to form nitrogen gas releases large amounts of often useful energy.

Not the answer you're looking for? Browse other questions tagged creature-design anatomy .