Plausibility of the government creating a secret military research town?

The country is in a Cold War. Let’s say you, a government military official, wants to create a biological super weapon away from the prying eyes of those who think humans have natural rights. My question is, could the military plausibly create an entire town, for the creation of a super weapon, without their secret getting out?

The US government built entire towns when developing the atom bomb. See these references for more:

Yes, it's just a matter of how much effort the government is willing to make.

The Soviet Union had many secret research cities.

These were denominated as secret cities, places where the most advanced industries developed and they did not appear on the map of the USSR, because they wanted to hide from the world and the American enemy the military and technological advancements of the nation.

In response to the immense challenge of the unfolding East-West arms race, Stalin decided to create dozens of centers of research and development excellence in the USSR. Some of these so-called "Naukograds" [Science Towns] were "Akademgorodok" [Academic Cities} devoted to basic research. Others were secret cities which were to provide the technical foundation for Soviet military technology - sputniks, long-range missiles, thermonuclear warheads of extreme yield. Among the work performed in such places were chemical, biological and nuclear weapons research and manufacturing, enrichment of plutonium, space research, and military intelligence work.

So, if your setting is similar to the modern age, what would the government have to do to keep the city secret?

Who is the government trying to keep the city secret from? Other governments, or just the public at large? 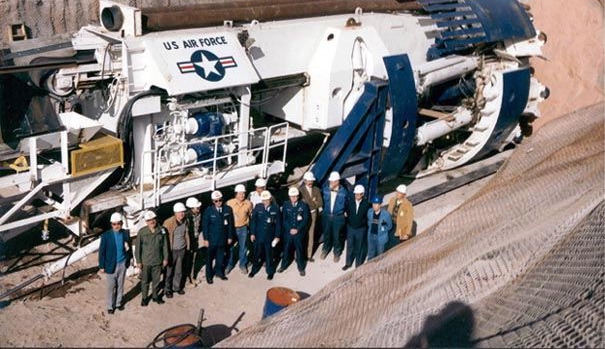 Since you can't just start in a cornfield, or patch of desert, you need a cover:

Everything you do is going to photographed from a satellite every two weeks at minimum. So you have to do everything in a way that is 'analyst resistant'

So build your city in Detroit. Detroit was dying a few years ago.

Buy up the places that are still in use. Demolish many buildings. Build underground. Carry out a desultory economic recovery to mask the change.

So build your city in an abandoned town. Uranium City was abandoned and went from a town of 5000 to a town of 500 in 3 weeks, and to 50 in a year when the mine shut down.

So officially close a military base. Or don't close it, and just trade one set of secrets for another.

Have a world's fair. When it closes, it becomes the town.

Take over a destroyed refinery. Rebuild it to look like a refinery, but inside tall towers do your secret work. You can't see oil being pumped in pipes.

Ok. That takes care of the satellite stuff.

You need to mask the activity too. No one will believe part of Detroit is abandoned if there are 50,000 people arriving and departing in rush hours. So you build a subway that handles freight as well as people. Disguise THAT as flood control.

6
How would an advanced civilization on a space station not be able to explore the planet they orbit without significant time between each expedition?

8
Could a civilization engineer supernovae?
70
How can I prevent the collapse of the Soviet Union?
8
Is it plausible for a bureaucratic dictatorship to be overthrown by a single individual?
3
How can I realistically make a worldwide government that works with my fictional world with different magical races?
37
How could a state without a military defense exist?
3
The government is transitioning from a bureaucratic dictatorship to a soviet democracy, how can I split the powers equally amongst a small group?
2
Could someone survive the post impact earth if they go out of the shelter after a few months?
1
Evaluate whether or not my country concept is realistic