How could it rain oil?

It’s 2019 in an alternate steampunk/dieselpunk universe. Population growth, dwindling resources, and the evil overlords have everyone cramped into big cities, toiling away in the hope of something better. For now though, it’s enough to just complain about the weather. Smogs are a frequent occurrence, you really don’t want to breathe in the air, and to top it all off, sometimes it rains oil. The ground goes all slick, the walls have this slightly weird rainbow-y sheen, and it’s enough to make anyone think twice about heading outside if they can help it.

So: how can I get it to rain oil? I was thinking initially about strong winds/hurricanes that lift oil into the clouds, and then they fall down again, but I have no idea if that’s a reasonable suggestion. I’d like it still to rain normally, but this seemed like a way to still get oily ‘rain’. If that’s not feasible/if there’s another way, I’d be up for suggestions!

The technology level is anything industrial level or later, but no magic. Also, I’d like it be to habitable for humans if at all possible...

EDIT: Forgot to mention the kind of oil I was aiming for - probably something petroleum based, but definitely something used in a manufacturing process more than an organic or culinary kind of thing. (However, I admit I don’t know a grand deal about oil, so you’re welcome to argue the point if extra virgin olive oil is where I should be focusing my efforts).

It wouldn't be pure oil but it could be usable with some processing:

Have airborne oil producing plankton. The bloom in clouds because of the condensed water droplets. They might make even more clouds by being condensation nuclei.

The plankton takes in water, CO2, trace elements from dust, and sunlight. It uses that to produce oil. The oil forms a film on the water droplets and increases their surface tension. I don't know if the surface tension would increase the chance of big drops forming or decrease it. However, that coating would make the rain drops shimmer in the sunlight. That may be a good visual for your story.

The drops that fall will be mostly water but if you can separate the oil out, you get your oil.

So, you have slightly green fluffy clouds that get much darker green (going to black) that then rain shimmering drops.

Come to think of it, trying to use windshield wipers would suck with the constant oil film.

Oil mist consists of micron-sized particles of oil suspended in the air. It can be produced in a variety of ways, but in general, it's aerosolized lubricant from a mechanical device. It's a fairly common hazard in machine shops, and a significant enough hazard on ships that all ships with engines over 2250 kW must be equipped with detectors.

In a steampunk world, with overly gratuitous airship traffic, perhaps those airships are creating enough oil mist for it to collect in the atmosphere and rain down to Earth. This could be due to either standard mechanical negligence, with old and leaky engines producing much of the mist, or perhaps because the safest way to handle oil mist on an airship is to vent it out into the atmosphere and rely on it diluting out to non-explosive concentrations.

Either way, the oil mist is gathered into clouds where it rains down as part of an otherwise-normal rain storm. It's unlikely that sufficient oil would be present to become an acute fire hazard, but it wouldn't be difficult to imagine that enough would collect to make the ground slick and give everything a nice oily sheen. All it would take would be enough airships.

Siloxanes are silicon oxygen polymers in the silicone family, slippery and volatile. The silicon sounds exotic but siloxanes are in lots of consumer products, like shampoo and personal lubricants. Depicted: Decamethylcyclopentasiloxane. 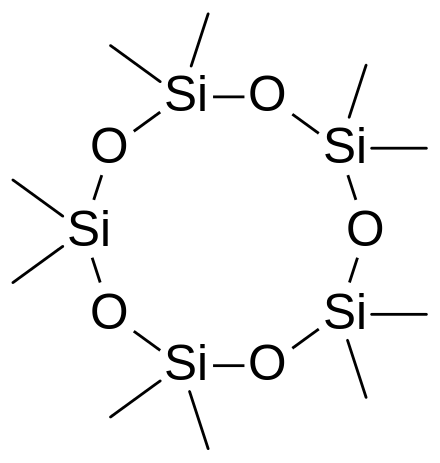 Cyclomethicones are a group of methyl siloxanes, a class of liquid silicones (cyclic polydimethylsiloxane polymers) that possess the characteristics of low viscosity and high volatility as well as being skin emollients and in certain circumstances useful cleaning solvents... Cyclomethicones have short backbones that make closed or nearly-closed rings or "cycles" with their methyl groups, giving them many of the same properties of dimethicones but making them much more volatile.

Siloxane pollution is a thing in the real world, and these molecules move from the many commercial products containing them into the environment. https://cvskinlabs.com/7-cosmetic-ingredients-that-are-bad-for-the-environment/

In your world, there are some big sources of atmospheric siloxanes - I was thinking scavenged or repurposed alien tech, or possibly building treatments to protect against pollution. These volatile siloxanes condense or precipitate out under the right conditions, forming a greasy Astrolube-like rain.

I like siloxanes for this question because in the siloxanes are real, useful, do form atmospheric pollution, are oils, and the words "siloxane" is good stuff for scifi. Also to my knowledge it has not been done.

Not normal rain, at least not in a world humans can live on the the vapor point of oils is way above boiling, if the air is warm enough to hold oil it is hot enough to kill any human who breaths it.

your best bet is tornado lifting, but that will be a regional and fairly rare occurrence.

Not the answer you're looking for? Browse other questions tagged weather steampunk or ask your own question.

16
How could constant or near-constant rain in an area be possible?
39
How can I explain a planet with perpetual rain?
2
How can I explain rain pouring skyward?
6
Magic Ship Armor Causing Fog
4
Can we make rain on Mars?
3
How to make glowing rain/mist?
5
Swimming in the rain?
12
How to make it rain men properly?
3
Scientific way for rain and pebbles to slowly fall “upwards”?