Ask Question
Asked 10 months ago
Active 10 months ago
Viewed 145 times
-1
$\begingroup$
Closed. This question needs to be more focused. It is not currently accepting answers.

So far, I have created a natural world, and I'm starting to think about putting a history of human interactions in it. First I'm going to start with the early history. That includes early migration, which lays down the foundation of future history, but I don't know how to structure it properly. Here is an example of what I want it to look like. 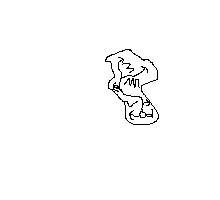 The base question is:

How do I structure the migration paths?

1:Do I make them go everywhere that they can get to?

2:Make them walk forever until they find a good area?

3:Force then to split up every once in a while?

1: Where do I start my first group?

Anywhere that is primitive civilization friendly

Usually, never. Somebody stops off at each point along the way while some subset goes farther. Near the end you have what is called a serial founder effect. Sometimes groups merge too.

Every time that primitive people can while still having access to fresh water and habitable temperatures.

4: What geological features do humans tend to settle in?

Fresh water and habitable temperatures are key. Many early migrations inland followed rivers from a coast to their source. Even a few miles of water, e.g., to a new island or continent is a very strong barrier. Jungles, deserts, ice fields, glaciers, tundra, areas inhabited by rivals (human or otherwise), and mountains can also be strong barriers and at least channel people into narrow routes between them or along rivers that run through them.

Also, climate and sea level are not constant and the course of rivers can change. What is passable at one time may not be passable at another. When conditions get bad in an area, everyone who tries to stay there dies.

What geological features do humans tend to settle in?

Some place with food and water. The places with the easiest food, the cleanest water and nicest weather will be settled first.

When do I branch off?

Any time that one group gets too big. There is a premise that due to our brain size, the largest size group of people (where you can know everyone, or where shame is effective for control) is about 150. Many communal groups (such as Hutterites and Mennonites) tend to split into 2 when their group/church size gets above 150-200 (the Hutterites moved a lot over the 400-ish years their denomination has existed).

A group that gets too large for the local terrain to support will have to break apart eventually. I don't think that logistics (shipping goods over a distance) is a thing at this time in your world.

Or that they'd like to settle someplace nice, but it is already occupied. Or worse, a stronger bunch decided to move in and kick your lot out.

When do I stop a group?

Not the answer you're looking for? Browse other questions tagged history or ask your own question.

15
For how long could a modern tank survive in a past war?
15
Methods for creating great people for your world's history
19
How long does it take for a fact to become a legend? (In a medieval setting)
8
How would early astronomers prove the existence of a spherical firmanent around the Earth?
4
Ideal Time Period for a Global Pandemic