Would it be realistically possible for a firebreathing dragon to exist on an omnivore diet, but only eat fish as the main source of meat?

The dragon is at this time in my story, a juvenile and can fly, and breathe fire, although fire breathing for him only seems to occur when he gets mad.

As a young dragon in the magic realm, he has survived solely on fish, berries, and other plants. I wanted to create a clan of dragons that were basically fish eaters but really not sure if that would work for growth.

Most carnivores require large quantities of meat to grow huge but not sure if it would work if he were solely a fish and plant eater. He is about the size of an adult human being at this time.

Ah, fire breathing dragons. Assuming your dragons are large beasts capable of flight, they are likely not exactly known for swimming, but if they can (though I doubt it), then larger fish may be possible targets.

More likely, fishing would be done in a strategy similar to perhaps the Bald Eagle - however, the size of the potential target depends on the dimensions of the dragon and the types and sizes of fish in your constructed world. To sustain such a large beast, significant amounts of food will be necessary, so there must be targets large enough to be worth hunting in order for fish to be the primary source of protein.

As for plant matter, such a large beast would likely need equivalently large sources of plant matter - in particular, fruit and other plants with enough size and nutritional value to be worth searching for. Bears as omnivores consume grasses and seeds as well as fungi and fruit, but the size of a dragon likely makes some of those options inadequate.

Overall, while your concept is possible (assuming the dragon is large and capable of flight), the environment will need to be shaped around the dragon itself. Given that it is omnivorous, I highly doubt that fishing is a good usage of its time given that the plant matter it would consume would most likely be on land where other forms of protein are likely to be jumping about.

I hope this provides a satisfactory response.

Yes it would be realistic

If you have a look at out natural animals, you will find that the largest are situated in the seas. The sea can provide an abundance of food and while it may sometimes be seasonal it is often in much larger quantities than animals on the land.

If the issue is going to be how much they eat overall, you simply need to give your dragons large stomachs so that they can eat a lot and put on some weight for when there isn't much food. A lot of hunters actually don't eat extremely regularly, and will simply just eat a lot in one sitting so they can survive a longer period of time without food.

Not everyone has the luxury of eating 3 meals a day at fixed times.

California condors used to eat a lot of dead fish and whales. 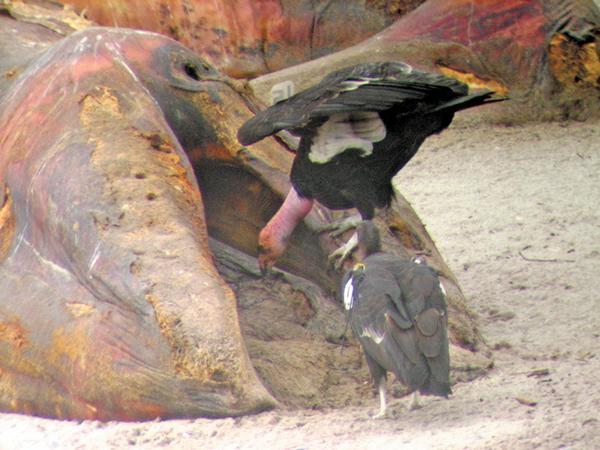 The California condor is (!yay) the largest North American bird. After the Pleistocene megafauna died out, condor populations persisted in California where coastal populations could sustain themselves largely on beached whales. Among other things, the crash of the whale population midcentury was really hard on the condors.

A dragon could be an unparalleled coastal scavenger in the mode of the condor. Large animals are thrown up by the sea. Condors are big and tough and can keep a carcass for themselves, driving off everything except a bear or an eagle. Nothing much is going to drive a dragon away from its carcass except another dragon - or maybe something larger dragging itself out of the sea to feed. In a world with dragons, things weirder than whales might wash up. Some things might still have some life in them.

If your dragon eats fish you are already foregoing the drama of the hunt for your story. Searching out and defending offerings from the ocean could substitute for hunting drama as regards moving along your narrative.

Not the answer you're looking for? Browse other questions tagged internal-consistency food dragons .

50
How to not starve gigantic beasts
6
How big is a dragon's hunting territory?

38
What is the approximate caloric intake of a dragon?
73
How to butcher your dragon?
11
Could a small (about 6 feet long) dragon live on a diet of fish?
5
How would a human organization get 20-foot tall fire-breathing, winged, sentient and intelligent lizards to comply with experimental procedures?
5
How might these advanced humans restrain their dragon test subjects?