Dredging in a fantasy setting

So, I am setting up a world for a DND campaign in which, through a magical accident in the past, the face of the globe is covered in ocean, all except for a few tiny islands where the highest mountain peaks were (I am hand waving the obvious problems with altitude and climate as the nature of the accident was essentially wishing for "more water on the planet" and it isn't really relevant to the story).

So society has finally recovered from the initial shock and settled into a state of equilibrium. One of the factions that has risen up in the interim is a builder faction who take dirt from the sea floor and carry it to add on the islands or shallow areas to make new landmasses and the party is tasked with protecting one of their expeditions. I was just wondering how to mesh the dredging aspect and make it believable, as it would have to be mostly mechanical in nature, as spell-casters can't function underwater naturally.

I have tried looking into how dredging was done it ancient times but there is not much information. Originally I had planned on having each expedition have divers who have strength enhancing and water breathing spells swim down and carry large amounts of dirt in bins but I was wondering if there were more elegant solutions.

A lot of this is going to depend on how deep your NPCs will be dredging. Dredging has been used as far back as 4000BC to build harbors and affect the characteristics of rivers. Most used boats with a crank and some buckets. DaVinci even invented a river dredger that would use the current of the river itself. 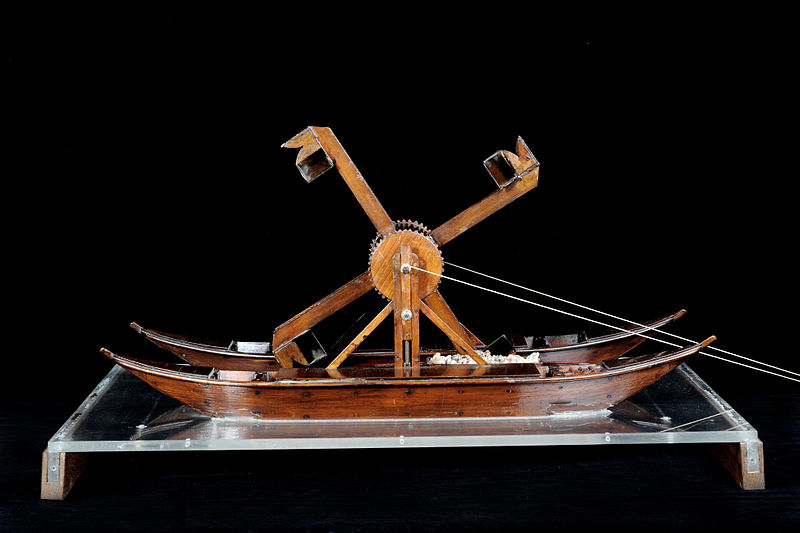 The trick is that all of these are done in fairly shallow water. Deep water dredging is incredibly difficult, even today, and the only way I could see it being done at any kind of reasonable scale is with automatons that just walk along the bottom of the ocean.

If your world is shallow enough you can use a similar technique as well as a handful of spells such as bones of the earth which can make great pillars of earth spring from the ground Control Water, which can do a "part the seas" effect, or Move Earth which can reshape the earth itself and slowly raise its terrain.

Again though, a lot of this is going to depend on how deep these oceans are.

There were two types of common dredging: drag dredging which was rare and more focused on shellfish and sponges and shovel dredging which only works in shallow water. drag dredging was literally dragging a bucket or net over the sea bottom. Shovel dredging was literally using a really long handled shovel and s series of winches to bring up sediment one, admittedly large, shovelload at a time, these are used primarily to dig channels and maintain rivers. either way your limits are not strength of the lifter but strength of ropes and shear man hours.

But in DnD you have some help. A ritual spell called water breathing. so unlike real methods people can actually go down with dredge buckets and fill them manually instead of relying on drag. Fitting ships with treadwheel crane was done in ancient so lifting the bins/buckets is easy. Of course adding to a mountain is going to mean moving gargantuan amounts of earth even to get a tiny sliver of land, since it will of course both fall down slope and be eroded away by wave action. You are better off inventing a spell that creates earth, given the strong need it would not be unreasonable. You can still use dredging for collecting shellfish, sponges, and treasure.

Diving bells are large bell-like structures meant for helping divers stay underwater for longer. Allegedly they have been used since the 4th century BCE as Aristotle wrote about a ‘cauldron’ that was forced down into the water but held air inside of it. 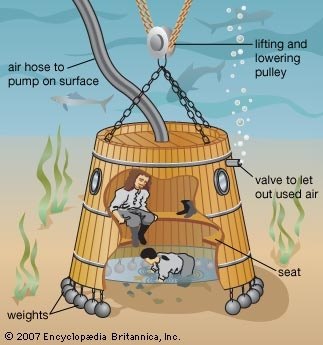 The one seen above is made of wood and weighed down with iron balls, however it could also be made out of metal. You can also see that this version has a pipe for fresh air to be pumped in and a vent to let out used air, allowing for longer dives. Earlier versions did not have this and simply relied on a pocket of air in the bell. Modern diving bells are typically closed, meaning they have an ‘air lock’ at the bottom to prevent the bell from filling with water.

Applying this to your question, your drudgers may use a diving bell to get down to the sea floor. Then buckets attached to a pulley system would quickly follow them. Your drudgers would then proceed to start shovelling mud or sand or gravel into the buckets, returning to the diving bell when they needed a breath of fresh air or rest, before going back out and continuing to shovel. Once the buckets were full, they could be pulled up, emptied into the hull of the ship and then sent down again to be filled up.

Have a look here.

Caissons have the advantage that they can be used by a pre-industrial society and should not be beyond the reach of your builder clan. While the article mentions the use of concrete they can be built of timber.

Dewatering could be achieved by magic users.

If you choose to go with pressurised caissons you will need to deal with Caisson disease.

Not the answer you're looking for? Browse other questions tagged magic environment construction or ask your own question.