Focused Earthquake by Remote Jumping up and down - Destroy the Palace!

The Emperor (may he live forever) lives in a beautiful palace surrounded by parks on the planet he rules. Surrounding the palace are the dwellings of the nobles, outside that are clerks, craftspeople, shopkeepers and everybody who has business living in a city. Next come wealthy farmers. Outside of that are the subsistence farmers and peasants.

Think North Korea for the sort of disparity in wealth.

The difference is that the empire covers the entire globe and at the antipode (yes it is a word) of the location of the Emperor (may he live forever) are the poorest, most exploited masses.

These people are poor but they are not stupid. They hatch a plan to destroy the Emperor's palace without ever going near it.

By leaping up and down in synchrony they intend to create a focused earthquake that occurs at the exact location of the Emperor's palace, and thus destroy it. That is to say that the epicentre of the earthquake is immediately under the palace. The idea is that successive seismic waves will move around and/or through the planet and meet at a single point on the far side.

I have found the following information but I have no idea how or whether it can be applied.

The vibration of plates is a special case of the more general problem of mechanical vibrations. The equations governing the motion of plates are simpler than those for general three-dimensional objects because one of the dimensions of a plate is much smaller than the other two. https://en.wikipedia.org/wiki/Vibration_of_plates

Vibrations of a solid sphere https://www.ucl.ac.uk/~ucapahh/research/atoms/laf3/node7.html

It seems very complex so that is why I would be happy for any simplifications to be made. In other words I would be willing to change the makeup of the planet to make the maths easier.

The following seems related but it's beyond my knowledge of maths or physics.

mechanical waves through solids are damped more as the wave frequency increases. https://physics.stackexchange.com/questions/412852/does-a-hollow-sphere-vibrate-longer-than-a-solid-sphere 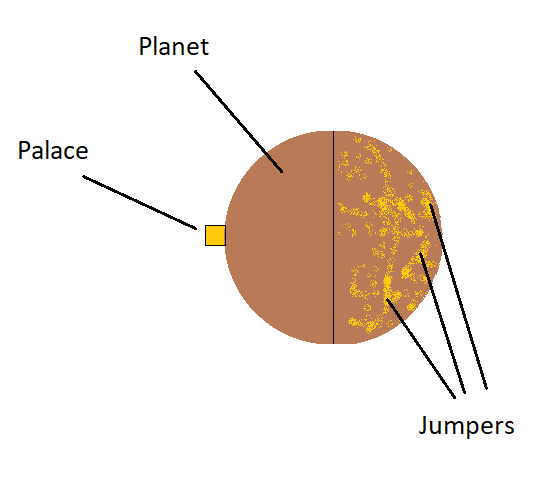 Given the assumptions listed below: Is it possible for billions of people who are optimally placed and perfectly synchronised in their jumping, to create a focused earthquake at the opposite side of a planet? I am hoping that repeated jumping will set up a resonance and thus amplify the waves massively.

The average mass of a person is 90 kg.

They are arranged however you wish so as to make the plan work. All feet must start at the same level - either ground level or they could all jump off a box up up to 1 m high.

Synchronised jumping can go on for up to 20 minutes.

There is a way of synchronising the jumping and everyone knows exactly what to do and when. (vigorous hand-waving!)

The planet is a sphere (or other plausible shape that makes the calculation easier).

The distribution of the jumpers can take any form and be anywhere in the opposite hemisphere to the palace.

The vibrations from the jumping, end up focused narrowly over a circular area of 10 km diameter or so, precisely where the palace is.

You may make any reasonable adjustments or idealisations to the size, and physical makeup of the planet that may be helpful.

The epicenter, epicentre or epicentrum in seismology is the point on the Earth's surface directly above a hypocenter or focus, the point where an earthquake or an underground explosion originates. https://en.wikipedia.org/wiki/Epicenter

I am hoping that the vibrations travelling through and/or around the world will coincide at a single point.

I'm not sure if this is the answer you're looking for, but Michael from the channel Vsauce has made a video that i think perfectly fits your question (Including some other topics) which i'll link here: What if everyone jumped at once? Vsauce

Quoting the answer that ThisRandomGuy has given, and the video in question (which has all of the proof you could need) i think its fair to say that even if five billion people jumped at the same time in the same hemisphere - Same region, even - the effects would be negligible, considering the incredible mass of the planet; and as is cited in the video, you would need about 7 million times more people than are currently alive today to recreate the 2011 Japan earthquake that measured a 9.0 in the richter scale, but even then, that would be roughly 50 Quadrillion people, and the effects of such a feat would be mostly felt in the area of the jump, and definitely not reverberated through the world in such a way to cause any structure in the other side of the world to collapse.

I hope this has been helpfup!

Oh, all right, as an addendum to the answer: a level-9 earthquake on the Richter Scale releases about 2e+18J over time. Using a more sensible value for the 20-minute calculation (see footnote #2) the people release about 1.3x1016J equating to a 7.55 earthquake. Assuming you can get them all to jump on the same infinitely small point. Realistically, I still think this is boogers against a wall. You wouldn't feel a thing (though a good seismometer might read it). The energy is just so distributed.

If every person involved jumped up and down once on an infinitely small point on the surface of the earth...

Ignoring everything else (rotational energy, orbital energy, etc.), the energy delivered by all those jumping people is inconsequential to the point of being irrelevant compared to the mass of the Earth. It would be like (pardon my French) flicking boogers at a wall for an hour and wondering why the wall hadn't moved.

What would happen? Kinetic Energy = (1/2)mv2 ≅ 2.2x1013 joules (let's say they "fell" for 1 second), which is the equivalent of about a 5kT nuclear explosion. The biggest above-ground explosion was the Tsar Bomba at 50,000kT, which didn't move the Earth.1 Therefore, all those people would make quite a crater, but nothing more (and it wouldn't matter how many times they jumped given normal jumping rhythm).

But what if we were a Km up? According to the handy-dandy Splat Calculator, they'd hit with 4.4x1015 J or just over 1 megaton of nuclear explosive force. Tsar Bomba... 50mT... we're still not moving the planet.

But in the spirit of XKCD and taking some inspiration from our sister site, physics.SE: if we want to speed up or slow down Earth by a single m/s (and assuming that single jump occurred in exactly the right spot at exactly the right time, I'll get to synchronized jumping in a sec)...

But I promised synchronized jumping. Assume our expected number of people jumping every second, for 20 minutes: 1,200 impacts for a total of 2.6x1016J

And the math is actually quite a bit more complex than this because I'm not accounting for rotational energy or compressibility or the likelihood of punching through the crust and becoming stellar BBQ or anything like that. I'm simplifying something awful. But...

Let's assume the Earth isn't compressible and 100% of all the energy applied over time goes into moving the planet. How long would the jumpers have to jump to get that 1 m/s change?

Full disclosure, I could be wrong. If I am, would someone please point that out? But I'm pretty confident in the boogers-vs-wall metaphor.

BTW, if you want to see this analysis from a completely different point of view, go read my answer to Can a planet's axial tilt be changed by carefully planned and set high-energy explosions? (I just love using the Tsar Bomba as an example!).

1 Granted, it wasn't actually on the surface. The detonation was above the surface... but you get my drift. C'mon! Work with me here!

2 The astute observer will realize that falling for a second would require rising for 0 seconds, which is a bit fanciful, but if you want to double the jump time, halving the applied energy... now you only need 144% of the Earth's estimated lifespan to date... boogers... wall... you get the picture.

You have 5 x 10^9 emitters at your disposal - i hope the Emperor has chosen to subjugate them on a planet with low attenuation for the kind of wavelengths they are able to generate (so i hope they are not tilling the soft loamy earth, but rather polishing the crackless bedrock the planet is made from) - if so, they could all form a phased array (https://en.wikipedia.org/wiki/Phased_array), given the planet is either isotropic, or the anisotropy is either known or can be deduced from a few test runs (-jumps) (i bank here on the hope that they have some sort of coconspirators on the Emperor-side of the world, relaying them the seismic pickup). The goal would be to create a specific reaction on a specific spot on one side of the planet by having every emitter produce a signal at the exact moment needed, so their individual wave would arrive, in the right phase, at the destination, thereby bundling all the little signals into one big Woomph. https://phys.org/news/2016-09-d-medical-ultrasound-applications.html https://www.youtube.com/watch?v=WffR6HrEqTA

To bring down the palace, let's assume it was built with a lot of hubris (in-character for the Emperor, and not a bad bet on our assumed planet with no small-wave attenuating-and-dispersing but ultimately dangerous plate tectonics), so we only need a small shake of the right kind to drop the arching golden roof suspended hundreds of meters above the ground onto the revellers below, surely crushing them and the Empire in one fell swoop. Let's say 100 people kicking in unison at a specific column would suffice- - What attenuation would we be able to contenance in that case? You have 5x10^7 times more people than you would need (about 154 dB), but they are 1000km (=10^8 cm)away, on average (it's a small planet). Attenuation may therefore not be bigger than 0.15 dB/km or 0.0000015 dB/cm; Water, for instance, has attenuation rates of below that for frequencies up to 20 kHz; Perhaps the world is pure water, for the avid fisherman that the Emperor is?

Not the answer you're looking for? Browse other questions tagged reality-check hard-science assassination or ask your own question.

8
Can a planet's axial tilt be changed by carefully planned and set high-energy explosions?

46
What single element could destroy the world?
46
What's the most efficient way to destroy civilization from orbit?
7
Microphone implanted in and powered by the body
0
Scaling down an electrolaser with the help of nanotechnology
21
For a head of a palace guard (staying mainly inside the palace), is an estoc a realistic weapon of choice?
0
Humanoid jumping 30ft into the air?
6
Weaponising the Tesla earthquake machine or modern equivalent