How to explain planetary rings pulsating?

A spacecraft enters an unnamed system and spotted a gas giant with a pulsating planetary ring, it glows bright intermittently. What natural phenomenon could be responsible for such brilliant display? It would be better if you can explain why the glows only occurs within certain range of the electromagnetic spectrum.

Io and Jupiter have a very special relationship. Io is a volcanic moon, which ejects charged particles. Due to its relatively low gravity (~0.18g), the particles escape, but they get trapped by Jupiter's immensely powerful magnetic field and form a plasma torus. The density of the plasma is higher close to and ahead of Io. 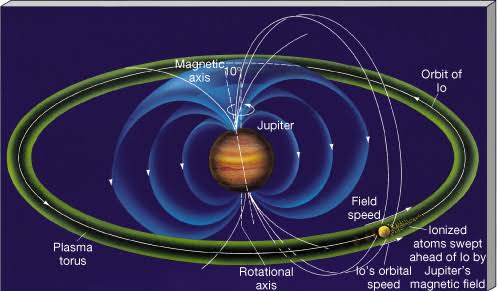 Saturn is like a smaller Jupiter, but with huge rings. It has shepherd moons - moons that orbit between rings.

Now combine both: a gas giant with saturnian rings, a volcanic shepherd moon and a jovian magnetic field. The plasma shines (in specific wavelengths, even!), and the glow is reflected by the rings. The plasma glows and dims as the moon orbits the planet - it seems stronger when the moon is on the same side of the planet as you, and diminishes when the moon is on the other side.

For reference, the orbital periods of Prometheus and Epimetheus, two of Saturn's shepherd moons, are approximately 0.6 and 0.7 Earth days, respectively.

Not the answer you're looking for? Browse other questions tagged space-travel gas-giants planetary-rings or ask your own question.