I'm currently contemplating ways to make dragons have a sustainable energy source in a medieval world, while still acting like the traditional soaring, adventurer grabbing, gold hoarding dragons (not necessarily with fire breath). One of those ways I thought of was Gold.

Is there a biological way to use gold as some form of energy for a otherwise purely biological creature, and how effective would it be? This would mean that there is a way to use gold somewhere along a reaction chain to fuel the creation ATP or maybe some other less traditional biological energy source.

You can assume that other essential nutrients will still be taken in by the dragon.

A bit of reference for these dragons: They are based off of Dwarf Fortress' dragons They grow to be about 25,000,000 cm3, and a body model capable of flight, they do not breath fire, however.

If gold is sadly not usable as a fuel, instead explain how it could be used as a biological catalyst, it's a perfectly acceptable answer as well. (Thanks for pointing this out, John)

I'm not even going to try to summarise this stuff in much detail - just a very brief overview and some block quotes and links, okay?

Gold functions extremely well as a catalyst when ground into nano-scale particles, and is in active use and R&D both in biochemistry research and standard chemistry research - in specific it's very useful for converting CO into CO2, and also for synthesis of vinyl chloride through acetylene hydrochlorination - there are also several other articles and abstracts out there dealing with the specificity of the size requirements of the nanoparticles for gold to be highly effective as a bio-catalyst; bottom line: you could posit that your dragons have specific gold-binding transfer proteins (see last link at bottom for THAT article) that enable secondary and tertiary metabolic pathways which supercharge their high-demand flight muscles - or conceivably (you'd have to research the chemistry) you could tie the vinyl chloride production and the attendant acetylene byproduct in such that a dragon, absent gold, can walk/crawl but would have trouble flying, whereas a gold-imbibing dragon is fast as hell, can fly, and can in fact breathe fire on demand.

I quote at length (sorry) from abstract at link below:

Gold has fascinated people for millennia; its bright lustrous yellow color has been molded in great works of art, and it has been prized because it is the most noble of the metals and is considered immutable. Gold colloids have also been used to color glass for centuries, and the most vivid example is perhaps the Lycurgus Cup which dates to the fourth century AD and is a very early example of dichroic glass which changes from green to a translucent glowing red when light is shone through due to the presence of colloidal gold nanoparticles.(1) It was Faraday who presented the first scientific paper on the properties and preparation of gold colloids and demonstrated these vividly colored nanoscale structures at the Royal Institution in 1847.(2) Indeed, these gold sols are still stable and remain in the Royal Institution in London to this day.(3) Perhaps it was the perception of the immutability of gold that hampered the development of the chemistry of gold. Until about 40 years ago gold was thought of as one of the least interesting elements in the periodic table with very few pages devoted to it in textbooks of the day. However, now gold is known to have an exceptionally rich and exciting chemistry, and gold nanoparticles have been finding efficacy in many applications especially in the medical arena for cancer treatment.(4) The topic of catalysis by gold is now a very well-studied topic as both homogeneous(5,6) and heterogeneous catalysts.(7) The new advent in the interest in the chemistry of gold has its origins in two discoveries in the 1980s when gold was found to be the best heterogeneous catalyst for both the oxidation of carbon monoxide at ambient temperature(8) and the synthesis of vinyl chloride by acetylene hydrochlorination,(9) and the gold catalyst has recently been commercialized for this process in China.(10) The use of gold complexes as homogeneous catalysts is now well-advanced after the initial discovery;(11) however, although heterogeneous gold catalysts are now finding commercial application the nature of the active gold species in these catalysts has until recently been an intensely debated topic. In this Outlook the recent advances in understanding the nature of the active site for the two reactions for which gold is, without doubt, an exceptional catalyst, namely, carbon monoxide oxidation and acetylene hydrochlorination, are discussed.

And herein another lengthy quote - this article focussing on studies of the mechanical and physical aspects of how gold nanoparticles used for catalysis react:

Gold has always been perceived as a precious material: you win a gold medal when you prove to be the best in a competition; you only get a Gold credit card when you are a preferential customer, and the jewelry made of this material is amongst the most valuable. However, gold has also unexpected properties: It can act as a catalyst and transform carbon monoxide (CO) to carbon dioxide (CO2) when it comes in the form of tiny pieces, called nano-particles.

Gold suddenly enhances desired chemical reactions as a catalyst for example in the removal of odours and toxins or to clean automotive exhaust gases. Researchers from Switzerland, UK, the USA and the ESRF (Grenoble) have monitored the catalytic process and proposed an explanation for the high catalytic activity of gold. They publish today their results in the journal Angewandte Chemie online.

The team used nano-particles of gold instead of bulk gold. The catalyst structure looks as if someone had pulverized a piece of gold and spread the tiny nano-sized pieces over an aluminum oxide support. The properties of the nano-particles are very different from those of bulk gold. Only when the gold atoms are confined to the size of just a few millionth of a millimetre they start showing the desired catalytic behaviour.

Scientists already knew that gold nano-particles react with this kind of setup and catalyses CO with oxygen (O2) into CO2. What they did not know was how the oxygen is activated on the catalyst. In order to find that out, they set up a cell where they could carry out the reaction, and in situ perform an X-ray experiment with the ESRF beam.

The researchers first applied a flow of oxygen over the gold nano-particles and observed how the oxygen becomes chemically active when bound on the gold nano-particles using high-energy resolution X-ray absorption spectroscopy. While constantly monitoring the samples, they switched to a flow of toxic carbon monoxide and found that the oxygen bound to the gold reacted with the carbon monoxide to form carbon dioxide. Without the gold nano-particles, this reaction does not take place. “We knew beforehand that the small gold particles were active, but not how they did the reaction. The nice thing is that we have been able to observe, for the first time, the steps and path of the reaction. The results followed almost perfectly our original hypotheses. Isn’t it beautiful that the most inert bulk metal is so reactive when finely dispersed?” comments Jeroen A. van Bokhoven, the corresponding author of the paper.

The possible applications of this research could involve pollution control such as air cleaning, or purification of hydrogen streams used for fuel cells. “Regarding the technique we used, the exceptionally high structural detail that can be obtained with it could be used to study other catalytic systems, with the aim of making them more stable and perform better”, says van Bokhoven.

One of the great advantages of this experiment is the nature of catalysis. The fact that once the material has reacted, it goes back to its initial state, has made the experiments easier. Nevertheless, in technological terms, it has been very demanding: “We combined the unique properties of our beamline with an interesting and strongly debated question in catalysis. Some extra time was needed to adapt the beamline, to the special requirements of this experiment,” explains Pieter Glatzel, scientist in charge of ID26 beamline, where the experiments were carried out. At the end, it only took the team a bit over half a year to prepare and carry out the experiments and publish the paper. “This is a very nice recognition of our work,” says Glatzel.

The article appears in this week’s international edition of Angewandte Chemie with a very high impact among the chemistry audience. In addition to this, the paper has been attributed the status of Very Important Paper, which is given to only 5% of all the publications in this journal.

Here's a way gold can be use to get more energy, although it's not really using biological means.

Remember, dragons are just big, really big, lizards with wings. And lizards are reptiles, which are poikilothermic. Hence, lizards bask in the sun to bring their body temperature up. But heating up a body of 25 m^3 is going to require lots of energy. Which is why your dragons want mirrors, to reflect more sunlight onto them. 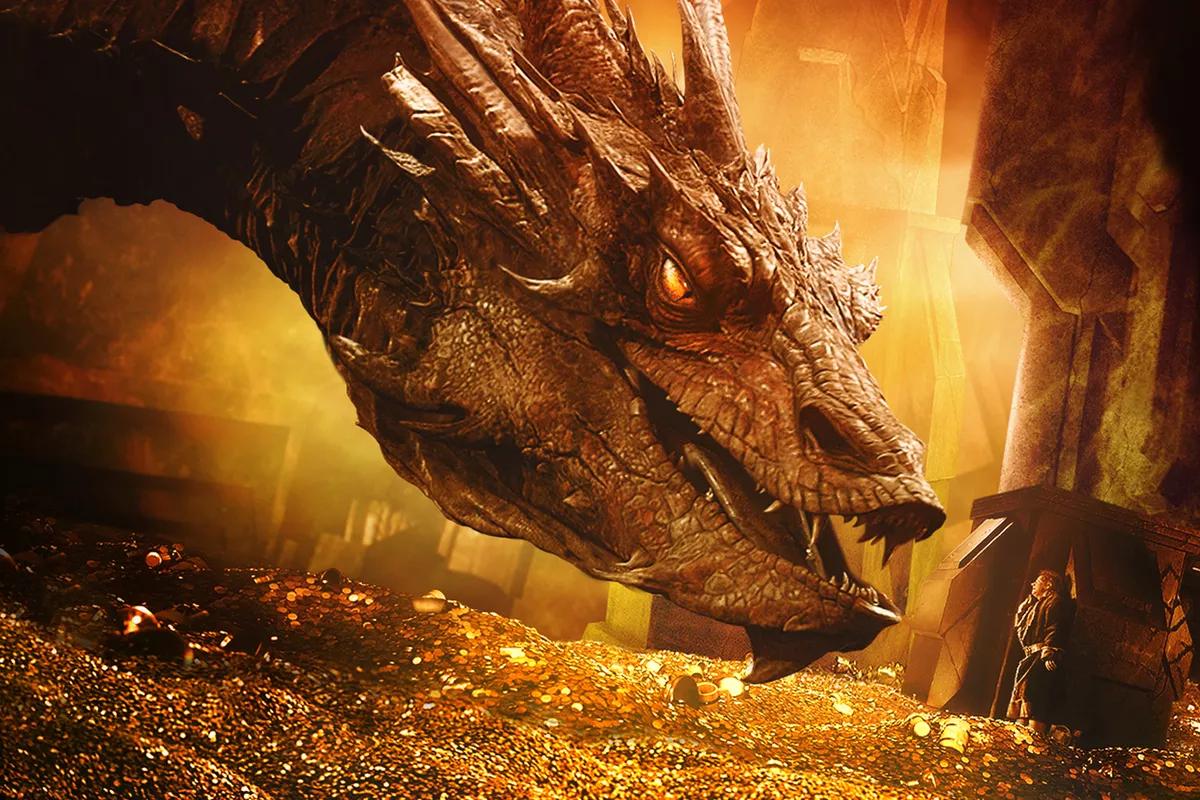 You have a massive pile of the stuff and you eat everyone who turns up to steal it....

Gold is insanely non-reactive. In order to dissolve it you need aqua regia(Nitric Acid, Sulphuric Acid, Cyanide) So any chemical process is pretty much out of the question.

Since Gold is further down the periodic table than iron attempting to get energy from nuclear fusion is out since that would absorb rather than release energy.

With only one natural isotope which is stable, fission and nuclear decay is out.

Being highly reflective, photovoltaic uses are out.

196
How could dragons be explained without magic?
3
Buying energy from the sun?
39
How could Medieval cultures defend themselves against dragons?
2
How does a dragon evolve to harness energy from nuclear source?
34
How do dragons not burn themselves?
3
How could dragons run?
8
How much energy do plants produce?
11
So, how do I put the extra muscle, needed for flight, into a large flying creatures like dragons?
2
How much energy could yeast produce?