History of Worldbuilding - The Flying City or Flying Island [closed]

Ask Question
Asked 11 months ago
Active 11 months ago
Viewed 376 times
-6
$\begingroup$
Closed. This question needs to be more focused. It is not currently accepting answers.

Note that I have edited the question in order to get it reopened. I have done so in such a way as to avoid as far as possible invalidating existing answers.

The idea of a city or castle that floats in the sky is popular. To avoid reinventing the wheel when creating my own floating city I would like to know the history and basics of previous such islands.

The best answers will give the dates of previous versions together with clear supporting evidence of their existence and the basis of how they worked.

Why is this relevant to Worldbuilding

It is relevant because I want my floating cities to be original and not appear to be ripoffs of what others have done. At the same time I would like to gain inspiration simply by seeing how others incorporated such things into their world. Building on the shoulders of giants is better than always starting from scratch.

The answer is 1726. In Jonathan swift's Gulliver's Travels.

Laputa is a flying island described in the 1726 book Gulliver's Travels by Jonathan Swift. It is about 4.5 miles in diameter, with an adamantine base, which its inhabitants can maneuver in any direction using magnetic levitation. It has a cave in the very centre which is precisely there to gather all the rainwater. It is also used by the king to enforce his supremacy. 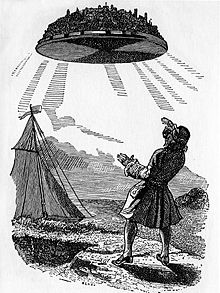 While this is a flying island. It is inhabited.

Laputa's population consists mainly of educated people, who are fond of mathematics, astronomy, music and technology, but fail to make practical use of their knowledge. Servants make up the rest of the population.

The Laputans have mastered magnetic levitation. They also are very fond of astronomy, and discovered two moons of Mars. (This is 151 years earlier than the recognized discovery of the two moons of Mars by Asaph Hall in 1877.) However, they are unable to construct well-designed clothing or buildings, because they take measurements with instruments such as quadrants and a compass rather than with tape measures.

Laputa is a male-dominated society. Wives often request to leave the island to visit the land below; however, these requests are almost never granted because the women who leave Laputa never want to return.

It's easy to see this is the literary ancestor of flying cities and, not surprsingly, floating islands.

However, Swift's Laputa is cited as the first flying island. Interestingly there is a longer tradition of floating seaborne islands. So it wasn't until the 18th century they took to the air.

The Birds (Greek: Ὄρνιθες Ornithes) is a comedy by the Ancient Greek playwright Aristophanes. It was performed in 414 BCE at the City Dionysia where it won second prize. (Wikipedia, s.v. The Birds (play))

Aristophanes, a Greek playwright, wrote and directed a drama The Birds, first performed in 414 BCE, in which Pisthetaerus, a middle-aged Athenian persuades the world's birds to create a new city in the sky to be named [...] Cloud Cuckoo Land (Νεφελοκοκκυγία Nephelococcygia, sometimes known as Nubicucculia in Latin), thereby gaining control over all communications between men and gods. (Wikipedia, s.v. Cloud Cuckoo Land)

The play begins with two middle-aged men stumbling across a hillside wilderness, guided by a pet crow and a pet jackdaw. One of them advises the audience that they are fed up with life in Athens, where people do nothing all day but argue over laws, and they are looking for Tereus, a king who was once metamorphosed into the Hoopoe, for they believe he might help them find a better life somewhere else. Just then a very large and fearsome bird emerges from a camouflaged bower, demanding to know what they are up to and accusing them of being bird-catchers. He turns out to be the Hoopoe's servant.

[Hoopoe is ἔποψ epops in Greek, and upupa in Latin; hence the scientific name, Upupa epops.]

They appease him and he returns indoors to fetch his master. Moments later the Hoopoe himself appears—a not very convincing bird who attributes his lack of feathers to a severe case of moulting. He is happy to discuss their plight with them and meanwhile one of them has a brilliant idea—the birds, he says, should stop flying about like idiots and instead should build themselves a great city in the sky, since this would not only allow them to lord it over men, it would also enable them to blockade the Olympian gods in the same way that the Athenians had recently starved the island of Melos into submission. (Wikipedia, s.v. The Birds (play))

A performance of the play The Birds by Aristophanes: a man is performing on a stage attended by a man with wings and a young boy, other people dressed in bird costume are gathered around the front of the stage. Etching by Henry Gillard Glindoni. Image available on Wikimedia under the CC BY 4.0 International license.

The following excerpts are from the English translation by Eugene O'Neill, Jr., New York, Random House, 1938, available at Perseus.

Pisthetaerus: First I advise that the birds gather together in one city and that they build a wall of great bricks, like that at Babylon, round the plains of the air and the whole region of space that divides earth from heaven.

Pisthetaerus: Then, when this has been well done and completed, you demand back the empire from Zeus; if he will not agree, if he refuses and does not at once confess himself beaten, you declare a sacred war against him and forbid the gods henceforward to pass through your country with their tools up, as hitherto, for the purpose of laying their Alcmenas, their Alopes, or their Semeles! if they try to pass through, you put rings on their tools so that they can't make love any longer. You send another messenger to mankind, who will proclaim to them that the birds are kings, that for the future they must first of all sacrifice to them, and only afterwards to the gods; that it is fitting to appoint to each deity the bird that has most in common with it. For instance, are they sacrificing to Aphrodite, let them at the same time offer barley to the coot; are they immolating a sheep to Poseidon, let them consecrate wheat in honor of the duck; if a steer is being offered to Heracles, let honey-cakes be dedicated to the gull; if a goat is being slain for King Zeus, there is a King-Bird, the wren, to whom the sacrifice of a male gnat is due before Zeus himself even.

Messenger: The wall is finished.

Messenger: It's a most beautiful, a most magnificent work of art. The wall is so broad that Proxenides, the Braggartian, and Theogenes could pass each other in their chariots, even if they were drawn by steeds as big as the Trojan horse.

Messenger: Its length is one hundred stadia; I measured it myself.

Pisthetaerus: A decent length, by Poseidon! And who built such a wall?

Messenger: Birds —birds only; they had neither Egyptian brickmaker, nor stonemason, nor carpenter; the birds did it all themselves; I could hardly believe my eyes. Thirty thousand cranes came from Libya with a supply of stones, intended for the foundations. The water-rails chiselled them with their beaks. Ten thousand storks were busy making bricks; plovers and other water fowl carried water into the air.

Pisthetaerus: And who carried the mortar?

Pisthetaerus: But how could they put the mortar into the hods?

Messenger: Oh! it was a truly clever invention; the geese used their feet like spades; they buried them in the pile of mortar and then emptied them into the hods.

Jack and the Beanstalk

There exist many variants, the Wikipedia version of the story is thus:

Jack is a young, poor boy living with his widowed mother and a dairy cow, on a farm cottage. The cow's milk was their only source of income. When the cow stops giving milk, Jack's mother tells him to take her to the market to be sold. On the way, Jack meets a bean dealer who offers magic beans in exchange for the cow, and Jack makes the trade. When he arrives home without any money, his mother becomes angry and disenchanted, throws the beans on the ground, and sends Jack to bed without dinner.

During the night, the magic beans cause a gigantic beanstalk to grow outside Jack's window. The next morning, Jack climbs the beanstalk to a land high in the sky. He finds an enormous castle and sneaks in. Soon after, the castle's owner, a giant, returns home. He smells that Jack is nearby, and speaks a rhyme:

In the versions in which the giant's wife (the giantess) features, she persuades him that he is mistaken and helps Jack hide. When the giant falls asleep. Jack steals a bag of gold coins and makes his escape down the beanstalk.

Jack climbs the beanstalk twice more. He learns of other treasures and steals them when the giant sleeps: first a goose that lays golden eggs, then a magic harp that plays by itself. The giant wakes when Jack leaves the house with the harp and chases Jack down the beanstalk. Jack calls to his mother for an axe and before the giant reaches the ground, cuts down the beanstalk, causing the giant to fall to his death.

Jack and his mother live happily ever after with the riches that Jack acquired.

According to Wikipedia the story originates before much classical mythology and is at least 5000 years old. This is born out in a paper published by the Royal Society which performs a comparative phylogenetic analyses to uncover the ancient roots of Indo-European folktales. Proto-indo-european being at the apex in this graphic example of language relationships. 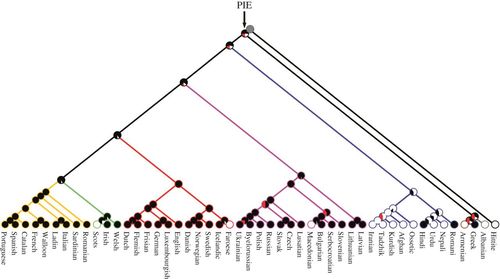 [a] set of Bayesian analyses were carried out on tales inferred as being potentially present in the populations’ hypothetical last common ancestor, ‘Proto-Indo-European’.

What about cross-cultural contamination:

In my view the study is thorough and exhaustive and indicates origins of this among other fairy tales as being at least five thousand years ago.

Not the answer you're looking for? Browse other questions tagged worldbuilding-resources or ask your own question.