What species should be used for storage of human minds?

The business of mind storage became a profitable one, after the discovery of a magical process that allows the memories and personality of a living being to be transferred into another body. Consciousnesses are stashed in animals (or rented humans, for the wealthy) while the body undergoes surgery. Dangerous prisoners suddenly become much easier to take care of. Falconry becomes an extremely popular hobby, although in a rather altered form. The process is easy and cheap, only requiring a trained mage to do it. While in another body, one is fully capable of controlling and using the host body as if it were one's own.

For the purposes of this question:

My question: Based on affordability, portability, safety, and other factors, what animal is overall the best option for a mind storage business (primarily for hospital patients with painful conditions)? For example, mice would probably not be a good choice, because they have a short lifespan and could be too risky to use.

Assuming they are going to recover.

Turtles. Very sturdy, easy and cheap to keep, long-lived. You can also reduce their metabolism and keep them lethargic.

Otherwise, dogs. Not so cheap, and require way more space. At the same time, they're more active and could supply more enjoyable experiences.

In the long run, however, probably the law would start including sentences to "temporary obliteration" (i.e. involuntary hosting) for those crimes where rehabilitation is either unlikely or pointless. In those cases, criminals would be sentenced to a certain period of time during which their bodies would be occupied by someone else. Since the new occupant is a productive member of society, and the criminal is, to all intents and purposes, nowhere, less prisons are needed. So, another possibility becomes «humans».

This opens other interesting problems though: what if the new occupant damages the body? Or even modifies it - "Hey, I got two years for embezzlement, I expected to find myself aged two years, not tattooed over!". What if the new body enters a relationship? Involuntary hosts probably will require some visual identification, unless they're confined to the hospital or dedicated towns.

As much as there might be a trade in recreationally adopting the form of a golden eagle or a porpoise. A very safe and efishent storage vessle would be the goldfish:

Lifespan 5-10 years, small and easy to feed and house, cheap to replace when obsolete.

In a cash-strapped society this would be suitable for low value citizens, welfare-state cases or prisoners.

When the economy permits.: 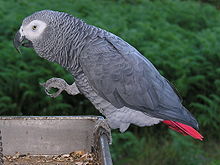 With a 40 to 60 year lifespan and the ability to communicate in recognisable human speach (not to mention fly) this would be a great option.

The better off citizens would I'm sure be given the choice of their preferred animal from among a suite available at each medical facility.

Ultimatley, the law of supply and demand will allow people to become whatever they want. There might be some illegal options such as an adult mayfly (too short a lifespan) or a planarians (people would be able to infinitely clone themselves and their memories at will) but commerce will prevail, it always does.

Where commerce is concerned, fads and fashions will I'm sure come and go, the fallback option in times of financial chrisis will be the expedient and cheapest - the old goldfish.

Hospital administrators could find that there developes an illicit trade in revenge-consciousness transfers - "Do you know someone you'd like to see as a cockroach dancing on a hot tin-lid? We have the answer."

Society would then, of course need to cope with the illicit trade in body upgrades and people turning up at police stations claiming to be someone else. Interesting issues your world throws up.

The pig anatomy is very close to our own. Even the pig nervous system and brain structures are very close to human. Pigs even have a similar social structure.

So it would be a short acclimatization period for the human 'mind' to adjust to the new surroundings and body.

The biggest relearning curve would be walking on four legs vs two.

The drawback is the shorter life span of the pig - 15 to 20 years potential.

There isn't one answer, because you are applying the idea to different situations.

Used as punishment, you want something that's easy to handle, not dangerous and having big troubles running away. So something small, harmless and slow is best. Snails are out (not vertebrates), but there are also really small frogs, or of course, fish. Fish are generally easy to keep and can't run away due to lack of legs. Aquarium, done. You want to pick a species with a life expectancy higher than the prison sentence, or change bodies every few years.

Completely different requirements. You need something that is comfortable for the patient for a limited time. My best idea is cats. They sleep a lot (about 16 hours a day) but when they're awake, from what I see they are having fun, they are quite sturdy for their size and can reach places and do things that neither humans nor most other animals can. However, that would only be your default offer, because patients would most likely want a choice. Many people will want to fly, so you'll probably have some birds on offer as well as flying lessons.

How has no one said ape or chimpanzee yet? They're the animals already most similar to humans.

Mantis Shrimp, for the wealthy

Although the idea of being a shrimp seems weird, the experience will surely be worthwhile, and should keep them entertained for the duration of their habitation.

Being a Mantis Shrimp would be cool for a couple reasons:

So, I think being a mantis shrimp would be rather fun.

Tardigrade is known to have cyptobiosis, namely they can suspend their metabolism. They can survive under extreme environments that would kill almost any other animal.

While their average life span is only a few month, they can be dehydrated to skip a rather long time period; and the fact that they are "immune" to most fatal factors for other animals, I find it suitable for a 'storage' for human mind, especially for those who just want to stay safe and wait until their operations end.

You have opened a serious can of worms:

Scenario 1: Driver is responsible for someone else becoming a quadriplegic. Judge sentences him to a body swap.

Scenario 2: Reconditioning. Hate working out at the gym? Have you let your self go to hell? Pay someone to swap bodies with you. They are really good at will power. In a more serious vein this may be a treatment for anorexics.

Scenario 3: You're young, and rich. You want to engage in all the sins of adulthood, but you're still underage. Swap for money into an 21 year old, and go out and party!

Scenario 4: Kidnap someone. Mind swap. You in their body commits serious crimes. Come back. Swap back. You get off scot free.

Scenario 5: Body napping. I'm rich, old, and ruthless. I kidnap someone young and fit, move his mind into a turtle, move into his mind, and abandon my husk.

All these animals don't have the mental capacity to accommodate human consciousness that's approximately 2 petabytes. Hence prisoners, robots and cloned human bodies are the only compatible answers for this question

Not the answer you're looking for? Browse other questions tagged biology magic consciousness mind or ask your own question.

81
How much mayhem could I cause as a sentient fish?

4
How could a human and an animal swap minds?
6
Xenobiology of extraterrestrial parasitic superorganism
7
The plausibility of a mind-controlling and genome-altering pentastomid
8
Anatomically Correct “Stranger Things” Mindflayer's Monster
2
How can a witch elf ensure that their soul is resurrected?