These dragons spend most of their lives in the ocean, however during the mating season they will migrate inland and gather together on a mountain top. Throughout the journey they will cease feeding and fly for hours upon hours non stop until they reached their destination, a few didn't made it due to old age and illness. The body length of an average mature adult dragon is between 15 to 20 meters and it's wing spans measuring 45 to 60 meters tip to tip, biologists are still trying to unravel the mystery behind it's flight as it is missing feathers and hollow bone both are important traits to achieve airborne in bulky animal. What could be the secret to their flight beside magic?

User G0BLiN has pointed out a very good point in the comment section, marine dragon with hollow bone would face buoyancy problem underwater which is exactly the opposite of shark which I just researched moments ago rely on it's large oily liver for buoyancy.

Symbiosis is defined as:

any type of a close and long-term biological interaction between two different biological organisms, be it mutualistic, commensalistic, or parasitic.

Your dragon has many stomachs and pseudo stomachs.

Liquid at room temperature, the Dinitrogen Tetroxide is drained away and stored in a muscular pouch adjacent to the dragon's anus.

Similarly liquid at room temperature, the Monomethylhydrazine is drained away and stored.

The Monomethylhydrazine and Dinitrogen Tetroxide are held in muscular pouches beneath the tail of the dragon, when the pouches squeeze, the sphincters release, the jets of these compounds mix in a fiery and fierce hypergolic stream of high pressure flame providing directable forward thrust and enabling immediate flight.

This is the same fuel mixture that the Apollo moon landings used for landing and takeoff to orbit and the LEM didn't even have wings.

This is a reaction which can occur in a vacuum and with the appropriate adaptations at the exit port, there's every reason to suppose it could be turned to usefull effect under water. As to the evolution part, just as a squid's defence mechanism is to squirt ink to cloud the water, a natural extention of this adaptation - providing a quick escape from predators would be a burst of rocket speed.

The jumbo jet wingspan of your dragons would support enormous weight. In the case of the jet, 320 short tons. 151.2 tons of Jet-A fuel would take the aircraft 10,800 km at speeds of 907 km per hour.

If the dragon were to fly at 100 km per hour, a five hour flight would take it 500 km, and use much less than the 7.5 tons of fuel that simple arythmetic would indicate because drag would be so much less at lower speeds - lower drag than a jumbo would mean that the lift to drag ratio could be improved over the aeroplane's to help carry those heavy bones.

The difference in the specific impulse of the aircraft's engines and the dragon's fuel is so small as to be negligible.

Start with the flight mechanism of a flying fish. 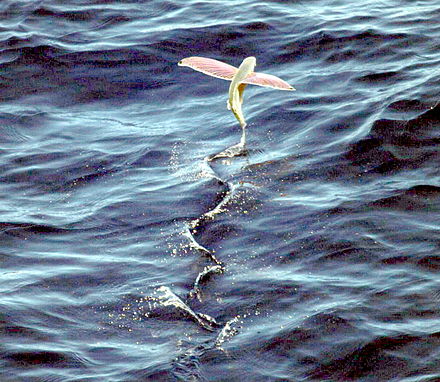 "Flight" in fish has apparently evolved several times. This is not flapping flight but gliding flight, and the fish can take advantage of wind currents etc like other gliders.

Now for your length - the mandated great length is compensated by almost no width. Your dragons are built like snipe eels. 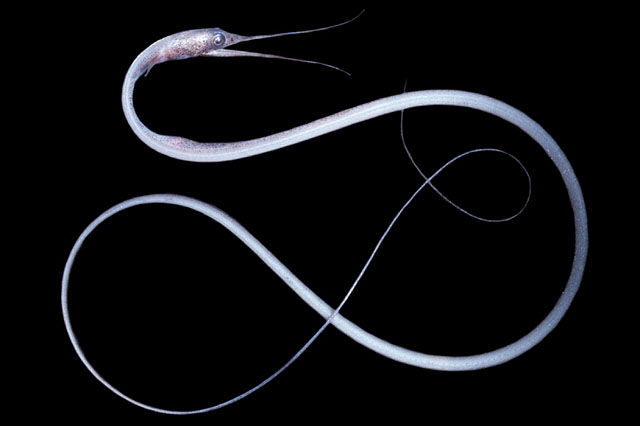 They are very long and very thin. The evolutionary benefit - the tail and propulsion can stay in the water even as the animal gains lift and comes higher and higher above the water. The very long tail allows your marine dragons to keep accelerating until they get high enough above the water to escape the still air immediately above the surface, catch breezes and extend their soaring type flight higher than is possible for flying fishes.

Downside - the dragons strictly soar. I recall reading that some think the largest pterosaurs were also limited to soaring flight.

Hollow bones would cause a buoyancy problem, but only if they are always filled with a gas! What if they are usually full of water while swimming, but the water can drain out for flight? Boom, now you have a swimmer with hollow bones.

1) With the ability to purge the bones of water at will, their bones can be used as ballast tanks!

2) If they can purge them really fast, now they have water cannon rocket boosters!

3) Suppose the bones are usually filled with something more... combustible. now they have rocket engines. Wait, seriously?

4) What if that fuel is usually stored in a bladder organ capable of aerosolizing it, and the hollow bone cavities have piston things inside them? Well, you get your ballasts and your water cannons, plus your dragon is now a Turbocharged Fuel-Injected V8 Propeller Plane with optional Bucket Seats and Bluetooth. Yeah I said it! I build worlds and you can't stop me! But be wary of their predator, the dreaded Used Dragon Salesmen.

Not the answer you're looking for? Browse other questions tagged creature-design evolution dragons flight sea-creatures or ask your own question.

9
What is a good way to explain how a character can produce flames from their body?
5
Could a creature using electromagnetic forces or something to do with ions fly?

181
How could dragons be explained without magic?
8
How can a vertebrate animal evolve for extended flight before living on land?
3
How could a human without bones survive?
9
Does gliding flight give any advantages to dragons in combat?
11
So, how do I put the extra muscle, needed for flight, into a large flying creatures like dragons?
0
can any animals (example dragons) can synthesise pyrophoric subtances and contain it in a special sac (like tert-butyllithium)?
2
How could six-limbed dragons launch like vampire bats and giant pterosaurs?
3
How could humanoids evolve without having once been treedwellers?