Life on a planet with no land near poles

I have an Earth-sized planet in a Milky Way-like galaxy with all the land located at the equator, in a 2000-km line around the planet. There are small islands near the landmass, but no land anywhere near the poles. There are some glaciers, but for whatever reason, none ever formed near the poles or have ever floated there.

What would be the effect on the planet's flora and fauna, besides being well-adapted to heat?

Could this world even exist?

IT actually sounds completely feasible...except maybe the no ice forming on either pole, however some interesting oceanic currents can account for a ice free polar region as heat can be transferred from more tropical regions.

The key reaction that moderates a globes temperature in a water rich world is ultimately the phase change of water. Water takes a silly amount of energy to go from ice to water and water to steam (and in reverse) which acts as a giant temperature buffer. The world you describe here sounds ice less, so the gas to liquid transition of water will be what regulates the temperature...the hotter you get this globe, the more humidity this world will see.

Dustin Jackson is correct...land ultimately reflects the sun's energy compared to open water. However you have not stated how close to the sun this world is and the snowball earth scenario could be avoided simply by saying the planet is closer to the sun than Earth is.

One thing to note is these are always ever changing. If your planet has plate tectonics similar to earth, then the formation your land is in now isn't what it used to be in the past nor will it stay this way in the future (time scale is millions of years here and it doesn't play into a story really). This means you are more creating a snap shot of the environment for a story setting (or whatever reason)...and this snap shot could be taken at a wide variety of times. Your sun could be going through a minimum period that's allowed your globe to cool a bit and introduce an icecap...you could have this as a world that was a snowball a few thousand years ago, but recent changes from a variety of sources (sun output is the easiest) has put the globe into your current conditions.

Biggest difference on Flora and Fauna in a setup like this tends to be lack of isolation. Much of species differentiation occurs because a population is cut off from other populations and evolves based on a different set of pressures. In one giant landmass, this isolation effect isn't as strong and gives more of a homogeneous feel to your land (less species differentiation, one apex predator could theoretically dominate the entire landmass if needed) . Otherwise, it's pretty much where you want it to be...high humidity tends to result in swampier conditions, but there is no reason life couldn't thrive unless you put the temperature range on this planet exceedingly high.

According to this Wikipedia article, a tropical distribution of continents can cause a Snowball Earth because tropical continents are more reflective than oceans and absorb less of the Sun's heat.

Tropical continents are more prone to experience rain which causes erosion. This causes CO2 in the air to be absorbed by the rock which has the potential to lower global temperature over time.

Please note that this equation comes directly from Wikipedia and I am mainly including it for the chemistry nuts ;)

If I understand the Wikipedia article correctly this equation represents a chemical reaction that takes CO2 out of the atmosphere due to silicates absorbing it.

The decrease in CO2 in the atmosphere leads to drops in temperature. These allowed ice sheets to increase in size. The more ice there is, the colder it gets because the more ice there is the more sunlight (and consequently heat) gets reflected. Since there is nonstop ocean virtually all the way to the equatorial continent the ice can continue to grow until it reaches land.

I suggest reading the Wikipedia article as it can describe this much better than I.

Building off @DustinJackson's answer, I'm going to posit a few ways that this planet would be different from earth to avoid an ice age.

First the orbit is a bit closer to the star, this adds more heat into the system. Second, the axial tilt is greater than earths, meaning more of the ocean (and pole) is exposed to the solar insolation. The other pole is going to get cold, but weather will help a bit and keep things circulating.

There will also be a lot more water vapor in the air, and water vapor is really good at being a greenhouse gas. which will help hold the heat in.

I can see storms getting pretty big, with less land to slow them down.

Because of the tilt, the climate will be temperate more than tropical. Maybe Florida instead of Ecuador.

Edit:
Earth's circumference is 40,075 km at the equator. A 2000 km band around the equator would be a bit over 80 million square km. That's basically the same area as Asia, Africa, and Europe, just so you have an idea of how much land you have to work with.

With no separate continents the only thing keeping flora and fauna from distributing evenly around the globe is elevation and natural obstacles like mountains.

Low elevations would be tropical. As the elevation rises you'd get more and more temperate.

About formation. Early on in the solar systems formation, two large mostly molten bodies of roughly the same size collided with a very low difference in orbital motion, meaning it was a "soft" impact. This threw up a ridge at what would become the equator, basically a splash as the molten material was squeezed out, and then it cooled. Over time as this young planet swung through the swirling gasses and material surrounding the young star it picked up an atmosphere and a lot of water. The early impact had shattered the large tectonic plates that had been forming on the two planetoids into countless small plates, which meant that geothermal heat could escape easily, warming the oceans and making them very mineral rich. It also prevented pressure buildups, so there was never enough pressure to create volcanoes that would reach the surface.

I actually disagree with @Twelfth's answer to this question. The biggest regulators on planetary temperature isn't the high heat capacity or heat of vaporization for water, but rather the circulation of the atmosphere and ocean. By moving hot material away from the equator and toward the poles, you keep the planet a much more consistent temperature.

To make such a world possible with that consideration, there's two things that move heat around on planets like this- atmospheric circulation and oceanic circulation.

Solving the atmospheric circulation problem is easy. All you'll have to do is make it a bit smaller than Earth and slow down its rotation. This ensures that there's only two (one north, one south) large circulation cells on the planet and thus an efficient transfer of heat from equator to poles. 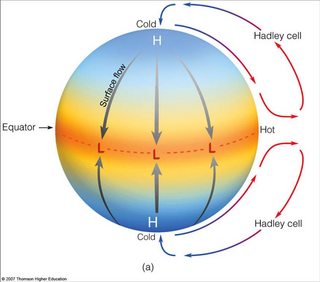 This would actually be aided by the concentration of landmass at the equator- land heats up much more quickly than water, so the rising branch of our circulation cell is strengthened. You've got the smaller planet part covered, it sounds like, because if I understand you correctly then your planet has a circumference of 2,000km instead of Earth's 40,000km. The slower rotation speed reduces the effect of the Coriolis force, which is responsible for breaking up the circulation cells.

The oceanic circulation is a bit more complex. The thermohaline circulation on Earth is powered by deep water formation in seas near the poles, as the result of cold, salty water being very dense and sinking. This pushes water all through our oceans and transfers heat effectively away from the equator. On this theoretical planet, it's hard to make brine via ice exclusion, but we could still have deep water forming as it cools, and sinking at the poles- another circulation cell to regulate planetary temperature. This would be impacted strongly by mid-ocean ridges, but as Twelfth points out, there are going to be bigger problems with continental plates on this planet. I think the oceanic circulation would be a lot weaker than it is on Earth, but would still be moving a significant amount of heat from equator to pole. There would be weak, constant upwelling along the coasts of the landmass, bringing lots of nutrients to the surface and fueling a really productive ecosystem in the ocean and the sea, and a weak world-circling current that wouldn't be detectable to someone in it.

As for the actual question, relating to flora and fauna, I'm not sure they'd be all that different. You might lose some diversity because there are no separations between continents (goodbye, kangaroos) and because you'd only have a rainforest biome. As you point out, they'd probably be better adapted to high temperatures, and if you slow down the planet's rotation then they'll have to be good at regulating their temperatures as they are rotated into and out of the sun. Plants would require larger energy stores to deal with the long periods out of the sun, but animals would still be able to eat like normal. Ocean creatures would be very much the same, although I suppose it's possible that you'd have less plankton and more nekton because phytoplankton would want to avoid being dragged down at the poles and wouldn't be able to hang out in gyres like they do on Earth.

The above commentary assumes that life began on such a world, given that life on Earth probably started in shallow seas or at hydrothermal vents, but that's a different question entirely.

tl;dr: Yes, such a planet could absolutely exist and isn't actually that hard to imagine. Flora and fauna wouldn't be that different, maybe with a drop in biodiversity due to lack of separation and a single biome.

Not the answer you're looking for? Browse other questions tagged planets environment earth-like flora fauna or ask your own question.

14
How can I create an enormous crater?
5
How fast could a climatic change forced by a civilization happen?
9
How would flora behave on a two continent planet?
2
Is it possible to prevent colonization from the sea of one hemisphere from another hemisphere?
10
Where would my hexaped Beast-of-Burden fit into Linnaean taxonomy?
3
Technological Progress of an Ocean Civilization
12
What would the geologic record look like on a planet in the galactic halo?