It has been suggested that I change the word 'slave' to something else, perhaps 'servant'? My intention is to describe a person who is required to work for someone else with no pay. There is no desire for inhumane behaviour to be endemic - undoubtedly some people will want to take advantage of the system more than others.

I reserve the right to change the word if necessary. It won't change the nature of the question.

In this medieval society there is a class of slaves. Let's call them S.

Thus every group known about by the S is both enslaved to one group and master to another in a hierarchy.

What nobody knows about is that this is a ploy by the Grand Wizard. He has created a circular city of huge proportions and the masters/slaves are distributed around it. They are not allowed to travel far and so they don't realise that the system is actually circular. Thus the A are the servants of the Z. This means that every single group is both slave and master.

There are no chairs in the following picture

Each person is supporting the one in front. If you were to put an opaque cylinder in the middle and tell everyone there was a chair supporting 'the last person', they could easily all believe it. 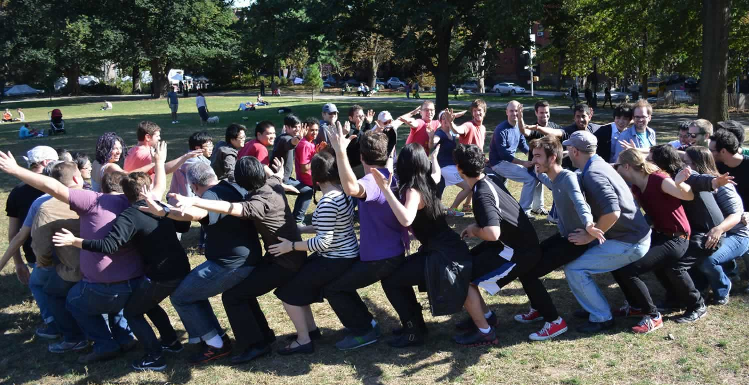 I'm certain that some people would find personal loopholes, e.g. working lazily for a weak master while being simultaneously a tyrant to those below them.

However apart from this unevenness, what, if anything, could stop this circular system of master/slave from working?

My master tells me to polish his boots. I must do it myself. Therefore I instruct my slave to polish my boots (or iron my shirt or whatever), so that I have time to polish my master's boots. This continues around the circle. Note that each of us also has their day job.

this doesn't work. it breaks down instantly.

Social tiers work because people do different things, there are farmers and people who can tell farmers what to do. Division of labor is inescapable and absolutely essential to the existence of a city. The system breaks down almost instantly as no one wants to farm. So the first group ordered to farm gets stuck with the lard labor and whomever they can order become an aristocracy. Because the farmers can't actually offload any labor. Some jobs are inherently less desirable, with less free time and harder labor, this is especially true prior to industrialization.

Cities are not self sufficient they need a steady influx of food from farms. but a farmer has to produce more food than they can eat otherwise there is not other jobs, everyone is a farmer, no one is backsmith, or a guard. And that means you don't have a city anymore. The backbone of feudalism is the people who farm vs the people who control farmers. This division happens almost immediately in your scenario.

If you give up on the idea of a city they everyone farms just enough to feed the next person in line, but that means that is all they do, they are all subsistence farmers with a weird sharing mechanism. Farming efficiency scales drastically, that is growing half a acre of crops does not take half the labor, in fact it takes substantially more than half. If everyone farms just enough to feed the next guy in line, there ARE no other jobs, and there is no city just circular ring of farms, up until the first shortage, then there is just a war.

As Alex points out, the only way you can have both is if the "slave" part of your daily activities are some minor they don't really impact your job, AKA you can't order someone to farm or anything specialized only things everyone does. In which case your back to not having a system supporting specialized labor. You then need real slaves and serfs to do the undesirable jobs.

Labor in a medieval society require specialization, but different "jobs" have different desirabilities and labor requirements. If people can be ordered to do undesirable jobs then people are getting stuck at the bottom and you have real stratification, If they can't be ordered to do such things then this has no impact on division of labor, and little impact on task period, so you need a different system for division of labor.

A picture is beginning to form of this society. It is interesting, and it has a weak spot.

The idea of paying money for the time of another person (employee-employer relationship) is just a recent (17th century) phenomena. Previously, one was either an independent merchant/businessman or a slave. Most slaves were either apprentices (intending one day to be their own independent merchant/craftsman) or household servants. It was the success of the individual merchant/craftsman that determined the level of 'maintenance' of his servants. The exceptions were people who worked for the court - armies, bureaucrats, pencil pushers - who were necessary for the huge operation of the state. Servants (or 'slaves', same thing) were maintained by their masters, but the numbers of state 'servants' were so vast that they were 'paid' in lieu of being 'maintained' (they could not all be 'fed' by one person). A hierarchy of 'ownership', where the king maintained those in the court, who maintained those bureaucrats below them, who maintained the remote bureaucrats, who maintained the 'go-fors' below them, and so forth. (The beginning of the 'framework' of the modern corporation).

Your system seems to completely eliminate the individual craftsman/merchant. Everything is made or done for the person 'above' you. And they sell it at market for the person above them. (Much like in a huge corporation today - the fruits of your labour are for the benefit of the person above you, and you are simply 'maintained' (paid) by the corporation for doing so, except that there is no one at the top of the food chain, no 'Mr. Big'.) The wealth of the economy just keeps going around in a circle. Indeed, everyone would be maintained, and in turn maintain, someone else.

But no matter how you make it a 'circle', it belies the point that everyone is indeed working for the Grand Wizard, who is the ultimate planner.

EDIT It would seem that, the 'office of the Wizard' would need 'injection points' throughout the circle. That is, agents of the Wizard who would appear to be normally part of the master-slave chain, but who would indeed be under the direction of the Wizard, to inject planning, scheduling, and grand objectives equally around the circle, so that there were no signs of an ultimate 'head office' except some nebulous 'way above my servant-grade level' that remained forever at an unreachable 'corporate' level. This system would work only if the agents of the Wizard Head Office' were completely hidden from the public. END EDIT

In such a scenario, there would not seem to be any room for the independent craftsman/merchant, the person who makes something and then sells it at the market. He neither takes direction from a 'master' nor does he maintain a 'slave'.

So your weakness would be in the rise of this category.

As more and more of this 'special group' arose, they would start to break the chain. Although they would have slaves themselves, they would not have masters. It was, in fact, the rise of the merchant class that caused the demise of the British monarchical system, and the subjugation of the monarch to the whims of the newly wealthy merchantmen.

The continuation of the system would, indeed, seem to depend on the ability of the Grand Wizard to prevent this independence, and to somehow heavily 'consequence' anyone if they became independent of the chain.

For insight into the independent merchant/craftsman, it is useful to research the rise and fall of guilds. For instance The Rise, Persistence and Decline of Merchant Guilds. Re-thinking the Comparative Study of Commercial Institutions in Pre-modern Europe to aid in understanding how the rapid adoption of 'paid employment' and 'vertical integration' of production led to the demise of the independent merchant/craftsman as the main driver of production in the 17th century and beyond.

Specifically from the above reference

It seems appropriate to think about commercial institutions as a continuum along the lines suggested by Williamson. At one end, there is a perfectly atomised market in which anonymous buyers and sellers meet in fleeting encounters of voluntary exchange. At the other end, all risks and decisions are incorporated into one large hierarchically organised and vertically integrated firm. Human ingenuity has produced endless permutations along the continuum between those two points, characterised by more or less anonymity, hierarchy, market control, political involvement and so forth. Following Williamson’s distinction between markets and hierarchies, we view social networks, nations, consulates, guilds, and regulated companies as institutions that perform the same basic economic function – the governance of transactions – and differ merely in the degree of control delegated to fellow merchants. This approach allows us to include merchant communities operating in different parts of Europe over a very long time period (1000-1800) in one data panel.17

It seems that the question is proposing a 'hierarchical' system that ultimately wraps around on itself.

In addition to other objections, I'd add hierarchy. Not in the sense of who owns who, but of how many slaves an individual master owns. It's clear that, in order to fulfill the OP, on average each person can only own one slave. And it's not at all clear that this is going to make a whole lot of sense. 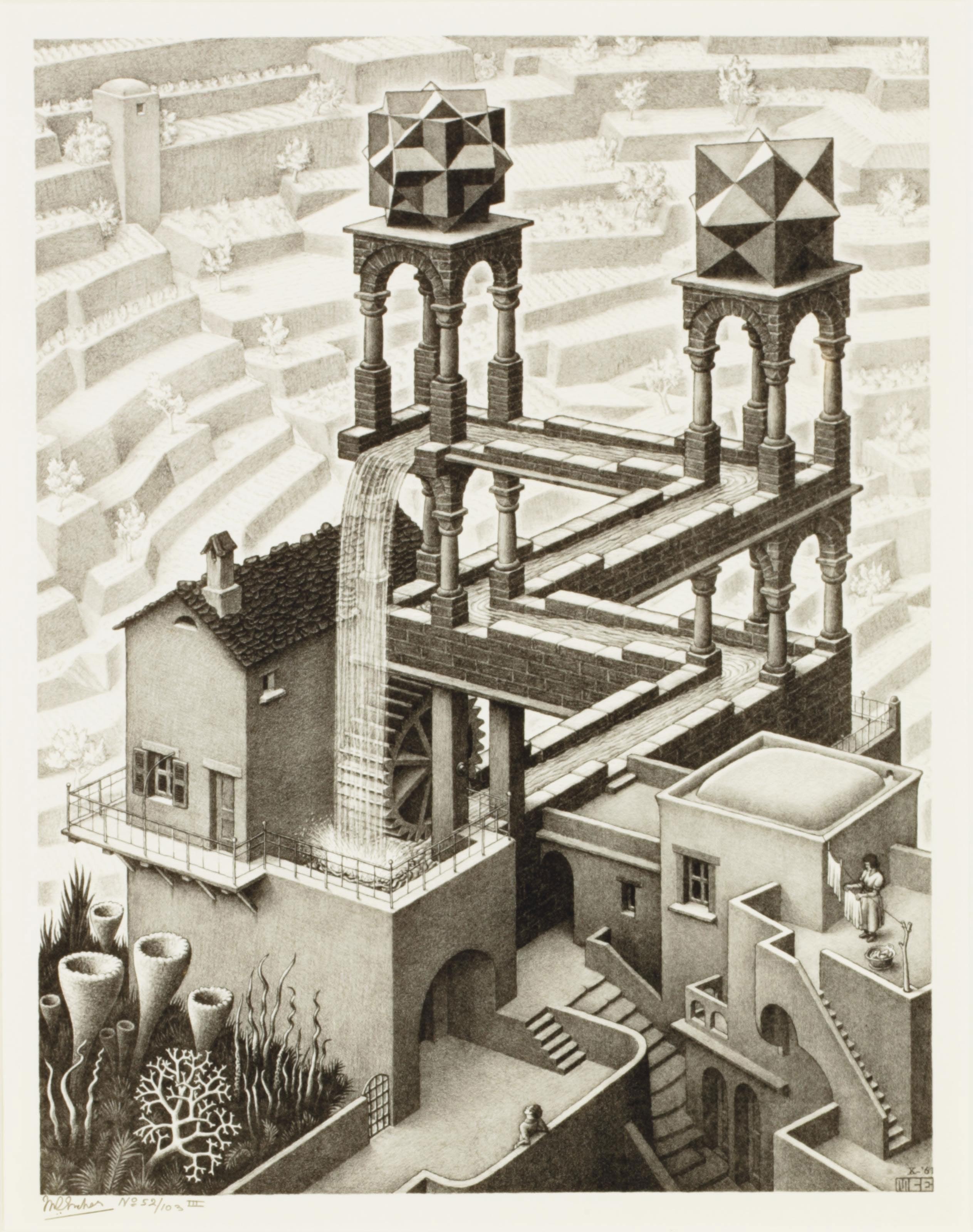 Not the answer you're looking for? Browse other questions tagged reality-check medieval slavery .

41
Why would someone want to be free if slavery offers better quality of life?
5
What are the quirks of half-breed slavery?
25
Why does this one planet still have slaves?
7
How many generations to lock in androgynous human characteristics?
22
How could a goverment sell prisoners as slaves (without giving advantage to richs)?
26
Why would an advanced civilization even want slaves?