Would plants on a planet orbiting a star like ours, have any different color?

So I'm currently designing an alien habitable planet that orbits a star similar to our Sun. Assuming that the composition of the planet's atmosphere, as well as its pressure, are similar to the ones on Earth, would plants on this planet have any other color than green?

Plants come in many colours anyhow, Chlorophyll making the base colour green for most, other pigments occur naturally too; Carotenoids - ranging in colour from yellow/brown to dark green, Betalain - red and yellow, Anthocyanins - red purple or blue.

Chlorophyll is of course green but if your plants used other compounds instead they could be different colours.

it is considered the world's most important reaction since it is the beginning of the food chain. Therefore, a plant without water will not hatch, since the free chemical energy that is released with the breakdown of the molecule of water is essential to boost consequential reactions

Nanotechnology to generate electricity - electron/proton gradient pumps have evolved in the above forms. They have also been created by people in so many forms: Honeycomb graphene structures, copper indium selenide sulphide quantum dots, graphene sheets, graphene coated with zinc nanowires. If we can make it, who's to say it can't evolve in nature and better. Curiousley, many of them appear blue/black.

Ways to produce colour effects without pigment such as by constructive and destructive interference on a nano-scale such as in butterfly wings could evolve. 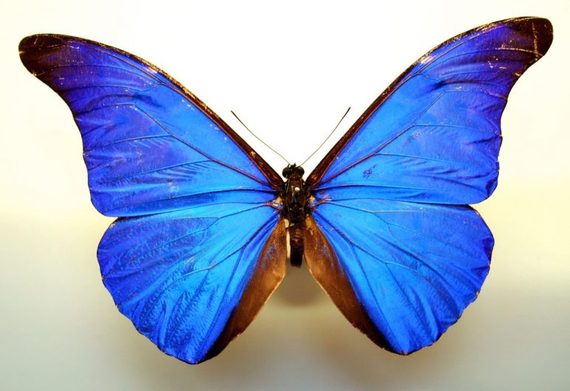 In fact they have: 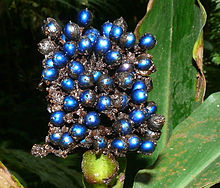 Your options are open wide.

There are multiple theories, why clorophyll is dominating on Earth. Source

One theory is that early oceans were filled with purple microbes called archaea. The light-sensitive molecule in these microbes is called retinol, which absorbs green light and reflects red and violet light, which makes them appear purple. So parts of the earth could have looked purple! All the green light was taken by archaea, so chlorophyll had to make do with blue and red light. However, chlorophyll-based life became much more dominant because even though it uses less of the light spectrum, chlorophyll is much more efficient.

Another theory is that absorbing too much light could damage the plant more than it would help, much like how when we get too much sun, we get a sunburn. So it could be beneficial that the plants are getting less light.

So I assume, that if everything is similar (distance to sun too), then sooner or later clorophyll is going to take over. But, if the distance to sun is different, or temperature is different, there might be a need for more efficient photosynthesis - it could work with different molecules on different wavelengths.

One of the big factors that give (most) Earth plant-material it's predominant green color is the chemical Chlorophyll. This is a major component of the chemical complex that allows a plant to absorb solar energy.
On a different planet, with total different biology the odds are high that "plants" or their local equivalent use something entirely else and therefore may have radically different colors even if everything else is much the same as on Earty.

E.g. If you local plant life, due to its chemical/biological composition, is most efficient in absorbing energy in the blue and UV part of the spectrum, it wouldn't make much evolutionary sense for those plants to have blue/UV colors as every bit of light in those colors reflected isn't benefiting the internal workings of the plant. So those plants would probably reflect anything BUT blue/UV and look to be yellow/orange/red in color.

Not the answer you're looking for? Browse other questions tagged earth-like flora colors or ask your own question.

14
Do different star types produce plants with different properties?
4
What colour would leaves be in a hydrogen-based atmosphere?

11
What effect would a red sky and/or sun have on plants and animals?
14
Do different star types produce plants with different properties?
5
What would be the most likely colour of leaves on plants on a planet orbiting a red dwarf?
30
Terrestrial Exoplanet Skies – I've Built a Visual Sky Chart. Is it Correct?
29
Can a planet harbor plants of different colors without one pigment outcompeting the others?
4
Purple plants on a planet orbiting a green star?
8
What color would plants orbiting a white dwarf have?
6
Would Chemosynthetic plants have any reason to grow tall?